Do you ever make rice pudding? I do, as a dessert. I use a recipe (Gâteau de riz au four) from the book called Cuisine pour toute l'année (1969) by Monique Maine. One of the big differences between this recipe and most rice pudding recipes is that Maine's doesn't have any eggs in it.

The other day we were going to make a meat fondue — une fondue bourguignonne, from Burgundy — and I was trying to think of what we would have with it. Pommes frites was one idea, but I thought the French fries might just get cold while we were busy cooking chunks of lean beef in hot peanut oil at the table.

Another idea was to make a gratin dauphinois — potatoes au gratin cooked in cream or milk — but I just had a few little potatoes left in the cellar — the bottom of the bag. And then I thought about rice. Specifically, rice pudding. What about a savory — salty rather than sugary — pudding of rice and milk, flavored with onions, carrots, and celery?

It turned out to be really good. The cooking time is long —60 to 90 minutes — but the prep time is minimal. You do have to dice up an onion, a carrot, and a stalk or two of celery. After that, there's not much to it. Here's the recipe: 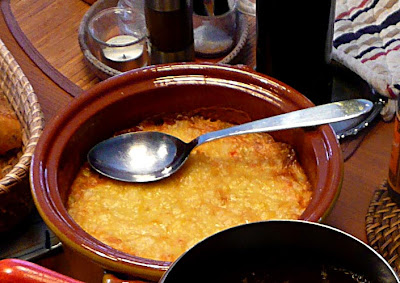 Add the chopped vegetables and the bay leaf to the milk in a saucepan and bring it to the boil on top of the stove. Meanwhile, rinse the rice thoroughly in a strainer under cold running water.

Add the rice to the boiling milk, pour the mixture into a baking dish, and bake, covered, in a 300ºF (150ºC) oven for 60 to 90 minutes, until all the liquid is absorbed by the rice. Optionally, at the end of the cooking time scatter grated cheese over the top of the pudding and let it melt in the oven, uncovered.

Cool slightly and serve hot or warm by spooning the pudding out of the baking dish at the table.

Monique Maine's rice pudding recipe calls for the same amounts of milk and rice, but also three-quarters of a cup of sugar and a teaspoon of vanilla extract. She makes a caramel (sugar and water) in a serving dish, packs the cooked rice pudding into it, and cools it in the refrigerator for three hours before unmolding and serving it.
Posted by Ken Broadhurst at 07:52