If I steady my camera on a support post out in the vineyard, I can actually get a fairly clear image even at dawn — that means about 8:30 a.m. And on a Sunday, that's before the hunters show up. Here's an example. 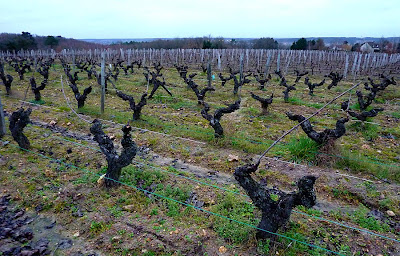 The vineyard on January 22 — the vines
have been pruned, leaving just one cane
That doesn't mean that there are a lot of interesting things to take pictures of. But at least the photos aren't too blurred. Reminds me of the restaurant that has mediocre food but big portions. Sometimes the top of the support post isn't level, so I end up with pictures like this one: 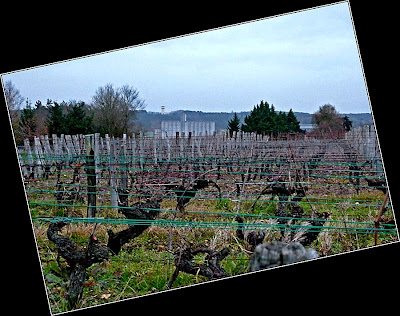 The grain silo and water tower in the distance are on
the other side of the Cher River from our house.
Here comes another gray morning. Isn't that a line from an old song?
Posted by Ken Broadhurst at 08:16