The little almond cakes called Financiers got that name because they are usually made in a pan that gives each cake the look of a little gold bar. They're golden brown. Financiers seem to be either French or Swiss in origin, depending on the source you believe. The recipe has been around for about 125 years. 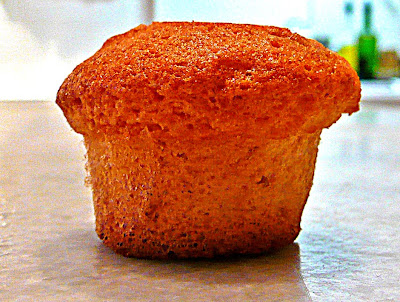 An almond-flour mini-muffin made with Financier batter
I made a batch of Financiers yesterday, but instead of cooking them in the shape of gold bars, I cooked them in the min-muffin pans that Walt bought at the supermarket in Blois a few days ago. They are little muffins that are almost bite-size — or if you don't have a big mouth, each one might take you two bites to consume! You could also cook the batter in a madeleine pan.

Golden mini-muffins cooked in purple pans
Financiers are a good way to use up the egg whites you save in the freezer after using just egg yolks in French sauces and stuffings or for making your own mayonnaise or hollandaise sauce. You know, you could make them with those egg substitutes called Egg Beaters that you buy in American supermarkets. They are mostly egg whites with yellow food coloring in them — aren't they?

Cooling on a rack, they look a little like mushrooms
To make them really low in cholesterol, substitute vegetable oil or margarine for the butter. I think they'll still be good. And to make them gluten-free, make them with almond powder only instead of half almond powder and half wheat flour. And finally, this recipe calls for beaten egg whites, but others Financier recipes I've seen use the egg whites as is. Since there's baking powder in the ingredient list, beating the egg whites isn't absolutely required, but will make the cakes lighter.

Here's the recipe in my translation. The original recipe is one I got off marmiton.org and it's in French, but it says this is an Alsatian version that is also called Eiwisskuche out there on the French-German border. 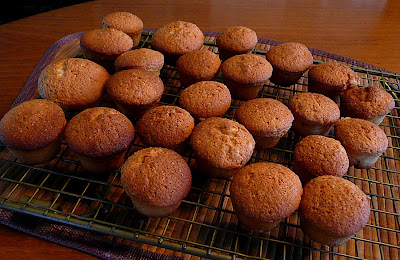 Beat the egg whites with a pinch of salt and half the sugar until they're fairly stiff.

In a separate bowl, combine the flour, baking powder, almond powder, and the rest of the sugar.

Bake in silicone mini-muffin pans for 15 minutes, until golden brown. Test for doneness with a wooden skewer. Unmold the muffins after they have cooled slightly.

The fluid-ounce quantities in the recipe are approximate but they'll work fine. I've also cooked the Financier batter in a regular cake pan and then cut the cake into squares after it has cooled completely. That works too.
Posted by Ken Broadhurst at 09:36