The "snowstorm" turned out to be a mere dusting in the Saint-Aignan area. Instead of 2 to 4 inches, we got what looks like less than an inch of the white stuff. As a friend from Buffalo described some of my pictures of Saint-Aignan snow a few years ago, it looks like a sprinkling of talcum powder. 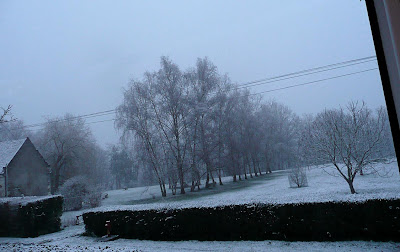 The view out the kitchen window late yesterday afternoon
I haven't been out yet. Walt took Callie for her walk yesterday afternoon. It wasn't all that cold yesterday during the day. The temperature was just above freezing, and our thermometer shows 0.0ºC this morning — that's 32ºF. Its supposed to get a lot colder over the next few days. 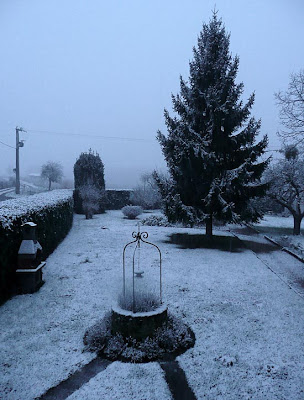 Looking out the guest bedroom window
late yesterday
This snow shower was caused by cold air moving in from Russia in the east and a warm front moving down the coast from the North Atlantic and the British Isles. Obviously, the cold air got to Saint-Aignan first and kept the main part of the precipitation east of us. This morning's news reports are coming from Chinon, where it seems the snow was heavier. 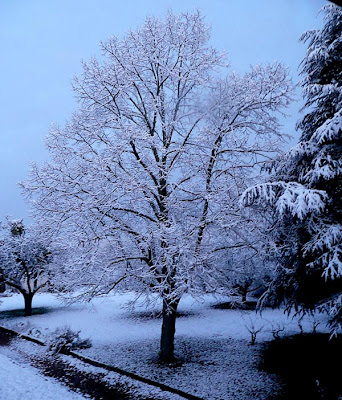 The linden tree out back early this morning
P.S. It's after eight in the morning and there's enough light to see outside. The snow is pretty and more must have fallen overnight, making the neighborhood and woods into a winter wonderland. 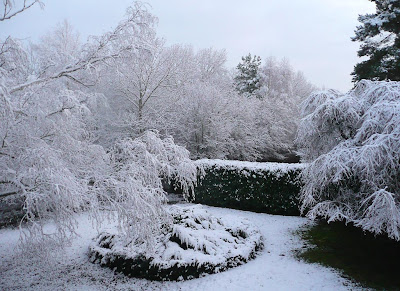 Isn't it true that the season's first snow always looks beautiful?
Posted by Ken Broadhurst at 07:00