Life here in Saint-Aignan is cycles and seasons. The seasons are long enough that you are almost surprised when they change and a new one settles over you. Being an amateur gardener and an amateur cook reinforces the seasonal changes. You have to notice the seasons and the weather when you have things growing in the garden — or not — and something fresh and seasonal cooking in your kitchen, in a pot or in the oven — nearly always.

So it's wintery-feeling now, and dark. It's not too cold — yet — and tant mieux for that. But it's time for winter eating. The garden is mostly cleaned up and will lie fallow for months — growing anything much will have to wait until at least next March. Most importantly, it's time to cook winter foods. Vegetables: endives, cabbage, cauliflower, and so on, with a rich chicken broth or a thick cheese sauce. It's time for winter cheeses, the kind you melt and eat hot: Gruyère, Comté, Cantal, Beaufort, and Cheddar. 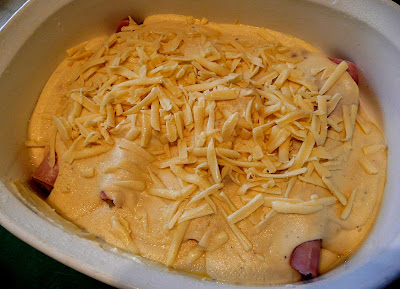 Cook the endives, wrap them, and make the gratin up to this
point. Put it in the fridge until you're ready to bake it.
So here it comes around again. A few days ago, it was time for Gratin d'endives au jambon. And today it'll be cabbage with sausages, carrots, and boiled potatoes, in chicken broth with wine. But first the endives, or Belgian endive as they are called in the U.S. I understand they are very expensive over there. Here in France (and Belgium too, I'm sure), fresh crispy endives are inexpensive. They can qualify as an everyday food of the season — cooked, or raw in salads.

I've been cooking them into a gratin with ham once or twice a year for 25 years now, and I never get tired of them. Making them for the first time each autumn is almost a ritual. Cook the endives in a pan with butter, white wine, garlic, and either vinegar or lemon juice. Wrap the cooked endives in slices of ham. Make some sauce béchamel with cheese — that's called sauce mornay — and cook the ham-wrapped endives in it, with some grated cheese on top. Eat and enjoy. Feel warm. 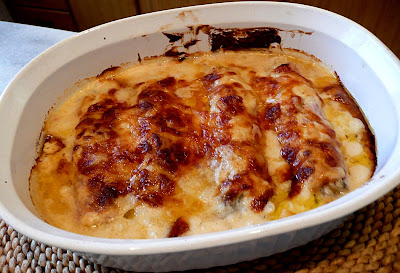 The autumn 2011 version of Gratin d'endives au jambon.
I've posted recipes and pictures at least a couple of times before. Here are the links: 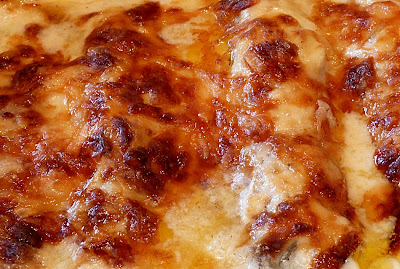 An effective treatment for the winter blahs
This blog has officially entered into its seventh year of existence. I don't know when I started posting every day, but that happened sometime along the way. I'm really aware of repeating myself right now. Maybe it's my age. There isn't much new under the sun. The seasons, they go 'round and 'round.
Posted by Ken Broadhurst at 06:24