Pumpkins are back in fashion in France. People used to cook and eat them 75 years ago, but by the 1970s you almost never saw them on the markets in France. The wave of popularity of the American Halloween holiday in France has reinforced the trend to grow and try them again.

That said, I remember a pumpkin soup that I had in a little restaurant somewhere out in the French countryside back in the 1970s, when I lived in Paris. I have no idea where the restaurant was located — not even the region. All I remember is sliced pumpkin, potatoes, and onions cooked in a rich broth with milk added. It was warm and well-seasoned. I think I had never before heard of pumpkin soup at that point in my life.

Walt and I have grown pumpkins of different kinds, as well as butternut-type squashes, for years now — ever since a woman in the village gave us some seeds. She said they were seeds of a courge or squash called une sucrine, which had sweet orange flesh. It was basically a butternut, as it turned out, but a local French variety. 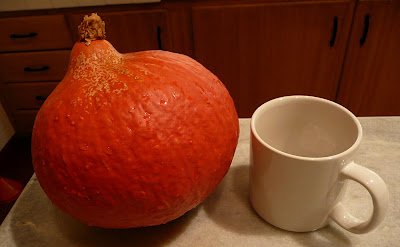 This is a potimarron or red kuri squash, with
a coffee mug for scale.
This year, Walt grew small winter squashes that are called potimarrons in France. Poti- because they look like little potirons, or pumpkins, and -marron or chestnut because they have a that flavor. A potimarron is about the size of a volleyball. Wikipedia says it's called a red kuri squash in English.

I made soup out of one yesterday. I peeled and seeded the squash and cut the flesh into half-inch dice. That gave me about three cups, and any pumpkin or winter squash will do. I peeled three "soup potatoes" (russets would be good, because you want potatoes that will melt into the soup) and cut them into similar dice. Two cups of potato is about right. Then I put all that in a pot with some melted butter, a chopped shallot, and salt and pepper, and I let it all sort of cook down together for about 10 minutes on low heat, with frequent stirring.

At that point, pour in enough water (or light vegetable or chicken broth) to cover all the ingredients, drop in a couple of bay leaves, and let the soup cook until much of the pumpkin and potato has disintegrated into the soup liquid — at least 30 minutes. Before you serve it, you can puree the soup with a stick blender if you want to, but I kind of like leaving some soft chunks of both pumpkin and potato to eat along with the broth. 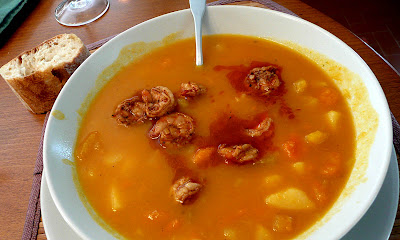 What is that in the soup?
As a garnish, garlic croutons made with either butter or olive oil would be good. How do you make croutons? Put a couple of tablespoons of oil or melted butter into a salad bowl. Cut bread into half-inch cubes, with or without the crust, and then toss the cubes in the oil or butter the way you would toss a salad. When all the bread cubes have some oil or butter on them, spread them out on a baking sheet and put them into a hot oven for three or four minutes, until they're golden brown and crunchy. Add them to the soup at the table.

The garnish I made for the pumpkin soup yesterday was spicy shrimp. The shrimp went really well with the pumpkin flavor. I put the peeled, deveined shrimp — a dozen or more for the two of us — in a bowl and seasoned them with some chopped garlic, chopped ginger, cayenne pepper, smoked paprika, sweet paprika, and black pepper. Then I poured in a little oil and tossed the shrimp in it to let them marinate for 15 minutes. Finally, cook the shrimp in a hot skillet, adding a quarter cup of dry white wine right at the end to deglaze the pan. 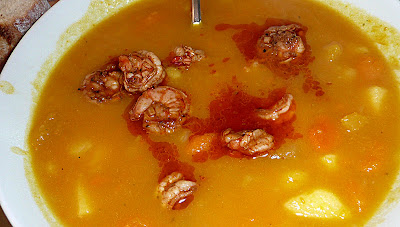 Sauteed spicy shrimp is the answer.
Serve the spicy shrimp at the table the was you would serve croutons. The spiciness of the shrimp and a little of their cooking liquid complement the slightly sweet, slightly bland pumpkin soup really well.

By the way, we got the car back, and Walt was able to drive without much trouble but with considerable pain. He said the seat in the VW Polo that he had to sit in for 10 minutes as we drove to the garage where the repaired Peugeot was waiting was the worst. He was in agony at that point. The Peugeot seat was more comfortable. Things are finally getting back to normal around here — except of course for Walt's pinched nerve. He sees the kiné again this morning.
Posted by Ken Broadhurst at 06:48