We drove from Saint-Aignan to Champagne last Monday, getting on the autoroute at Blois and driving past Orléans, Pithiviers, Montargis, Sens, Troyes, and Châlons-en-Champagne as we made our way east and north, avoiding the Paris area. The trip took about five hours, including a stop to get some lunch along the way in one of those autoroute service areas. Champagne is about 90 miles east of Paris, and Saint-Aignan is 140 miles (basically) south. 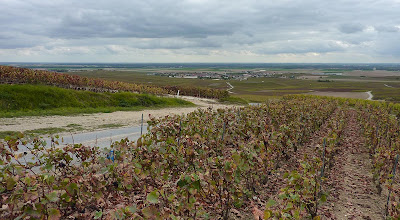 Bouzy seen from up in the vineyards above the village
Our destination was the village called Bouzy, which is approximately 10 miles from Epernay (a small city) and 15 miles from Reims (much larger). Bouzy in on the south flank of what is called the Montagne de Reims, where the prime champagne-grape growing areas are located. The "mountain" is not very high — it tops out at 200 meters (650 feet), rising above but not towering over the surrounding plains. 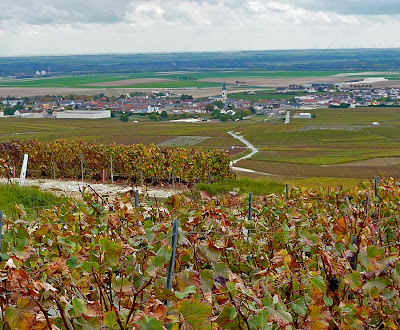 A slightly closer view of the village of Bouzy in Champagne
The top of the Montagne de Reims is covered by forest, and the flanks of the mountain are covered by extensive vineyards. The main grapes grown there are Pinot Noir (the same grape grown in Burgundy) and Pinot Meunier (a grape used only in champagne production, as far as I know). Both grapes are called « raisins noirs à jus blanc » — red grapes that produce white juice. 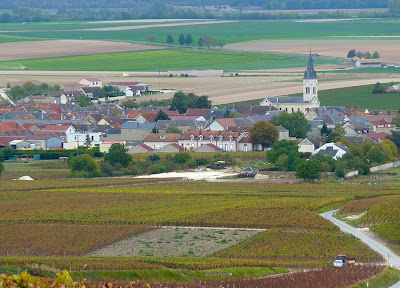 And even closer — the house we rented was very close to the church.
The soil in Champagne (the region gave its name to the wine) is chalky. That's what gives the grapes, their juice, and the wine its distinctive flavor, apparently. Most champagnes are made from a blend of grape juices — Pinot Noir, Pinot Meunier, and Chardonnay — from different years. The main Chardonnay vineyards are located south of the Montagne de Reims, east of Epernay, in an area called La Côte des Blancs. 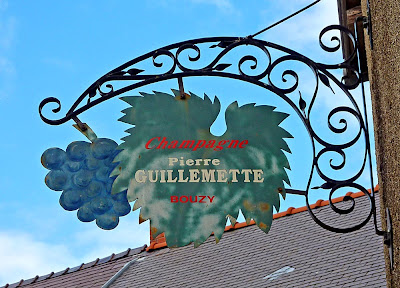 Monsieur and Madame Guillemette own and operate a couple of
gîtes ruraux as well as their own champagne business.
Around Bouzy, the predominant grape is Pinot Noir. The champagnes made there are called Blancs de Noirs and contain mostly, though not exclusively, Pinot Noir juice. They are fruitier than the champagnes made from other blends or from Chardonnay juice exclusively, to my taste buds. The village also makes a red wine called Bouzy Rouge, which seems to served chilled. It's a very light red from Pinot Noir — almost a rosé, really. 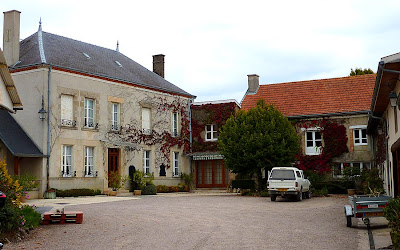 Just across the street from our gîte was this champagne house
run by a man named Georges Vesselle.
The reason we went to Bouzy, pop. 900, specifically, was because I found an attractive-looking gîte rural there. It was a big old house with three bedrooms, a bath-and-a half, and an enclosed courtyard where the dog would be safe. And the owner accepted renters with pets — many gîte owners don't allow animals. According to the Gîtes de France web site, the house was equipped with wifi for Internet access, but when we got there the owner told us it didn't work. So we were cut off for the duration of our five-day stay. 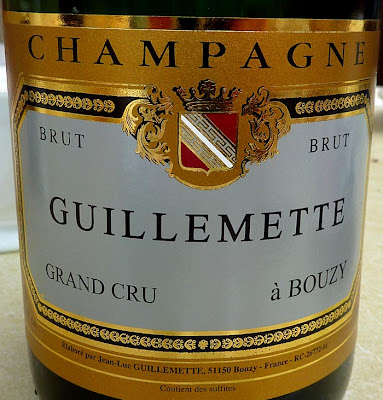 The local potion
The house was plenty big for the three of us (humans) and Callie. It was decorated in an old-fashioned style that might best be described as shabby-tacky, but what the heck. The kitchen was equipped well enough, there was TV and radio, and there were two or three champagne producers within a hundred meters or so. Also, there was a boulangerie within easy walking distance.