The sun came out yesterday afternoon, almost unexpectedly. We're staying in for the next few days while Walt tries to recover from his pinched nerve and his cold — yes, he's caught an autumn cold. He has another session with the kinésithérapeute on Monday. My only sorties will be walks with the dog in the woods and in the vineyard. 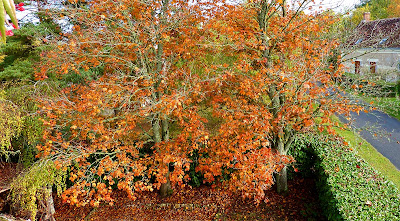 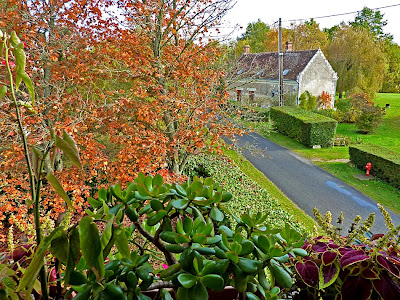 Maple trees out front from an upstairs window yesterday
It's not cold at all right now — in fact, temperatures are 5ºC/ 10ºF above normal, according to the weather reports on TV. But it's rainy, or at least threatening rain most of the time. The heaviest rain is still down south on the Mediterranean coast. 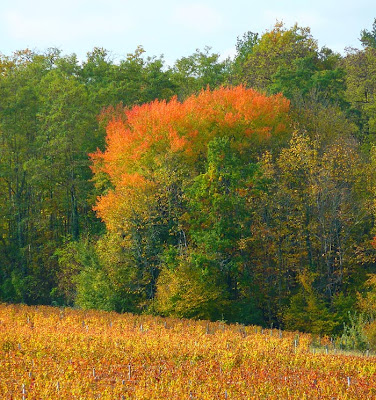 A tree out on the edge of the vineyard looks
like it's on fire.
Saint-Aignan is having its annual Fête de la Saint-Simon this weekend. Attending doesn't appear to be in the cards for us. It's a big sidewalk sale/flea market. People will be out drinking the season's new wine, called la bernache — it's wine that hasn't finished fermenting yet and hasn't been filtered. The taste is sweet and tart, but people always tell you not to drink much, because bernache has a definite laxative effect.

Here in France we'll be turning our clocks back an hour tonight. So the sun will rise not at 8:30 but at 7:30 for the next few months. Or maybe at 8:00, as the days get shorter and shorter until December 21. And night will fall in what a few months ago felt like the middle of the afternoon...
Posted by Ken Broadhurst at 07:32