We had driven all the way down the Côte des Blancs, from Epernay to Vertus and Bergère-lès-Vertus, finishing up at the top of the Mont Aimé to see the view from there. I noticed on the map that the area just to the south was a described on the map as a swamp — les Marais de Saint-Gond — and I wanted to see it before returning north to Epernay and Bouzy. 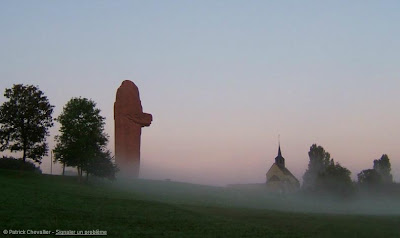 I grabbed this picture off Google Maps — it's what we saw
from a distance as we drove through the Saint-Gond "swamp."
From the road we were on — the D45 through Vert-Toulon to Broussy-le-Petit, and then joining the D44 toward Reuves and Oyes — we couldn't really see much besides fields, woods, and pretty villages. It was getting late in the day and I didn't want to turn off onto really small roads to see if we could find an actual swamp or marsh. 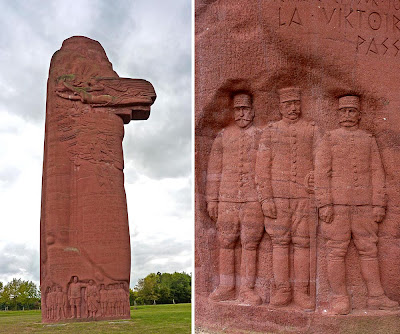 Le Mémorial de Mondement, in the Marne
At one point, the D44 and the D45 diverged. We took the fork to the right to head back north. Off to the south, however, we could see a gigantic tower or obelisk of some kind, sort of up at the top of a hill. I hadn't seen anything on the map or in the guidebook about it. "Tant pis," I said to Cheryl, "let's make tracks for Epernay and get back to the gîte. I don't know what that big monument might be." Walt was snoozing in the back seat, and Callie was, as always, hunkered down on the seat too, beside him, refusing to even look up and see what we were driving by. 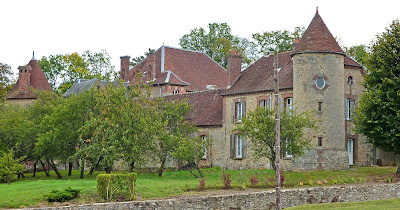 Le Château de Mondement
Just then we approached a little crossroads, with a car sitting at the stop sign on the right. It crossed in front of us, driving up a lane that seemed to lead up to the big pinky-orangey tower with the funny nose on it, making it look like some strange tomahawk. I made a split decision and turned left to follow that car. As we approached, we could see how enormous the monument really was. 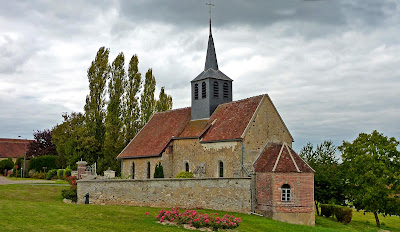 This pretty church is next to the Mondement Memorial.
It turned out to be the Mémorial de Mondement, on the territory of the village of Mondement-Mongivroux, erected to mark the French victory over the Germans at the first battle of the Marne, in September 1914. The memorial is more than 35 meters — 115 feet — tall and constructed of poured concrete over a steel frame. Just across the road is the Château de Mondement, and on the other side a pretty church surrounded by an old graveyard. 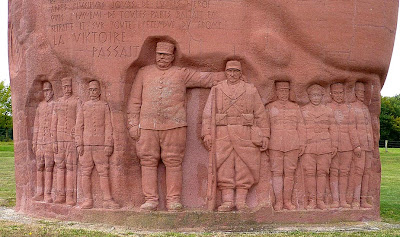 Le Maréchal Joffre, among other officers and soldiers
The Mémorial de Mondement made a nice rest stop for us. Callie got out of the car and stretched her legs. Cheryl and I took a lot of pictures. Walt stretched out on the grassy knoll on which the memorial stands and continued his nap. We still had a 30-minute drive back to Epernay and Bouzy ahead of us.
Posted by Ken Broadhurst at 07:35