These are some more pictures that I took during our drive down the Côte des Blancs from Epernay to the little town of Vertus about 10 days ago, in Champagne. We had spent part of the morning talking to Jean-Luc Guillemette in Bouzy and going down to explore his family's wine cellar. 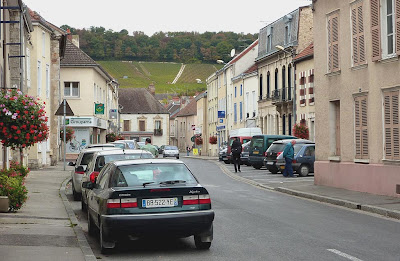 In the little town of Vertus, vines grow
on the hillside above the streets and houses.
The weather had turned much cooler and breezier since our arrival in Bouzy, and we had even had a few rain showers. Luckily, the clouds broke that afternoon, at least partially, and we decided to set out and do some sightseeing. I really enjoyed being out in the fresh air and taking in the sweeping vistas from the road that runs down the Côte des Blancs.

Looking out over Le Mesnil-sur-Oger on the Côte des Blancs
Remember that you can click on the pictures to see them in a larger size.
Champagne is the northernmost wine region of France. Grapes have been grown there for many centuries, but the process for making the wines sparkle is only a couple of hundred years old. Because champagne wines are good made in a very dry style, the grapes don't have to be completely ripe when they are picked. For sweeter champagnes, and even many of the dry versions, sugar is added in the wine-making process (which is called la méthode champenoise). 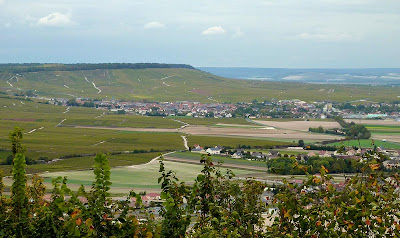 Looking north from the top of Le Mont Aimé (240 m) toward
the village of Bergères-les-Vertus and the town of Vertus
Actually, the city of Reims is farther north at 49º latitude than Quebec City or Fargo ND (both at 46º) or Seattle (47º). Vancouver BC is at the same latitude as Reims. No U.S. city outside Alaska is that far north, not even the most northern towns in Maine. Saint-Aignan, like Seattle, is at 47º north. Maritime influences, mainly the Gulf Stream, make northern France much warmer in winter than places like Fargo or Quebec City. 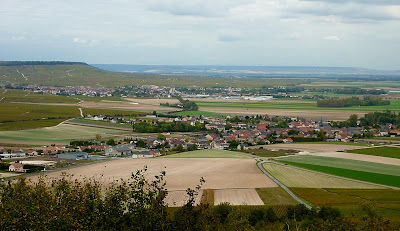 Closer, with the Montagne de Reims in the background...
Still, frost is a problem in the Champagne vineyards, especially in the spring. If the tender new flower and leaf buds on the vines freeze, the year's grape crop can be severely reduced. Because the grapes are picked before they are over-ripe, frost in autumn is not such a big danger. In fact, Jean-Luc Guillemette in Bouzy said that because of climate change, the grape harvest in Champagne now usually take place in September, while the weather is still warm, rather than in October as it did 25 or 30 years ago. 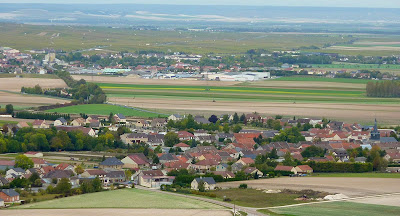 ...and closest
All this rambling about how far north we are here also has me thinking about how short the days are now. This morning the sun didn't come up until 8:15. In two weeks, we'll change the clocks back, so that it will be light an hour earlier in the morning but also dark an hour earlier in the afternoon. In December and January, the sun goes down as early as 4:30 p.m. To prepare, I'm busy a few hours each day getting the garden cleaned up and raking up autumn leaves.
Posted by Ken Broadhurst at 09:13