A black cat for Halloween

For my Halloween post, here's a black cat. It's Bertie, of course. About 10 days ago, we had our annual "cumbersome objects" garbage pickup. That's objets encombrants. Every fall, a truck comes around on the scheduled day to take away anything you want to get rid of but that's too big to fit easily into your car for a trip to the déchetterie — the recycling center. 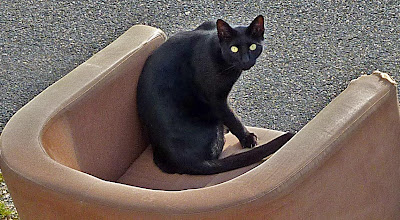 Bertie the Black Cat
This year we finally got rid of an old armchair that we bought when we first arrived here in Saint-Aignan eight years ago. The upholstery was coming apart and was stained. We also got rid of an enormous old CRT television set that we hadn't used in a year or two, since we got a flat panel TV to replace it. And we got rid of the old lawn mower that gave out last spring, and an antique wheelbarrow for which we never were able to find a new wheel and tire. 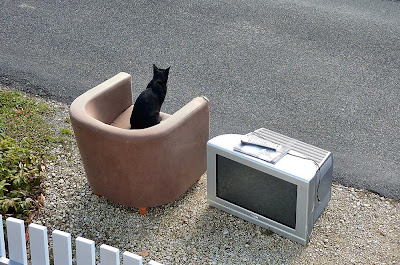 Bertie perched in an old armchair on the side of the road,
just watching the world go by
Usually, if you put things out a day before the scheduled pickup, scavengers will arrive in big cars and little trucks to take away anything that looks useful or strikes their fancy. I really hoped somebody would come get the TV set, which worked fine, and even the chair, which could have been repaired by somebody with the necessary skills (not me). The lawnmower too, for that matter. 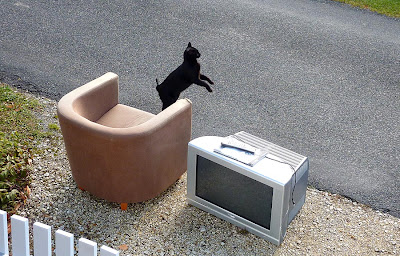 Walt was in the right place at the right time when Bertie saw
a bird fly by right under his nose and jumped up
to try to catch it. The bird escaped indemne.
Problem was, it was raining the day before the pickup, and it didn't make sense to put things out in the rain. They would really get ruined then. The only thing we put out ahead of time was the old wheelbarrow, and sure enough, it was gone in an hour's time, scooped up by somebody who thought it might be useful or found it esthetically pleasing (it was painted in nice colors). 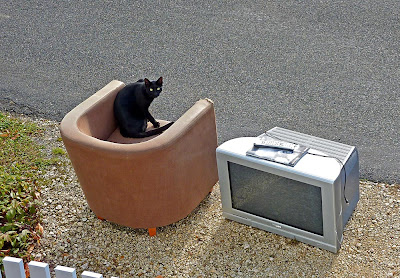 A little later, I leaned out the kitchen window
with the camera and called Bertie's name.
The next morning, we got the TV set — it must have weighed 100 pounds — loaded onto a hand truck and rolled it out of the garage to put it on the street outside our front gate. I also got the armchair down two flights of stairs and set it out there. Walt went and got the obsolete lawn mower out of the garden shed and added it to the pile. 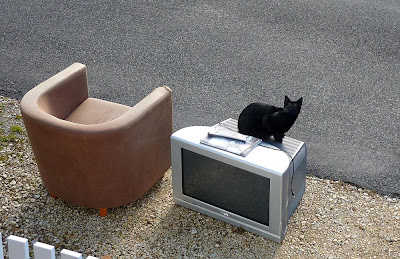 When Bert got tired of the chair, he thought he'd try
sitting on the TV set for a few minutes.
The "junk" sat there all day, and the garbage truck never came. Nobody else came by to collect the stuff either. We had even set the remote control and the manual out on top of the TV set, hoping somebody we get it and be able to use it. No takers. The stuff stayed out there for 24 hours. Then the truck showed up and hauled it all off. The workers dragged the big old TV across the pavement by its power cord, ending any hopes of mine that it might give further service to somebody. I offered it to several people, but nobody wanted it. 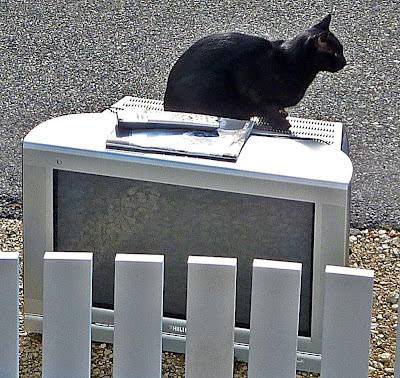 Bertie on TV
But at least one creature got some final use out of all of it. Bertie found the chair that first morning and perched in it for a while during the day. When he got tired of that, he sat up on the TV for a while. Walt noticed him out there and took a couple of pictures, including the one of the cat lunging to try to catch a bird that happened to fly by. He missed. After a while, Bertie the Black Cat moved on, going out to do his usual exploring and hunting around the neighborhood... probably bothering the neighbors.
Posted by Ken Broadhurst at 06:35