One morning while we were in Bouzy, Jean-Luc Guillemette offered to give us a guided tour of the cave under his parents' house, where they used to make and now still store their own champagne. In French, « une cave » is a man-made underground structure, not a natural feature. This one, specifically, is a cave à vin — a wine cellar. 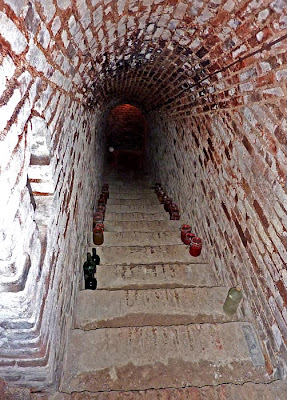 The steps leading down into the Guillemette wine cellar
The natural geological feature that we call "a cave" is called
« une caverne » in French — "cavemen" are « les homme des cavernes ». Another word for cave is « une grotte » — those are what you see down in the Dordogne area or in the Pyrenees at Lourdes. They are not to be confused with « caves » in French — pronounced [kahv] — which are often storage rooms under houses. Une cave, by extension, is also a wine shop. 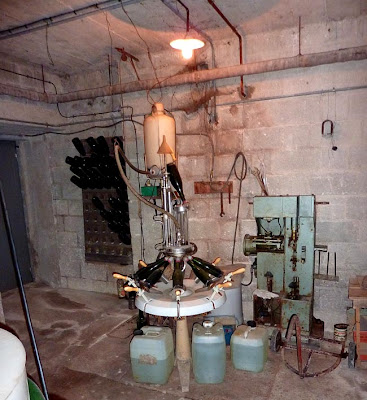 Some old bottling equipment that doesn't get used much any more
The Guillemettes' cave was excavated and bricked in only about 20 years ago, Jean-Luc told us. His father had it dug and did a lot of the work itself. The vein of chalk under their house is crumbly, he told us, so it was better to build brick walls rather than leave the natural chalk walls and ceilings exposed after the excavation. 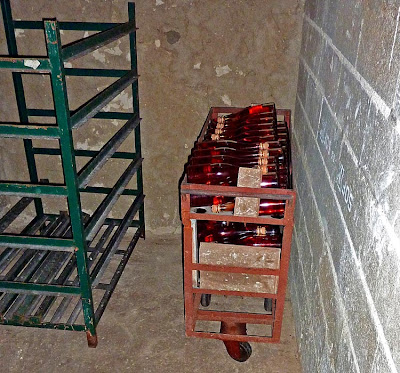 Bottles of sparkling rosé wine stored down in the cellar
The Guillemette house was built in 1691. It's hard to imagine doing such extensive excavations under such an old building, but the Guillemettes did it. The house we lived in back in San Francisco had had similar excavation done underneath it back in the 1970s, but not to build a wine cellar — the purpose of the digging was to put in a big family room under the house, which had been built on the side of a steep hill 10 years earlier. 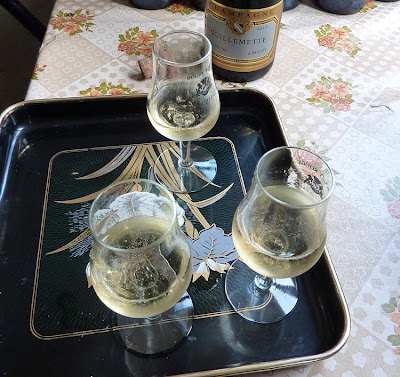 The tasting — the Guillemettes' champagne sells for 13 euros a bottle.
The cave under the Guillemette family home is nine meters deep. That's about 30 feet, and the stair leading down into the cellar has about 50 steps. The brickwork in impressive. There are electrical wires strung all along the walls and vaulted ceilings to power light fixtures. And there's a freight elevator, but Jean-Luc said it was out of order for the time being.

I'm not sure when they stopped, but Jean-Luc and his father Pierre no longer actually make champagne down in the cellar. Instead, they haul the grapes to a local wine cooperative, where the wine is made and processed into bubbly by the méthode champenoise. Then the corked bottles are stored down in the cellar deep under the Guillemettes' house. 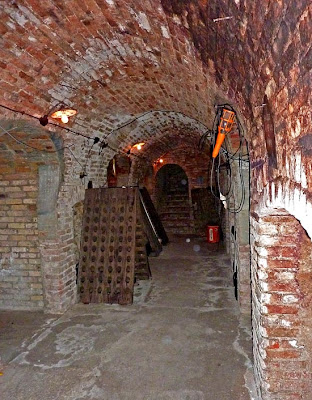 The cellar floor is nine meters below the surface.
In his World Atlas of Wine (1994 edition), Hugh Johnson explains that there are about 68,000 acres of land planted in grapes in Champagne, with 19,000 proprietors. Most landowners hold very small parcels of vines — say two or three acres — and the gigantic, well-known champagne houses like Moët & Chandon own only about 10% of the vines in the Champagne district. The Guillemettes have about 2½ acres of vines. 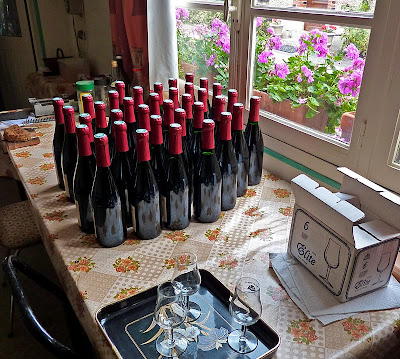 Bottles of Bouzy Rouge just labeled and capped
Jean-Luc said that his annual production is about 3,000 bottles of champagne, both white and rosé — more or less depending on the year and weather conditions. The Guillemettes also produce a certain quantity of the local light red wine from Pinot Noir grapes known as Bouzy Rouge.

Small producers in Champagne often organize themselves to form cooperatives rather than invest individually in all the equipment they would need to produce their own sparkling wines down in their cellars or out in their barns. Some of course sell their grapes to the big champagne companies of the region, and while most of the big companies own vineyards, there are some that don't own any at all.
Posted by Ken Broadhurst at 07:38