We've had a houseguest, an old friend, for the past three weeks, and we've been busy. We went and spent a few days in Champagne, which involved renting a car larger than the little Peugeot that would hold three of us, the dog, luggage, sheets, towels, and coolers. Oh, and that would be spacious enough to allow us to bring some champagne home with us.

Yesterday we drove over to Vouvray — a sparkling wine to rival Champagne's is made there — which we consider to be our old stomping grounds in a way, since we all stayed in a gîte over there more than 10 years ago, on vacation. Without that experience, we probably wouldn't be living in Saint-Aignan now. Vouvray is about an hour's drive from here, just outside the city of Tours.

The vineyard workers' vehicles parked
by the side of the gravel road
Meanwhile, the garden and the vineyard won't wait. Not that we have anything to do with vineyard maintenance except to watch the work crews go about their autumnal business and yell Bonjour ! when we see them, which is nearly every day right now. All the grapes have been picked for a while now, and the current task seems to be the removal of the stumps of vines that have died over the course of the growing season. 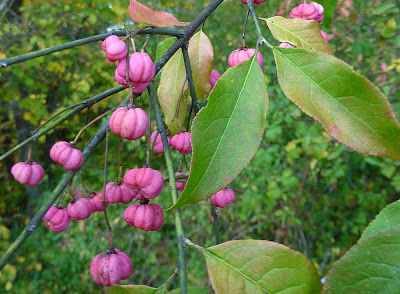 I'm not sure what this is but it's a pretty tree
on the edge of the vineyard.
In the garden and yard, leaves and trimmings are the biggest concern for us right now. I spent a morning raking up leaves both out front and out back last week, and then carting them to different spots where they are needed or just where they can decompose over the winter, out of sight. That kind of work isn't a lot of fun but there is a sense of accomplishment when it's finished. 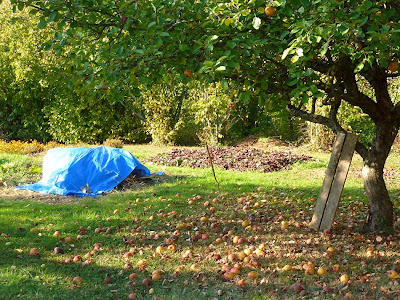 A burn pile covered with a tarp and a garden plot covered with
maple leaves for the winter — and of course
a lot of apples on the ground
We got nearly an inch of rainfall yesterday, and that was the first real rain we'd had in October. September was dry too, and on television people have started talking about sécheresse — drought — again. We had a week of gray skies but then the sun came as as the weather front approached. Now it's supposed to be sunny again for a few days, so I'll be able to get some more work done. There are of course a lot of apples to rake up. 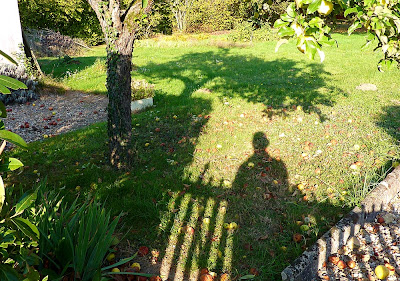 Here I am out by the back gate in the afternoon sun
I'm looking forward to winter, in a strange way. The garden will be sufficiently cleaned up, the potted plants will be brought inside for the season, and the focus will turn to indoor tasks and activities. I have plans and projects. Some have to do with food and cooking — I look forward to stews and soups and other stick-to-the-ribs dinners. 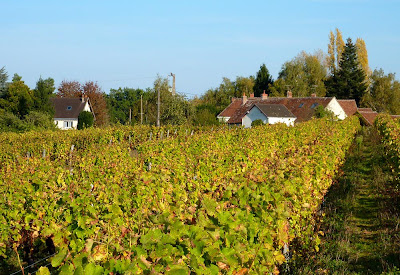 Our house and the neighbors' seen
from the Renaudière vineyard
We are used to winter beginning at La Toussaint here in France, and that holiday, like Halloween, falls at the very end of October. Usually rains move in then, and the weather turns cold. This year, the cold may have come a little early. The weather widget on my computer desktop says the temperature in Saint-Aignan is –2ºC — below freezing.
Posted by Ken Broadhurst at 07:30