One thing that took some getting used to when we were in Bouzy, a village in Champagne, was "living" next to a church. Churches make a lot of noise. The bells ring every 15 minutes, from 7:00 a.m. until 10:00 p.m.

The church bells in Bouzy were loud. The ringing always started with three tones repeated at least once, maybe twice. Ding, daing, dong... ding, daing, dong — "three blind mice... three blind mice." That's what it sounded like to me. Then, on the hour, the bells rang out the time. At seven, that was seven loud rings. At 10, that was 10 loud rings. (Okay, we get the idea.) 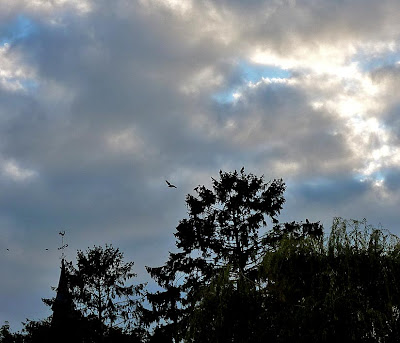 The church steeple and the jackdaws we could see and hear in Bouzy
But it wasn't just the loud bell-ringing. It was also the jackdaws. They're called choucas in French. They squawk and chatter. They live around steeples and towers and another name for them is corneilles des clochers — belltower crows. The jackdaw is a Eurasian crow, and one of the smallest birds in the crow family. Maybe one of the loudest too.

Jackdaws are gregarious, meaning that there can be big flocks of them. That's what it was like in Bouzy. They swirled and swooped all around the church steeple, not really blocking out the sun but certainly weighing down the branches of the big conifers between our rental house and the church. At the slightest noise, the flock would take flight, chattering and squawking, swooping and whooping.