On our way back from Champagne, there were two stops I wanted to make — or maybe three. One was the village of Chaource, to buy some cheese. We did that, leaving the autoroute at Troyes and driving south on little roads. The second stop was Chablis, and we made it there in time for lunch. A bonus was the picturesque, bustling town called Tonnerre — it's about halfway between Chaource and Chablis, and we drove right through the middle of it. I'd like to go back there one day.

I had been to Chablis twice before. This past June, CHM and I drove through the town on our tour of northeastern France, and I wrote about it here. My previous visit to Chablis had been with Walt in June 1993 — we were driving from Paris to Provence, and the first day we stopped and had a picnic lunch on a bench beside the river (or maybe it's a canal) with a view of the vineyards climbing the hills on the other side. It is a very nice memory. 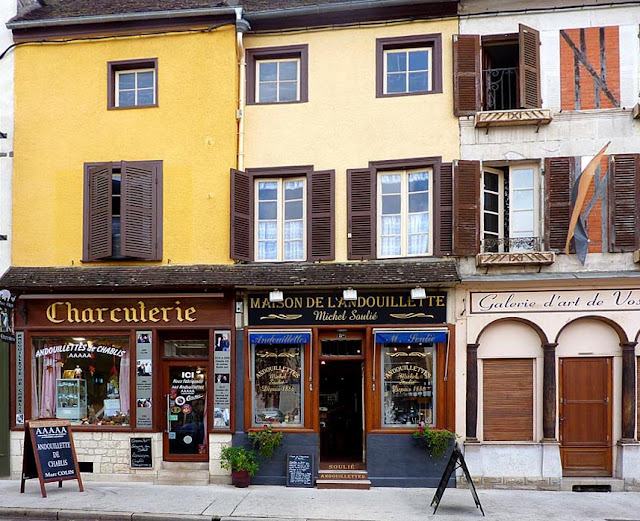 In Chablis, two shops, side by side, specializing in
the chitterling sausages called andouillettes.
This time, I wanted to buy some more bottles of Chablis wine and just see the town again. I wanted to walk around in the streets a little, weather allowing. I love going to towns and regions that I've always heard of and finally seeing what they actually look like. Since I've been studying, learning, and teaching French since the age of 14, I've heard of a lot of places but been to many fewer. A lot of the names that call out to me are places where wines, cheeses, or other food products are made or grown. Or where great events in history occurred. 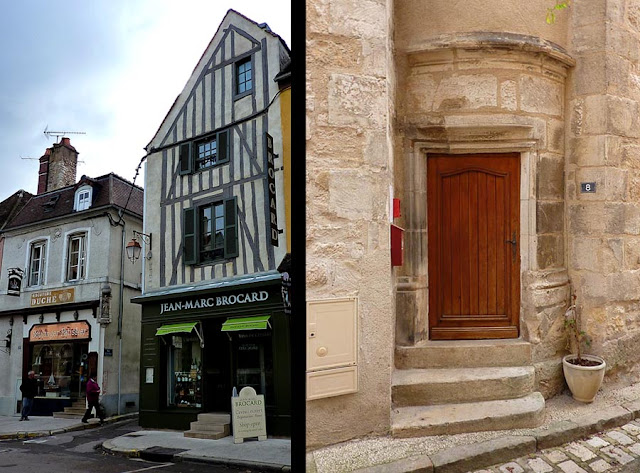 Shops in nice old buildings on the main street, and
a beautiful door in a turret on a back street in Chablis
So it was appropriate that we arrived in Chablis in time for lunch. It was almost exactly two weeks ago, and the sun came out while we were there. I was able to take some pictures. I bought a couple of bottles of Chablis wine in a little grocery store. We looked at the menus posted outside several restaurants in the middle of town, and finally decided on a medium-priced one that seemed to have a wide choice of dishes we could all three enjoy. 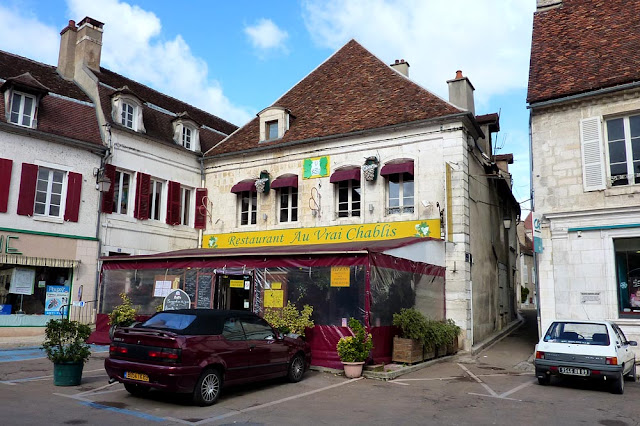 Here's the restaurant. It wasn't fancy but the food was good.
The restaurant, Au Vrai Chablis, was not at all fancy. But what it lacked in décor, it made up for in good food and wine. We of course wanted to drink some Chablis wine. The menu Walt and I chose included poached fish as a main course, and that was perfect with the dry, crisp local Chardonnay. My first course was a feuilleté farci aux porc et champignons — a puff pastry shell with a pork and mushroom stuffing — with a tossed salad. 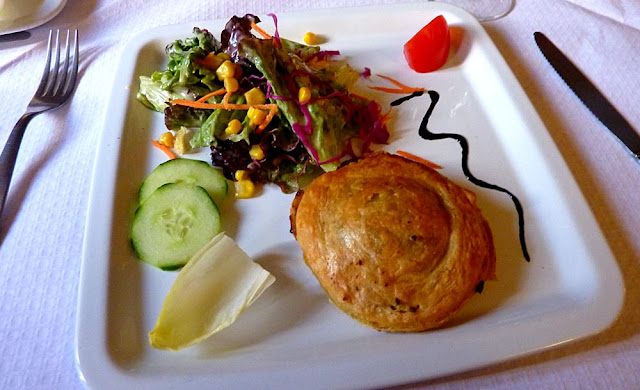 My lunch started with a feuilleté farci... 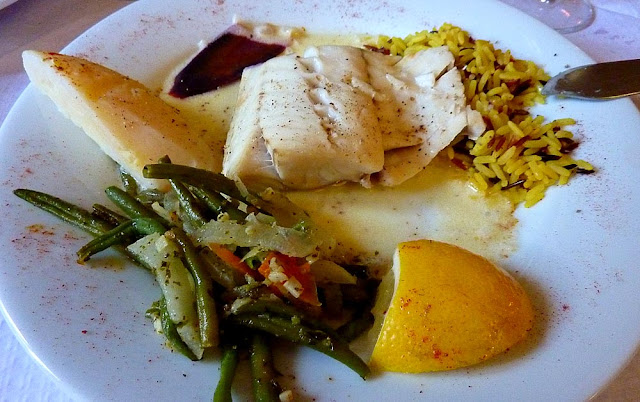 ...followed by poached fish with vegetables and rice.
The restaurant was not crowded — or at least the room we were in was not crowded. In fact, the only other diners in the room with us were a French couple who arrived after we did, ordered, ate, and left before we had finished our meal. In the room next to the one where we sat, there was some kind of celebration going on. There must have been 10 or 15 people in there, and they were drinking champagne. The scene made for good people-watching. 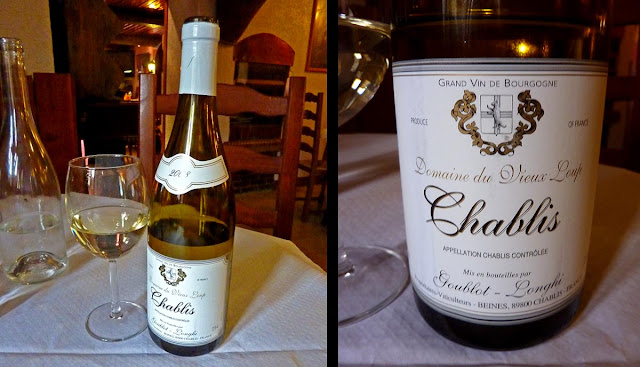 The Chablis wine we had at the restaurant — chablis
is made exclusively with Chardonnay grapes.
We felt very lucky to have found Au Vrai Chablis, because the food was so good and the atmosphere was so informal and convivial. The two women who waited on us were talkative and easy-going. And the price wasn't bad. For three of us, with a nice bottle of Chablis plus coffees and more, the meal came to less than 80 euros — about 25 euros per person for three courses, wine and coffee included. 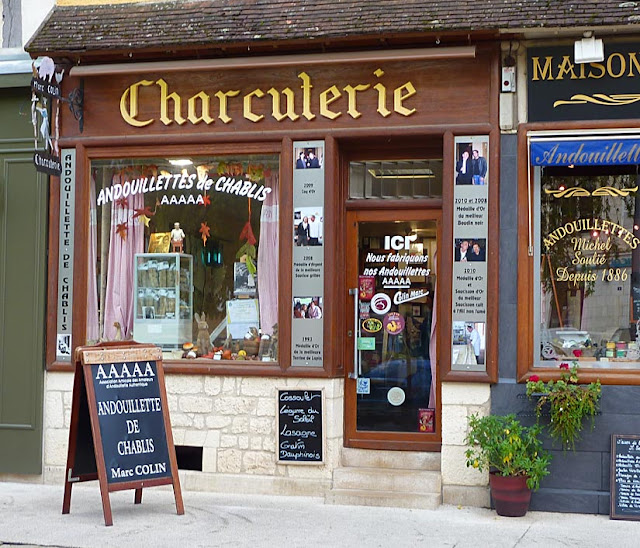 One last chance to buy some good andouillettes de Chablis...
The other place I wanted to visit that day was the town of Sancerre, which is on the Loire River about halfway between Chablis and Saint-Aignan. It's a hilltop town that's famous, especially, for Sauvignon Blanc wines. I wanted to buy a few bottles but was we left Chablis, driving through Auxerre, it started raining. If we couldn't walk around in Sancerre and see the views from the top of the town, it wasn't worth going there. So we didn't. I will get back there one day. The last time I went to Sancerre was 11 years ago — and it's only about 70 miles from Saint-Aignan.
Posted by Ken Broadhurst at 07:50