Driving over to Vouvray

Everything was going along just fine until the car conked out near Amboise. Even that didn't put a damper on the trip. The weather was beautiful, considering it was getting to be late October. The countryside was beautiful too, green and manicured, against a backdrop of blue skies with interesting cloud formations. 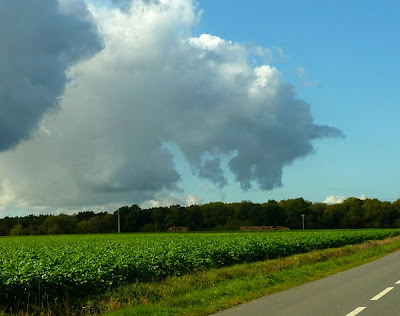 What does this cloud look like to you?
I told Cheryl that we wouldn't worry about the car, since we didn't really have a schedule for the afternoon. I would just call the insurance company's roadside assistance number and get us a rental car if the Peugeot really gave up the ghost. Of course I'd have to find a phone booth, but it wasn't raining or cold. 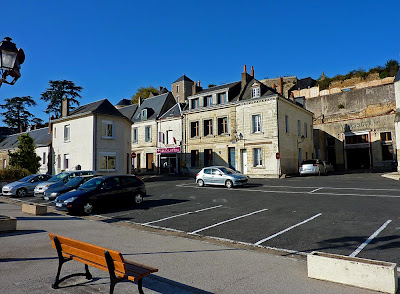 That's my little Peugeot sitting out there by itself
in the middle of the main square in Vouvray.
The car stalled out one more time as we got to Vouvray, if I remember. But it started up again, and the check engine light actually went dark. That seemed like a good sign. Going to Vouvray is always fun, and nothing could change that. In June 2001, Walt and I had rented a gîte over there for a two-week vacation. Cheryl came and spent the first week with us, and CHM came and spent the second week. We had a lot of fun and saw a lot of sights. 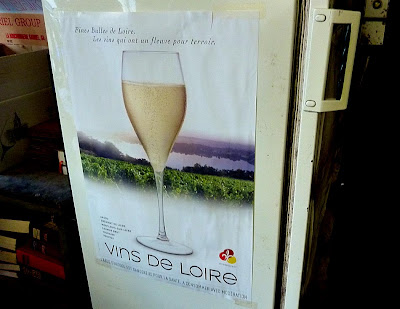 Vouvray is known for its white wines — dry, sweet, or bubbly.
Thinking back on it, we had car trouble that year too. We had rented a Renault Mégane at CDG airport and driven on down to the Loire Valley. The weather was sunny and actually hot. That was good except for one thing — the air-conditioning in the Mégane was on the blink. It was blowing hot air, which wasn't helpful or comfortable. 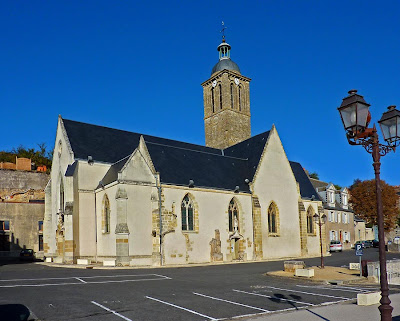 The church in Vouvray...
It was Saturday and I started calling local rental agencies — I think it was Avis we rented from that year — on Sunday morning. I called two in Tours and one in Blois to ask if I could bring the car in and exchange it for another. No, I was told, we don't have any cars to replace it with. And that seemed to be that. 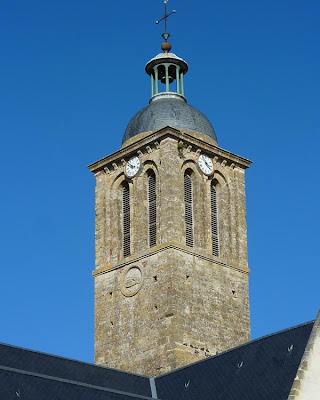 ...and a closeup of the tower
I called them all again on Monday morning, if I remember correctly, only to be told the same thing. There were no cars available for the exchange. Then it dawned on me that I was asking the wrong question, and nobody was volunteering any information or help beyond giving me a short, straightforward response to my enquiry. 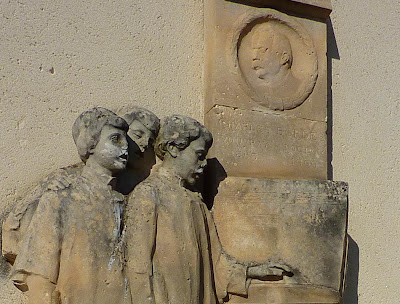 At the church in Vouvray
So that afternoon I made another call to the closest Avis agency, over in Tours-Nord. I have an Avis car that I rented at the airport on Saturday morning, and the climatisation is en dérangement, I told the person on the phone. If I bring it in tomorrow morning, would you have a car with working AC that I could exchange it for? « Oui, bien sûr, Monsieur. Venez nous voir vers onze heures et nous ferons l'échange. » It was magic! The agency obviously needed some lead time. They didn't like to be pushed, I guess. Most importantly, in France you have to ask the right question. 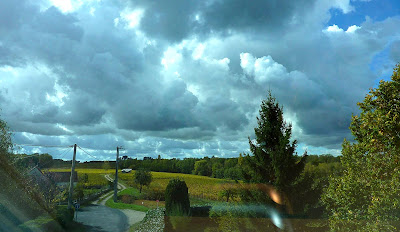 Compare these recent skies to the ones in the Vouvray photos above.
Cheryl and I went to pick up the new car the next day (Walt was watching the French Open tennis tournament on TV). It turned out to be a gigantic silver Renault Espace van — it seemed to be twice the size of the Mégane. We ended up calling it the Magic Bus and really enjoyed driving it all around the countryside. I even ended up driving it around the streets of Paris the next weekend, and was able to park it. The AC worked great and it was a lot of fun. 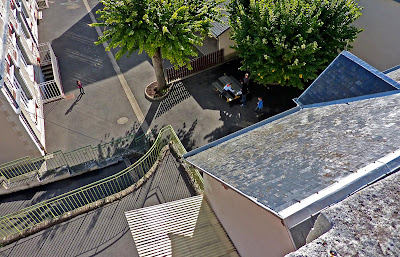 Looking down into the schoolyard at Vouvray
Those were the good old days, I guess, back when we were still "young" and prosperous. And when we could take carefree vacations. Good memories.
Posted by Ken Broadhurst at 09:44