Pictures from Mareuil-sur-Aÿ in Champagne

A couple of weeks ago in Champagne, we spent an afternoon poking around in the village called Mareuil-sur-Aÿ. It was a place I discovered by accident back in June, when I was driving through the region from Epernay toward Châlons-en-Champagne with CHM.

The name struck me because here in Touraine we live very close to the village called Mareuil-sur-Cher, just a few miles west of Saint-Aignan. I've done a little reading, and there appear to be 19 villages in France named Mareuil. Four of them are in Champagne. Mareuil derives from an old Gaulois (Celtic) word meaning "a large clearing (in a forest)" — somehow, the term survived a few centuries of Roman rule and a long millenium during which the French language gradually came into existence. The modern French term for "a clearing" is « une clairière ». 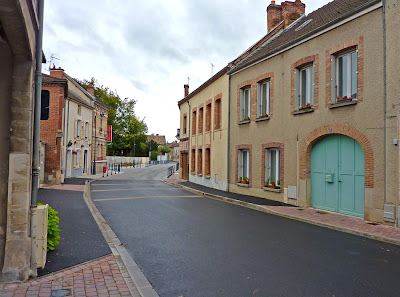 The main street through Mareuil-sur-Aÿ, in Champagne
Mareuil-sur-Aÿ — the umlaut on the Y means you pronounce the word as two syllables, [ah-ee] — is one of the prettiest villages along the Marne River, east of Epernay and on the south side of the Montagne de Reims. Oh, and Mareuil is pronounced more or less as [mah-RUH-yuh], with the middle syllable getting the tonic stress. 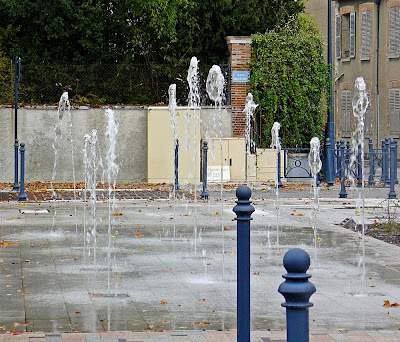 The fountain on the main square in Mareuil-sur-Aÿ
Thanks to Cheryl for the photo
In that Mareuil, there's a pretty little square right on the river/canal (the two are one at that point), with a fancy fountain like one I've seen in Paris at the Parc André-Citroën — the water squirts up out of a pattern of holes in a stone plaza, dancing in some rhythm so that some columns of water are higher than other, alternately. 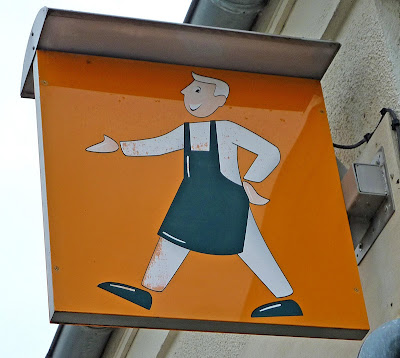 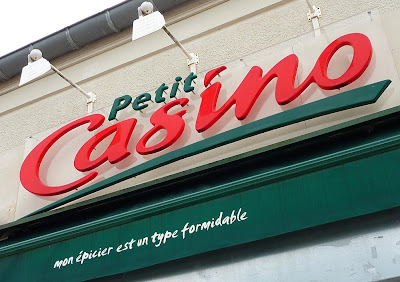 "My grocer is a great guy" is what the sign says. If you look
closely, you'll see that his head, hands, and feet
are not attached to his body.
On the river/canal are pleasure and tour boats. Along its banks are a big park with tall trees planted in symmetrical rows and the entrance to a campground where people sleep in the little trailers called caravanes. There's a grocery store and a café/bar, pictured here. 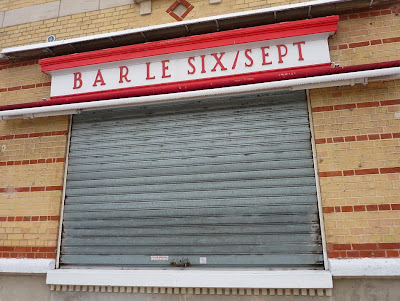 The café/bar was closed for the day.
We of course tasted and bought some champagne in Mareuil. First we stopped in at the Billecart-Salmon winery, which we had heard of. We went up a big stone staircase to a glass-fronted office where a well-dressed woman was sitting in front of her computer, with her back to us. We stood for a minute, waiting for her to notice us. When she did, she came out and asked how she could help us. I said we'd like to do a tasting — une dégustation — but she said that wouldn't be possible. Tastings were by appointment only, and we didn't have an appointment. The place felt very snooty.

Then we drove down the street to Guy Charbaut's wine house, where I had stopped last June. We went in and a woman came out of a much less fancy office to greet us. We asked if we could taste and buy some wine, and she said Oui, bien sûr. She took us across a courtyard to a big banquet room that was fairly rustic or down-home in style. She poured us tastes of three or four wines, and we bought more than a dozen bottles. 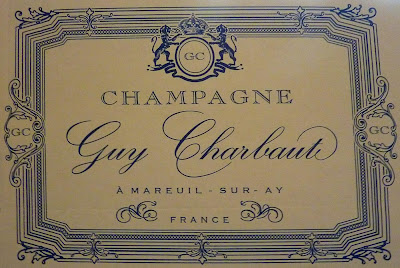 We like the Charbaut champagnes a lot.
The woman turned out to be the recently deceased Guy Charbaut's daughter-in-law. She and the younger Monsieur Charbaut, her husband, now run the business. It was nice of her to take as much time as she did to talk to us about the wines and pour the tastes. She told us that she and her husband had been to New York 12 or 13 years ago and had dinner in the Windows on the World restaurant on top of the World Trade Center. So we talked about September 11, 2001, for a few minutes. Madame Charbaut was down-to-earth and charming.