About the Bouzy gîte

I shouldn't be too negative about the gîte we rented in Bouzy. It's hard not to be negative, however, when you're told in writing that the rental house has wifi for Internet access, only to be told in person that there's no Internet access there and there never has been. 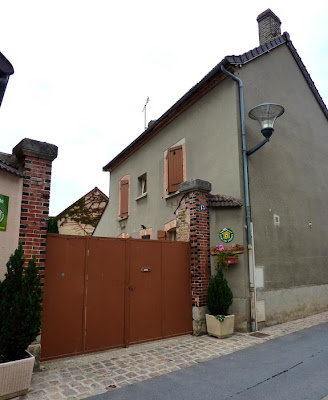 The rental house from the street side
Madame G, the owner, said she couldn't understand why Gîtes de France made the claim that the house had Internet access in the first place. She washed her hands of any responsibility. The Gîtes de France organization in the Marne département sent me an evaluation form to fill out after our stay, and I'm definitely going to send it in. 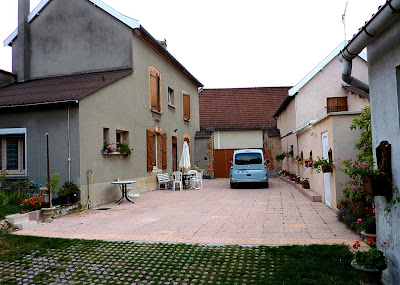 The house from the courtyard side
It's amazing how people who aren't on the 'net perceive the whole thing. When Madame G. said what she did about there being no Internet, I told her I was disappointed. I might not have rented the gîte if I had known beforehand that we'd be cut off. Her reaction: Well, now you'll be on a real vacation for a few days. I guess she didn't understand that we are all three retired, and that we don't use the Internet as a work tool. 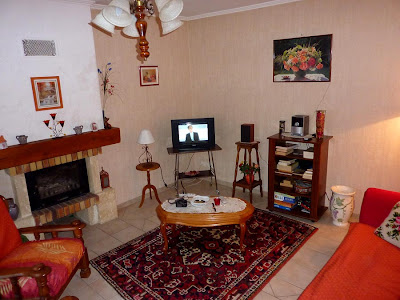 Living room with TV and radio
The day we arrived, Madame G left to go on what she called "a pilgimage." She said she was going to the Pyrenees, so I assume her destination was Lourdes. We never saw her again after that first afternoon. We did see her husband and her son, and they were helpful and accommodating.

The house in Bouzy was not nearly as well equipped with kitchen implements, serving platters, glasses, and dishes as the one in the Perche was back in August. The furniture was flimsier in all the rooms. The shower was not nearly as nice and spacious. And there was only one full bathroom, compared to two in the other house. 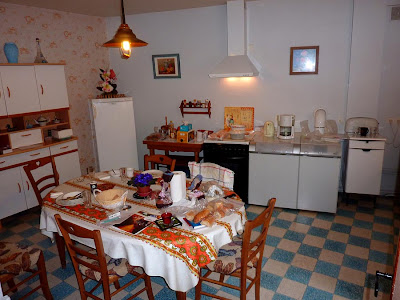 La cuisine — the control knobs on the stove had been scrubbed clean
of all markings, so it was impossible to know the temperature of the oven.
The setting was completely different. In the Perche, we were way out in the country. In Bouzy, we could walk around the town and buy bread and champagne. Unfortunately, the grocery store in Bouzy was temporarily closed for remodeling. There was a supermarket in the town of Tours-sur-Marne, seven or eight miles away. If there was an open-air market in Bouzy, we didn't find out about it. 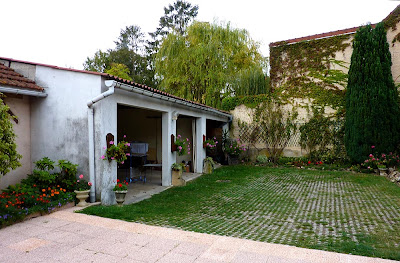 The back end of the courtyard, with garages
Bouzy is not really what I could call a picturesque or charming village. It's a working town, with trucks and tractors rumbling through the narrow streets all day. There's very little greenery in the town. The sounds you hear are loud motors, and of course bottles rattling in big metal crates as they are trucked in to be filled with bubbly wine and then trucked back out. 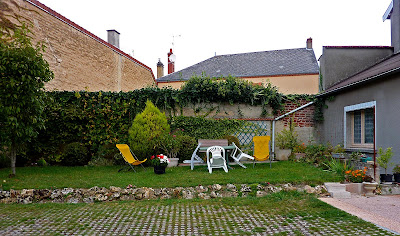 In October we didn't have the kind of weather that would have
made sitting out in the garden for long periods of time pleasant and relaxing.
It's surprising how agricultural, rural, and working class a town like Bouzy, where some of the most prestigious champagnes are made, can feel. Moët & Chandon, Heidsieck, Mumm, and other big houses have facilities there — they are all warehouses and pressoirs for extracting the juice of grapes grown on the surrounding land. I saw Georges Vesselle, who owns the champagne house closest to Madame G's and sells bottles for high prices in Japan and all over the world, driving down the street on a forklift one morning.

The house we stayed in was over-decorated in a chintzy style. I guess there's no accounting for taste. There were so many artificial flowers and plants inside the house that I had to go outside to check if the flowers in the window boxes and flower beds were actually real. They were. Oh, I should mention the price: 274 euros for four nights, for three people and the dog. Plus a forty euro cleaning fee. For those prices, I guess you can't expect great luxury. Gîtes are really just a step up from camping, but they are also very affordable.