A lot of tartiflette passed down people's gullets in France over the last two weeks. That's because this is winter vacation time, and so many people go spend a week or two in the Alps, whether they actually ski or not. They all eat — that you can be sure of.

And one of the special dishes people eat in the Alps when the weather is cold and snowy is a fairly recent (1980s) concoction called « tartiflette ». It was invented and has been promoted by the people who make the Alpine cheese called Reblochon. Basically, la tartiflette is cheese melted over potatoes. "Potatoes au gratin," we would say — un gratin de pommes de terre in French. 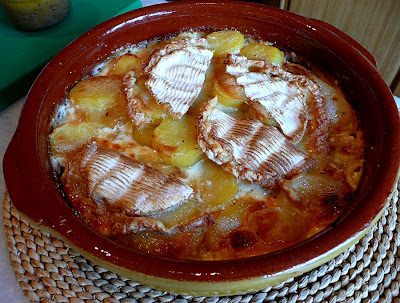 Reblochon is a cow's milk cheese made in the Alps. It's what you're supposed to use to make une tartiflette. But if you don't have any Reblochon, you can of course use other cheeses to make the gratin. In my case, I had an extra Camembert. They were on sale — two for the price of one — a week or two ago, and one of the two I bought was still there in the fridge, unopened. I had finished the first one last week. 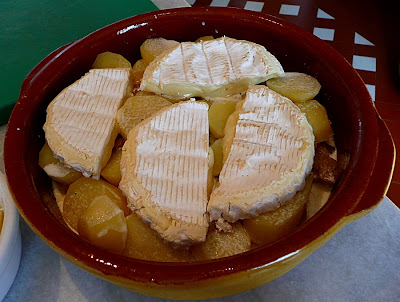 Ready for the oven
In preparation, I used Google to search for Tartiflette au Camembert and of course immediately found a half-dozen recipes. That was confirmation that my idea would work and was worth a try. So I forged ahead. I had just bought a 2.5 kg sack of nice waxy boiling potatoes at Intermarché over in Valençay. 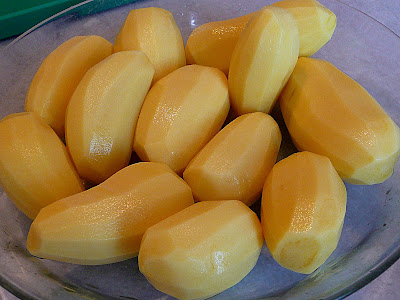 For tartiflette, don't slice the potatoes too thin — you want them to hold together and have a good potato-y texture in the dish. You can dice them if you want to.

The other ingredients are onions (many recipes list them as optional) and pork lardons (also optional). Those are the same ingredients used to make truffade, and I had both on hand. I added a few cloves of garlic. Another ingredient that is listed in most of the recipes I looked at is some good crème fraîche, or heavy cream. This is a pretty rich dish, as you have understood.

The first step in making tartiflette is to "parboil" the sliced potatoes. Parboiling means cooking vegetables in boiling or simmering water — without salt, in the case of potatoes at least — until they are just starting to get tender. For tartiflette, the potato slices or chunks will finish cooking later in a hot oven, and in the mixture of cream and melted cheese.

Meanwhile, lightly sauté some pork lardons — half a pound at most of chunks of ham or bacon, or even turkey or chicken, smoked de préférence — with one large onion, diced, and maybe three chopped garlic cloves, in butter or oil. Meanwhile, cut a Camembert or other cheese into four pieces, as you see in the picture just below. You can remove or not remove as much of the crust of the cheese as you want. I left it on. 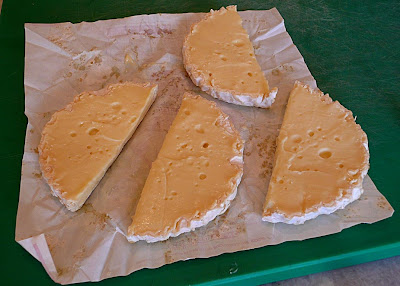 Cut the Camembert in half, and then cut
each half in half through the center.
Drain the parboiled potatoes. Put a few sautéed lardons and onions in the bottom of a baking dish. Lay in enough potato slices over that to cover, and then strew on some more lardons and onions. Lay in a top layer of potatoes.

Pour on about half a cup of cream, seasoned with a little salt and some black pepper. Place the pieces of Camembert cheese over the top, crust facing up. What will happen in the oven is that the soft interior of the cheese will melt and flow down into the potatoes, mingling with the cream. The Camembert crust will stay on top and get brown.

You can eat the cheese crust if you like it, or you can remove it and discard it. I thought that cut into small pieces and eaten with some potatoes, the Camembert crust was pretty tasty.

Because I had only one Camembert and about a kilo (nearly 2½ lbs.) of potatoes, I made a second dish that was exactly the same as the first but for the type of cheese I used: Comté. That's a cheese of the type we call Swiss cheese in the U.S. Because I didn't think the Comté cheese would liquefy the way the Camembert would, I put two layers of it in — one between the two layers of potatoes, and then the cheese layer on the top. 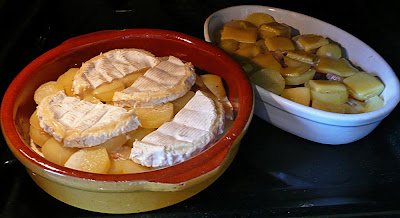 The two gratins de pommes de terre cooking in the oven
Gratins are fairly free-form dishes, when you come right down to it. Some recipes get codified because they are so good — among them, gratin dauphinois (potatoes, milk, garlic), gratin de chou-fleur (cauliflower, cheese, cream), and tartiflette (see above).

But in fact, you can make a gratin with whatever vegetables, meats, and dairy products you think would be good together.
Posted by ckb at 07:53