First, a follow-up to the post about the drawing by CHM's grandfather. CHM says he's pretty sure that the little étude he gave me represents the page (le page, masculine) in the painting called La Remise de l'Etendard that hangs at the château in Blois.

CHM sent me a scan (or photo) of another study of the page boy. Here it is: 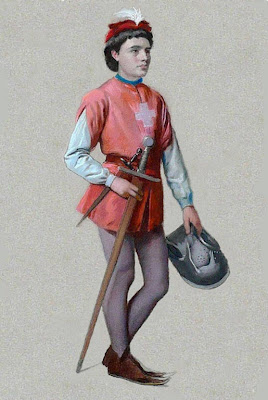 CHM has recently donated this piece to the museum in the city of Péronne, north of Paris.

~ ~ ~ ~
We not only have cyclamens — I looked up the word and most, but not all, dictionaries seem to say the plural of cyclemen is cyclamens — in our yard, but also a lot of primroses (primevères in French). I took pictures of some of them day before yesterday, and here they are: 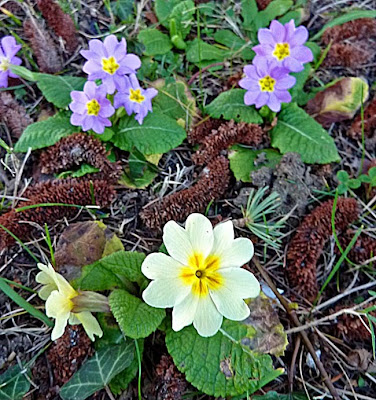 The pictures aren't great — they are un peu floues, not very sharp — and that's why I didn't post them earlier. The primroses are just starting to come up, and there will be a lot more of them out in the yard over the next few weeks. 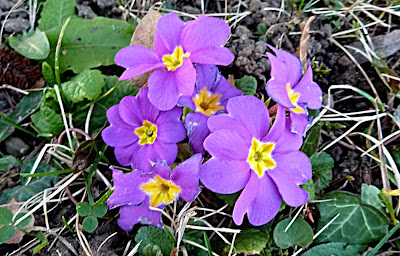 ~ ~ ~ ~
I went and got my hair cut yesterday. The woman who runs the hair salon, le salon de coiffure, in our village is named Madame Barbier. It's not a joke. She is married to Monsieur Barbier. Her name is just a funny coincidence, given her métier.

Now there's another one. At our neighbors' little party a week ago, the discussion turned to firewood. We said we have had trouble finding people who sell firewood and will deliver it to the house. A neighbor told us that she knows two people we can call.

One of them is Monsieur Dubois. In other words, « l'homme qui vend du bois » — the man who sells wood — well, you get it. The next time we need firewood, we'll call Monsieur Dubois. He lives in the village of Orbigny, just a few miles south of us, and we probably won't forget his name. 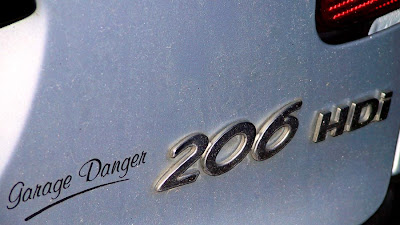 Another person with a funny name here is Monsieur Danger, who owns and operates the Peugeot dealership in Saint-Aignan. It's called the Garage Danger, and it's where I bought my car 7½ years ago.