The crêpes with cornmeal in the batter turned out to be a big success. They were delicious. I can say that objectively, because Walt did all the work. He made the batter and cooked the crêpes, about a dozen of them. We ate them all!

Before I go any further, let me post the recipe. Funny name but great crêpes: 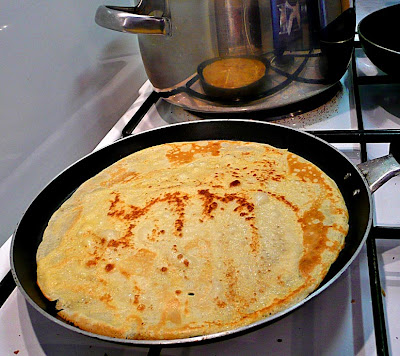 Easy Corn Tortillas (Cornmeal Crêpes)
1 cup* flour
1 cup cornmeal
1 egg
1 tsp. salt
Milk (approx. 2½ cups)
Mix dry ingredients together with a wire whisk,
and then add milk to desired thinness.
The result is a crêpe batter.
Pour a small amount into preheated, buttered or oiled skillet.
Spread thin by tilting pan. (A small pan works best.)
Flip tortilla once when batter loses its glossy look and
the edges of the crêpe look a bit dry and start to curl.
Cook a few seconds longer and tip out of pan.
Yields about 14 tortillas or crêpes.
* Note: a U.S. cup is 8 fluid ounces, or 240 ml.
So 2½ cups = 20 fl. oz. = 1 British pint = 600 ml. 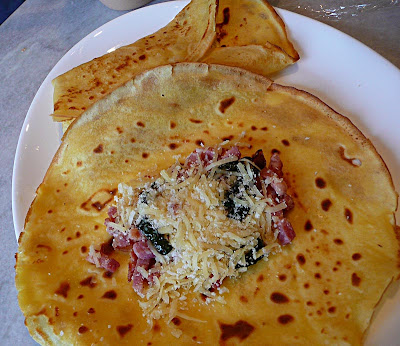 A filling of pork, zucchini, and grated cheese
Walt used about a cup of skim milk, a little less than a cup of liquid cream — the crème liquide we buy comes in containers that hold 200 milliliters — plus enough water to bring it all up to the right quantity. All that because we didn't have any whole milk in the house — that's what you should use, whole milk. If you use polenta rather than cornmeal, make sure it's a fine (not coarse) polenta. The batter should have the consistency of heavy cream. 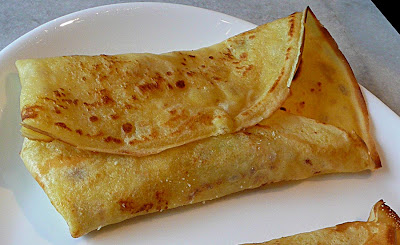 A crêpe folded up around that savory filling
We will make these again soon and use them as tortillas with Mexican food. They really aren't Mexican-style tortillas, which don't have eggs or milk in them, but I think they will be good. In fact, yesterday we each ate two crêpes stuffed with savory ingredients: some cooked zucchini, sautéed pork lardons (plain, not smoked), and some grated French Comté and Italian Parmesan cheese.

Walt cooked all the crêpes and stacked them on a plate. They don't stick together. He used melted butter in the non-stick pan he cooked them in. And once the crêpes were stacked on the plate, he covered them with a thick dishtowel to keep them warm and soft. We didn't want them to dry out get brittle because we planned to fill, fold, and reheat them either in the oven or in the crêpe pan before we ate them. 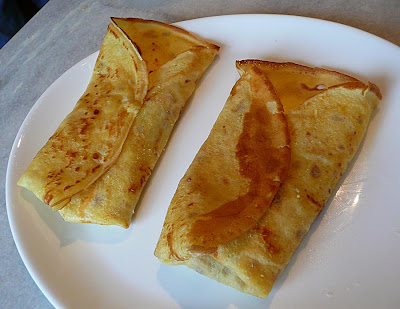 Filled savory corn crêpes or tortillas, ready for the oven
As a main course, we put some of the pork, zucchini, and bacon filling in several crêpes, folded them up, and heated them on an oven-proof plate in the oven. We just needed to melt the cheese, really.

For dessert, we spread some jam on some crêpes, and just sprinkled others with sugar and melted butter. We reheated them and then folded them up in the crêpe pan. The last one I had was one I doused with some Triple Sec (orange-flavored liqueur). That was good. 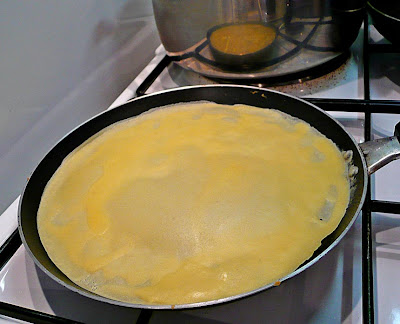 Cooking a cornmeal crêpe
Wow, 27 comments yesterday. I can't answer them all, but I've read and enjoyed them all. Judy, I'm going to the supermarket this morning and I'll have a look around the sugar section to see what different varieties are sold there. What we buy for everyday use in cooking and baking is called sucre (blanc) en poudre. That's just plain, white, granulated sugar.

BettyAnn, I believe that that bag of white cornmeal from Abbitt's Mill in North Carolina is one I brought back the last time I went to the States. The ones you brought in 2008 (I was so grateful) got used up a while back. Now I can get fine-ground yellow cornmeal here and I keep a supply in the freezer. So I only bring back the white meal nowadays.

CHM, I'm glad you are not superstitious. Who needs all that bad luck? Sue, grits are just corn mush, like polenta. Grits are normally white, while polenta is yellow. I'll write more about grits one day soon. I think I still have some grits that I brought back from North Carolina last year.
Posted by ckb at 09:02