I didn't really end up cooking the New Zealand leg of lamb the way I thought I would. My initial idea was to cook it as I would cook an expensive French leg of lamb — basically plain, with maybe a light sprinkling of dried thyme, salt, and black pepper over it, and several cloves of garlic in the roasting pan to give it some of their flavor.

Instead, in looking around at all kinds of recipes and methods for cooking leg of lamb, I found a couple of recipes for marinades that sounded good. I had all the ingredients on hand, and I also decided that giving the lamb some smokiness would be good. There was plenty of smoked paprika in the spice cabinet, and some liquid smoke too, so I put those in the marinade with olive oil, garlic, lemon juice, and mustard, among other ingredients. 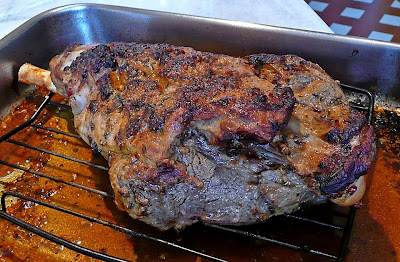 The roasted 4 lb. gigot d'agneau
We decided to cook the lamb at a high temperature, at least to start. And to keep the juices and stray marinade from burning in the bottom of the roasting pan, we poured in a cup or so of water at the beginning and kept adding a little water as the lamb cooked. We ended up with a nice sauce. 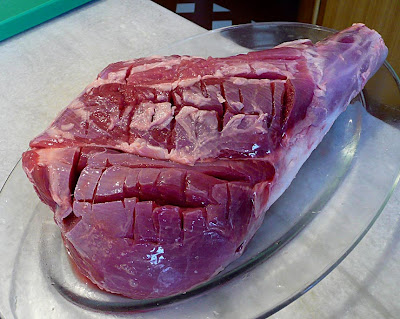 Score the meat pretty deeply so that the marinade can soak in.
Walt kept an eye on the lamb, turning the oven temperature down as it cooked so that it wouldn't burn on top. And toward the end, he covered it with a sheet of foil. When the internal temperature of the thickest piece of meat reached 135ºF, or about 60ºC — which was after about an hour of cooking — we turned off the oven, opened the door slightly, and just let the roast sit there under its foil for about half an hour, to rest. 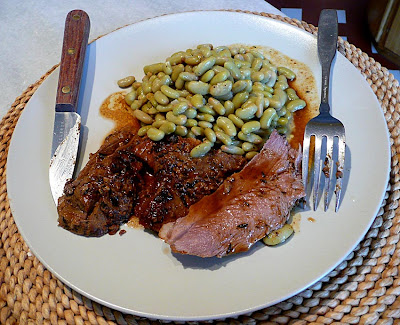 A simple but satisfying meal, with bread and wine of course
Resting lets the heat distribute itself inside the meat and even out the cooking, so that the roast is not burned on the outside and raw on the inside . Here's the recipe for the marinade and a description of the cooking method: 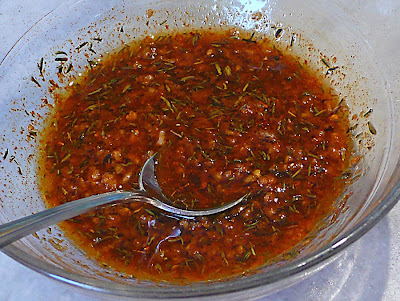 Mix all the marinade ingredients together well.

Trim off the roast as much fat and silver skin as you want.
Score the meat with a sharp knife so that marinade can penetrate. 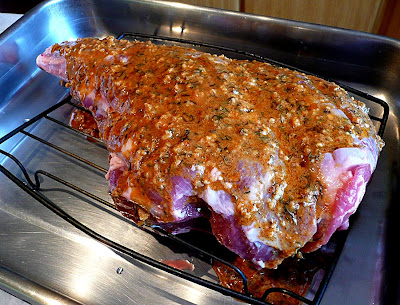 Spoon on the marinade.

Let the roast marinate in the fridge for an hour or two,
or cook it immediately on a rack in a 450ºF/230ºC oven.
Pour a little water and/or white wine in the bottom of the pan
to keep it from burning. Cook for 15 minutes per pound of meat,
until the internal temperature of the meat reaches at least
125ºF/52ºC for rare, or at most 140ºF/60ºC for medium. 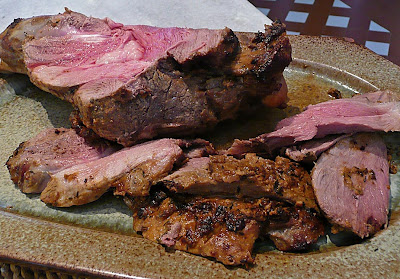 Fairly rare — a little redder than rosé, I think

Then let the roast rest for 20 to 30 minutes so that the
residual heat will penetrate intto the center of the meat,
making it evenly done. The temperature
inside the meat will continue to rise as it rests.
(Medium rare is called rosé in French.) 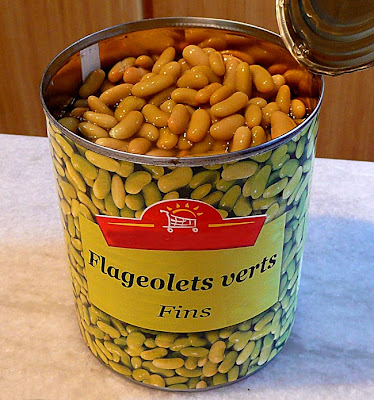 Store-brand beans — excellent
All we ate for lunch was some slices of roast lamb and a serving of the pale green French flageolet beans. To cook the beans, I followed the instructions on the can: heat them up slowly in their liquid, either in a saucepan or in the microwave oven. Then drain them and add a lump of butter and some seasonings. 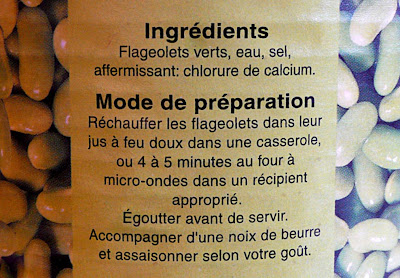 Follow the directions (more or less)
Well, I didn't do exactly that. I chopped up two cloves of garlic and cooked it on low temperature in the microwave in butter for 10 minutes. It didn't color at all, but it cooked and flavored the butter. Then, when the beans were heated up, I drained them and put them in the bowl with the garlic and butter and tossed them around with some salt and pepper. They were delicious. 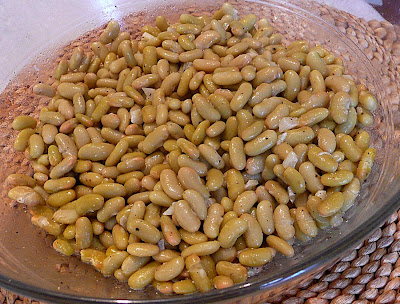 Nice garlicky beans
One of the ways I had considered cooking the leg of lamb was what the French cookbooks call « à l'anglaise » — English style — which means boiling it in a large kettle of water with some aromatic vegetables. You can cook it that way until it's just rare, medium rare, or well done, just as you can cook it in the oven.

I think I'll try that next time, since I've never cooked lamb that way before. For the time being, we have lots of leftovers.
Posted by Ken Broadhurst at 08:00