In which I declare it over

I've gone from having no outdoor photos to post, for what felt like a couple of months there, to now having so many I don't know what to do with them all. In other words, winter is over. I boldly declare it over. I know, I'm tempting fate. We may end up having a snowy March.

However, even if cold weather comes back, the hours of daylight are so long already, nearly two months after the winter solstice, that I think we won't feel plunged back into darkness. The sky can't go dull gray on us again, for weeks on end. Can it? 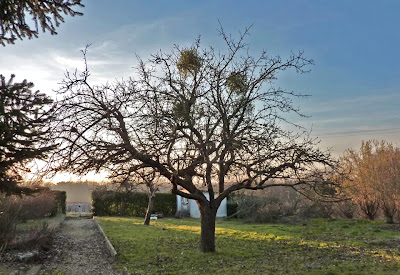 Afternoon sun highlights balls of mistletoe in an apple tree.
I was at the pharmacy the other day. There's a woman who works there who always inquires about our health and happiness. She's married to a Scotsman, so she understands what it's like to be a stranger in a strange land. I told her we've been trying not to get too bored and down in the mouth, despite the weather.

Yes, she said, it's been awful this winter, and it started early. November was damp and dark, and then December was frigid and dark. Everybody felt like we had had our two months of winter by the time 2011 rolled around, and then we still had January, February, and March to get through. 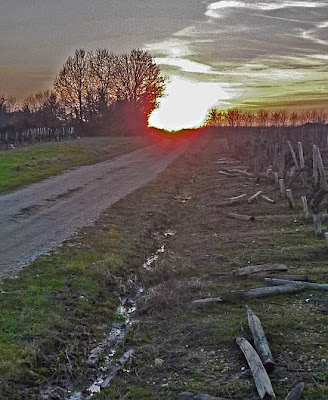 Sunset on Tuesday
She asked whether Walt and I have a vegetable garden. Yes, I told her, and we plan to start early this year. Digging in the dirt and planting some early spring greens of different kinds will at least get us outdoors. And you'll have the pleasure of having healthy food to eat, the pharmacist said.

When we moved to Saint-Aignan in 2003, we happened to arrive during a very warm, sunny cycle in the local weather. Summer of 2003 was the Grande Canicule, the "great dog-days" or heat wave. The summers of 2004, 2005, and 2006 were sunny and warm, with enough hot weather to make us feel like we were having a real summer every year.

The Renaudière vineyard in February, with our house
and hamlet in the distance
More importantly, in winter — it seems to me, looking back — the days were often sunny, even if they were cold. Winter didn't start too early, and spring didn't start too late. In 2007, that cycle ended. Even the summer was gray, cool, and wet. The vegetable garden was basically a failure that year, and the winter started early and cold.

I think this year has been the turning point in weather cycles, like the 2003 heat wave. In other words, we were in the deep freeze in December and part of January. It was the first time we had snow so early and often. And there was little sunlight.

I am optimistic that another warm cycle is starting up now. Last summer wasn't too bad, even though people complained mightily that the weather wouldn't settle down, that one day was warm and the next cool, and that there was entirely too much wind most of the time. 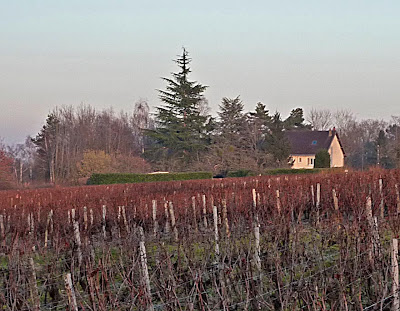 Our house and yard, on the edge of the vineyard
« Où il y a de la vie, » they say in French, « il y a de l'espoir. » In English, “where there's life there's hope.” We are planning to put in our garden early, and then transition from early spring plantings to the hot weather plantings that we normally put in around the middle of May.

Being retired and having a garden are two facts of life that make you really sensitive to the weather, year-round. If we lived in Paris, we probably wouldn't be as attentive — though like everybody else, we would complain about it. 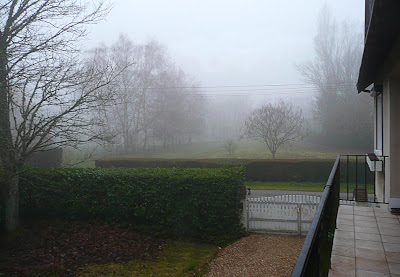 Mornings can still be foggy.
By the way, I got an e-mail from an American woman who comes from Kentucky but now lives in the Auvergne. She asked me if I had any collard seeds I might be willing to sell her. I've never found collard seeds here, and she said she hasn't either. She wants to grow greens. I'll buy her some seeds when I'm in North Carolina in March and send them to her when I get back.

That's the beauty of a blog. So many people get in touch. Did I tell you that I got an e-mail from the daughter of the people who run the local poultry business? They sell their products at the markets in Montrichard (Fridays) and Saint-Aignan (Saturdays). She said she was surfing the web when a topic on my blog about her parents' business caught her eye.

Look here and you'll find her message and my reply down at the bottom of the comments section. She evidently used Google's translation feature to get the gist of my post and was happy with what she read. That's nice.
Posted by ckb at 08:20