Yesterday Walt posted about sardines — the ones in tins (tin cans, we used to call them), not fresh ones. We'll have to buy some fresh ones again soon and prepare them. That means "cleaning them," and "cleaning" is a euphemism for "gutting."

When I was growing up on the coast of North Carolina, I used to go fishing a lot. Sometimes it was with my father, and as I got older it was often with cousins and pals. We would sit on a dock down on the sound and catch spots, hogfish, perch, and other small fish that were not too bony and were delicious to eat. We didn't mind cleaning them. 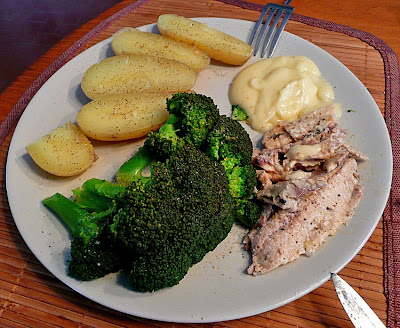 The sardine fillets were nice white fish, and they were good
with the mayonnaise, potatoes, and broccoli.
Anyway, sardines were not something we ate much back then. Maybe you didn't either. But if you want to eat fish in the future, you probably ought to develop a taste for them. I just read a newspaper that said nearly all the bigger fish in the oceans — salmon, tuna, cod, grouper — will soon be gone — fished out — and only small fish like sardines and anchovies will be left.

The sardines Walt bought in tins were really good. Some came from packing plants in Brittany (France), and others came from plants in Belgium and Morocco. Some are packed in olive oil, some in tomato sauce, and others are in lemon-basil sauce or sauce piquante like Tabasco. 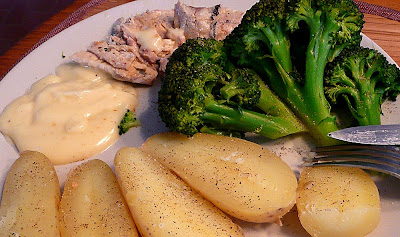 Here's a close-up.
In the past, I would have told you I didn't really like sardines. For one thing, I didn't like the bones. But these sardines we ate were filleted — no bones. Just nice white fish flesh, and it didn't have that fishy taste and smell you might associate with tinned sardines.

So I'm posting a couple of pictures I took of the plate at lunch. We had the Annabelle potatoes that I posted about a few days ago, and we had some steamed broccoli with the fish and potatoes. We ate the vegetables warm, not cold.

I also made a bowl of mayonnaise — that's a raw egg yolk, some Dijon mustard, vinegar, salt and pepper, whipped up with canola oil until it emulsifies and thickens. It was good with everything on the plate. If you don't already make your own mayonnaise, you should start. It's easy and it tastes a lot better than the stuff you buy in jars at the supermarket.

Another tinned food that I really like is cod liver — foie de morue. Now that might surprise you. We associate cod liver with cod liver oil, and nobody ever thought to like the taste of that stuff. But now we all know the benefits of fish oils, and the cod liver is packed in its own oil, with just a hint of salt. 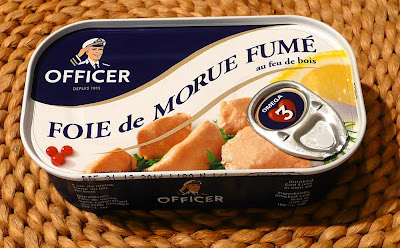 Smoked cod liver from Denmark
I started eating cod liver back in the late 1970s, in Paris. It's apéritif or snack food. The tins of foie de morue that I have right now come from a company in Denmark, and the liver is smoked. I don't know if cod liver is always smoked before being packed. 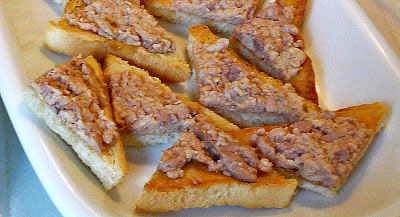 Foie de morue on toast triangles — good with
a glass of chilled white wine
I eat it, and always have, according to the suggestion de préparation on the tin: "Before opening the tin, put it in the refrigerator for an hour" — actually, I keep the tins in the fridge — "Drain off the oil, which is good to eat too. Serve the cod livers on toasted bread slices, seasoned with pepper and lemon juice." 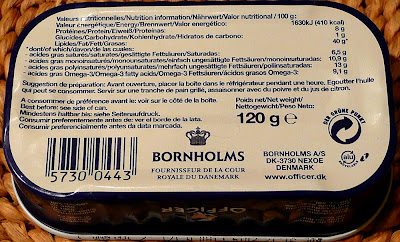 Here's the nutrition information, in many languages.
The livers can be mashed a spread on toast, in other words. Then grind on some pepper and sprinkle on a couple of drops of lemon juice. Delicious. the ingredients listed on the tin are "Cod liver it its own oil (99%), salt."

We don't eat a lot of fish these days, precisely because there is so much talk of so many species at risk of being completely fished out. Maybe cod liver isn't a product of a sustainable industry — I don't know. Also, fish is so expensive that it is tempting just to find other foods to enjoy. 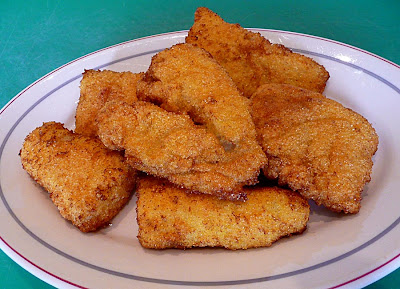 Here's the pollock, dredged in cornmeal and fried in canola oil.
It was really good and it's not something we eat often.
But we did have fish yesterday. It was some frozen lieu jaune — pollock or pollack, I think that is, Pollachius pollachius — that I bought at the Paris Store in Blois. We made fish and chips with the last of it. And no, we're not English. It was North Carolina-style, as far as I'm concerned — breaded with cornmeal.
Posted by ckb at 07:47