The other day we cooked food in a way we never had done before. Plastic wrap (cling film or film étirable) was involved. The French chefs and cooks who have shows on Cuisine.tv seem to use film pretty liberally.

We had bought a couple of chickens. Walt wanted the legs and thighs to make a Filipino recipe, Chicken Adobo, that he had seen on a blog. The recipe came from the New York Times. We put the wings — les ailes — in the freezer to use the next time we cook chicken wings. That left the chicken breasts, les blancs. 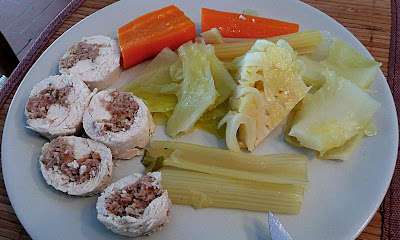 Stuffed chicken breast with winter vegetables
I liked the idea of making stuffed chicken breast of some sort. I made a stuffing of sausage meat, mushrooms, onion, dried chervil, and garlic, with nutmeg and some hot red pepper flakes, and a beaten egg to bind it all together. Into the stuffing went any little chunks of chicken that came off the carcass after I had cut the blancs off the bone.

My idea was to flatten the breast meat to make thin escalopes — scalloppini —that could be wrapped around the stuffing and tied up into a sausage shape with butcher's string. Everything was going along just fine until we realized that the flattened chicken breasts were not evenly shaped enough to contain the right amount of stuffing. 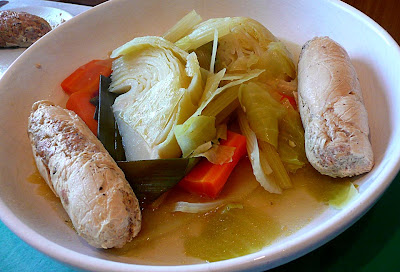 As served at the table
If we had been planning to cook the chicken in the oven, or even fry it, leaving places where the sausage stuffing was exposed might not have been a problem, and tying the rolls up with string could have been fine. But we wanted to poach the roulades, and we were afraid the stuffing would squirt out and the whole roulade would come apart in the poaching liquid. 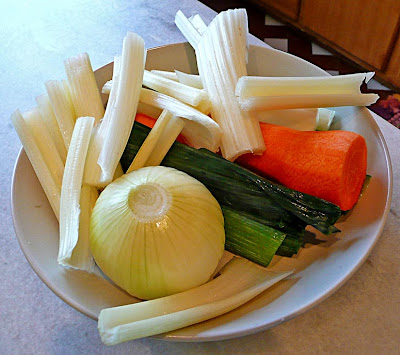 Vegetables for the poaching liquid
Walt said: "Use plastic wrap. They do it on TV all the time." Cooking in plastic wrap seems like a no-no after all we've heard about not using it in contact with the food you're cooking — in the microwave, for example. But hey, dozens of French cooks can't be wrong, right?

So we spread a sheet of plastic out on the work surface, set the stuffed chicken breast on it, and rolled it up into a log shape. We made two, and since I had made too much stuffing, we rolled up two "sausages" of that in plastic wrap too, sans poulet. We tied off the ends of the little boudins (sausages) with string. 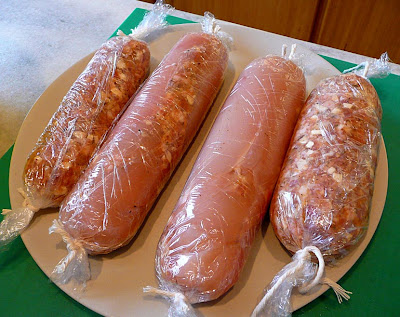 The roulades all wrapped and tied off
The poaching liquid was chicken broth that I made with the carcass of the chicken as we were doing all the other work. Into the broth went some bay leaves, black peppercorns and allspice berries, a big carrot, a big onion, about 6 stalks of celery, some leek tops, and half a cabbage cut into wedges. We placed the roulades on top of the vegetables — we didn't want the plastic to come into contact with the bottom of the pot, fearing that it might melt. 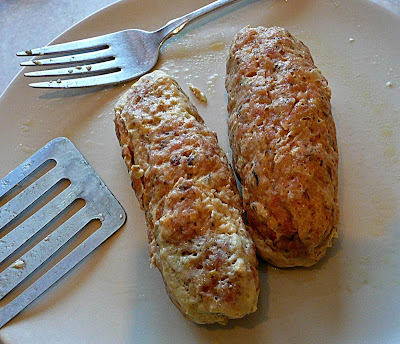 The extra stuffing mix made two nice little sausages.
Anyway, it worked out perfectly. The broth with the meats and vegetables cooking in it was amazingly aromatic. We joked that it was the film étirable (that means "stretchable") that smelled so good.

And when we started eating lunch, Walt said "wow, it really tastes like good plastic!" But it didn't. It was delicious. I'll do it again, with turkey or fish or veal and different kinds of stuffings.
Posted by ckb at 07:56