Stay put? Or move on?

Yesterday I read a blog that I've been keeping up with for several years. The woman who writes it and posts photos is an American who is married to a Frenchman. They met in the U.S. but soon moved to France. They're about my age — she has grandchildren.

They were living for a while in a small apartment in Paris, and spending most of their time there. They fixed the apartment up and sold it last year when they found a new, larger apartment that had just gone of the market. They moved, but not very far. They've been having some work done in the new apartment — updating a bathroom — and it has been taking a lot longer than they were led to believe the renovation project would take.

But these people also has a house in Provence. They've spent quite a bit of time down there over the past few years, and they've also had a lot of work done on the house and in the yard there. There's a pool, a pool house, a garden — everything you might dream of. 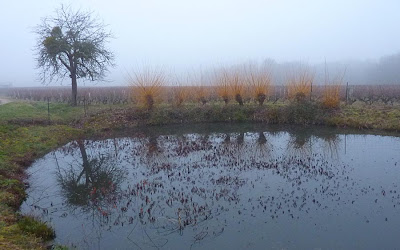 Lots of fog this morning
And then suddenly, a couple of days ago, in her Valentine's Day post, the American blog author announced that she and her husband had sold the house in Provence. She said she loved the house itself, but the yard work was a lot of trouble. Pests, including thousands of snails, became the bane of her existence as a gardener.

All this made me think about our options here. Now, I know I couldn't live in Provence. There are too many cypress trees down there, and I'm allergic to the pollen. Tests showed me that I'm also allergic to olive tree pollen. So Provence is out of the question. Besides, everything down there is pretty expensive, I think. And it kind of shuts down in the winter, when the tourists aren't there.

Actually, I wouldn't want to leave this place to move to another house out in the country. But, on some days, it feels like it would be fun to live in a city again. Or a town, at least. Tours, Blois, or Bourges, just to name the closest cities, all have their attractions. Wouldn't it be nice to be able to walk out the front door and have restaurants, cafés, and shops within easy walking distance?

I don't know if I'd be able to put up with cramped quarters, city noise, and the lack of outdoor space. But over the past 40 years, I've lived in Paris (at Les Halles), Washington DC (on Capitol Hill), and San Francisco (near Japantown), quite happily. I also lived in the Paris suburbs for a while, and in the middle of the suburbia that is Silicon Valley. I didn't like those so much. 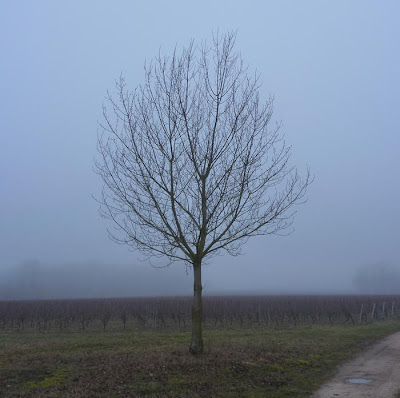 When you hear about people suddenly selling their house in the country — and not just any country, but greatly romaticized Provence, with its warm (hot) weather and deep blue skies — it makes you wonder. We could put our house on the market and look for an apartment or a townhouse in a city or big town. Or in a village with shops and a market.

It's time for me to go out for the morning walk with the dog. What would walking the dog involve if we lived in a town or city? Well, yesterday, I went to SuperU to get some groceries. There are several apartment complexes right next to the supermarket parking lot. I saw a man walking a little dog on a leash around the side and back of the supermarket, right next to the recycling dumpsters, and behind and around parked cars. No thanks... 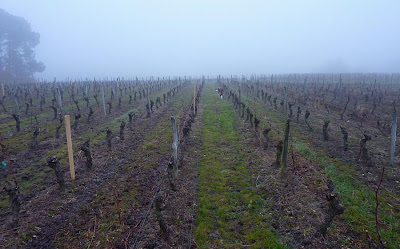 Callie out in the vineyard
Spring is coming, as I keep saying, and I find myself making lists in my head of the advantages of living here in the country outside Saint-Aignan. It's nice having a big yard, with plenty of room for a vegetable garden, for example. Of course, gardening is hard work, and your success is never guaranteed. You're at the mercy of the weather, pests, and diseases.

Another advantage is the vineyard, where we can go for long walks with the dog. There's no need for a leash; there are hardly ever any cars out there, even on the tourist road. Callie stays close and isn't at all prone to disappearing. Even when she chases a deer or a hare into the woods, she comes right back. And there's almost never anybody out there except the few people who work the vines, pruning them and maintaining the posts and wires that support them. They all know us, and are friendly with us and the dog. 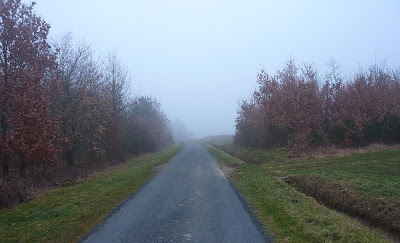 The route touristique through the Touraine vineyards
Okay, we have to drive to go anywhere else. And the car is now over 10 years old. But there are two large supermarkets and three smaller grocery stores within three or four miles of the house. There are also several open-air markets nearby, so there is no shortage of good, fresh, and inexpensive food. We get fresh bread delivered to our front door four days a week. We have easy access to good, inexpensive wine, straight from local growers and cooperatives. We live at the end of what is a dead-end road — at least the paved part — so there is almost no traffic or noise.

Both of us being homebodies puts us at risk of becoming hermits, however. Some might say we already have become reclusive. We kind of hole up, since we have satellite TV, computers, high-speed Internet access, a chest freezer, and a well-stocked pantry. We see our neighbors some, but not really all that often, except to wave at them once in a while when they drive by. Several of the houses around us are unoccupied for much of the year.

There's no conclusion to this post. I'm just daydreaming, letting my mind wander. Now it's time to go start making lunch.
Posted by Ken Broadhurst at 09:27