A couple of years ago, my friend CHM and I went to see some old friends of his who live about halfway between Saint-Aignan and Paris. They are a couple, P. and M., and the woman, M., made an informal lunch for us.

The main thing M. cooked that day was some potatoes. They were thin-sliced, yellow-fleshed potatoes. She said they were charlottes, and she said she uses that variety for nearly every potato dish she makes. Charlottes are firm, semi-waxy potatoes, and they are especially good fried or sauteed, but also boiled or steamed and cut up into a salad. 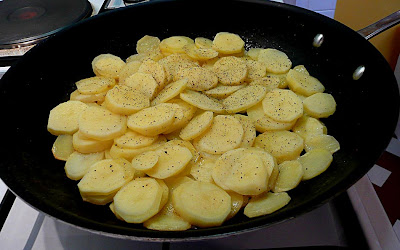 Raw slices of potato go into a hot pan with
melted butter, oil, or a combination of the two.
M. put the thin rounds of potato in a hot frying pan with melted butter in it. She let them cook until the bottom layer was golden brown, and then she started tossing them around. The slices ended up browning on both sides — not all of them, but enough so that, overall, the potatoes were both crispy — croustillantes — and tender — moelleuses — at the same time. 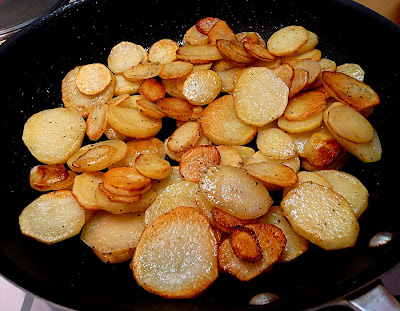 After a few minutes of cooking and tossing...
We feasted on them. They were not only delicious, but they were beautifully golden in color. M. had succeeded in making potatoes by a method that I had tried before but never really to my satisfaction. Her sauteed sliced potatoes were much better and prettier than mine had ever been. 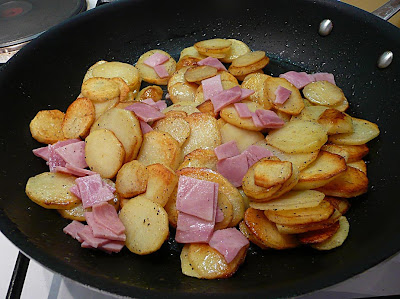 ...I added a cut-up slice of jambon de Paris (boiled ham)
that I happened to have left over.
Now I know the secret. I learned it by reading French master chef and restaurateur Joël Robuchon's book called Le Meilleur et le plus simple de la pomme de terre (1994). The book contains 100 recipes, and the one that clued me in was for pommes sautées à cru — sauteed potatoes using raw potatoes (as opposed to sauteed potatoes made with pre-cooked, blanched, or parboiled potatoes). 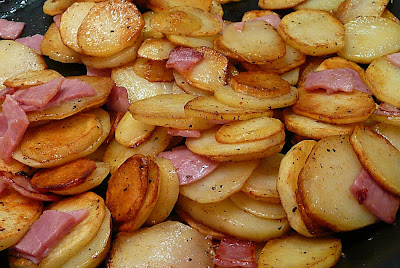 Pommes sautées à cru
Serves 4 or 5
Use nice, unblemished potatoes. Peel them and cut
them into slices 1/8" (3 mm) thick. Rinse the
slices and dry them in a kitchen towel.

In a frying pan, melt the butter or goose fat and sauté
the potato slices for 15 minutes. They should be
golden brown on all sides. Salt them, and
pour off any excess fat.

Put them on a platter and serve them.
Now that sounds simple enough, doesn't it? But just try it. You obviously have to toss the potatoes around (les faire sauter, or "make them jump") to get the slices to brown on both sides. when you toss them or turn them with a spatula, however, they start to break up, and they don't look as nice as you want them to look. These are not supposed to be hash browns.

The potato slices break up if, that is, you salt them too early. In the notes accompanying Robuchon's recipe, which take up half the page the recipe is on, he gives this crucial piece of advice, buried deep in a long paragraph: « Ne salez pas avant la fin de la cuisson, cela fait ramollir les pommes de terre. » — Don't add any salt until the end of the cooking time; otherwise, the potatoes will get soft.

I think that's the mistake I had been making for years. I would just automatically salt the potatoes when I put them in the pan, and then they would go soft and start to break apart. Now I sauté them without salt, and they come out much better. 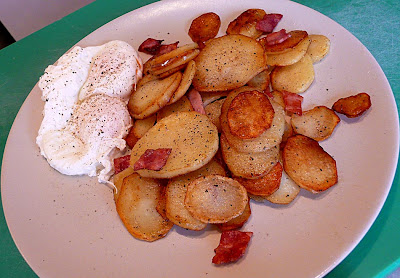 Good breakfast yesterday, with a couple of poached eggs
This time, I didn't even have any charlotte potatoes. I had some bintje potatoes, however, so that's what I used. They are a mealier (more floury) variety that make, according to Robuchon, good French fries and good mashed potatoes. Now I can tell you that they also make good sauteed potatoes using this method.

Here's a very detailed recipe in French with a lot of photos. It's interesting that salt is never mentioned.

For the potatoes I made, I used a combination of butter and canola oil. Next time, I'll use duck fat (but I'm afraid it may be too salty). By the way, goose or duck fat is much easier to come by in France than in the U.S. You can buy it in jars or tins a the supermarket.

I don't find any evidence on Amazon.com that Robuchon's book of potato recipes has been translated into English. Here's what he says about sauteeing raw potatoes, in my translation:

“Potatoes can be sauteed in oil, in a mixture of oil and butter, or — the height of refinement — in clarified butter. I myself prefer them sauteed in goose or duck fat. Whether you use oil, butter, or fat, put it in a cold pan and set it on the heat. When the pan is good and hot, put in the sliced potatoes and sear them on one side without shaking the pan or stirring them. Don't turn them over before they are well browned on one side. Turn the heat down once the potatoes are seared. Don't add any salt before the end of the cooking; otherwise the potatoes will go soft. You can add a little chopped garlic at the end of the cooking, but don't let the garlic burn. Just let it brown lightly. You can also toss the potatoes in a little fresh melted butter at the end of the cooking to add extra flavor and give them a nice sheen. Also, serve them with a little chopped Italian flat parsley, added at the very last minute.

“Be aware that sauteed raw potatoes won't wait for you. You must put them on to cook at just the right time so that they can be served when the have attained the ideal degree of doneness. If they wait, they turn soft immediately.”

Robuchon says to leave the potatoes unpeeled if they are very fresh. The peel gives the potatoes « un goût particulièrement intéressant », he writes.
Posted by ckb at 07:39