Battue is one of the many French words that are hard to translate into American English. It's an organized hunt — “an organized shooting party” during which hunters beat the bushes to flush out game animals, as one dictionary says.

Battu is the past participle of the French word for “to beat” — battre. It becomes a feminine noun, une battue, in the usage I'm talking about. The term battue isn't in the American Heritage Dictionary, so I guess it's not used in the U.S. The British use it, apparently. 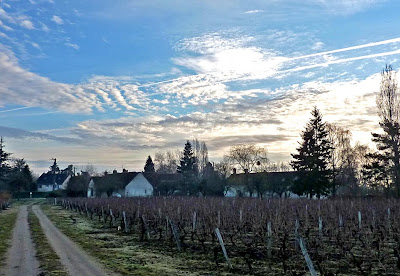 Our hamlet on a February morning
Maybe battue is used in America and I just don't know about it. I've never been a hunter. I just looked at the entry on battue on wiktionary.org and I see that somebody thinks the English term is derived from Portuguese batuda or Italian battuta. That's funny, since battue is obviously the French word. 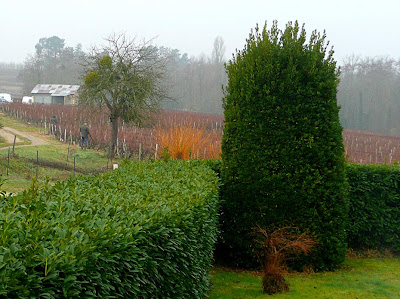 Hunters waiting with guns at the ready
Okay, I've gotten carried away with the linguistics of it all. There was an organized hunt of the kind called a battue out in the vineyard Sunday morning. Except for such events, for which signs and guards are posted along the roads to warn motorists that large game animals might suddenly jump out in front of their cars, the winter hunting season is over in our area. 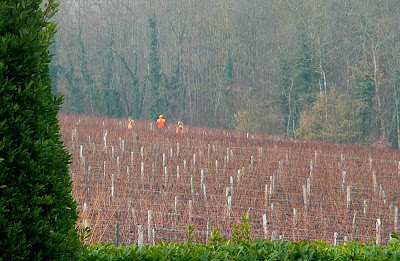 I saw at least one woman hunter out there Sunday morning.
I didn't see any evidence that the hunters actually bagged anything. I don't know if the hunt was for foxes, which are considered a pest around Saint-Aignan (and other places) or deer (also a pest). Populations have to be kept under control, they say, because these animals no longer have any natural predators. We see deer frequently, and we've seen foxes a few times. 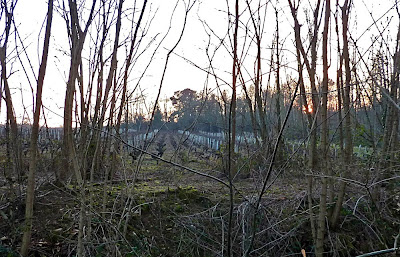 There are woods all around the vineyard.
I don't know if badgers are hunted, but I know there are some around here. A neighbor told us recently that she often sees a big badger crossing the road down below us when she is driving to work in the morning. I've seen badgers on my morning walks out in the vineyard. And there are hares too — Callie and I see them regularly.

Hunters, dogs, and, in the distance, some hikers coming
through the vineyard Sunday morning
There were a lot of hunters out there beating the bushes, or waiting with guns at the ready at the ends of rows of vines, but there were no animals that I could see — dead or alive. A couple of weeks ago, we were out driving in the forest south of Saint-Aignan, on our way to Preuilly-sur-Claise on a Sunday morning, when suddenly eight or ten deer, including a large buck, came out of the woods and crossed the road right in front of us.

I had to slow down to let them finish crossing. There was a battue in progress that morning, in that area. Like here, on Sunday. This time, I stayed inside and just took some pictures from the upstairs windows.
Posted by ckb at 08:31