Okay, it rained yesterday. And this morning it is so foggy that you can hardly see the vineyard at all when you look out the back windows of the house. But that's fine — we actually need some rain. It's supposed to rain overnight tonight but be sunny, or at least only partly cloudy, tomorrow afternoon. Temperatures remain very mild for the season.

Yesterday, Walt got some leaves raked up and carried them out to the vegetable garden plots. We are still spreading leaves out there, because springtime is coming and that's when the really deep-rooted weeds grow. Here in northern France, we can't plant our summer crops before about May 15, so there's still plenty of time for hardy weeds to take over the space. 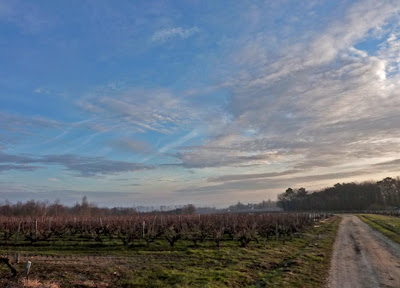 A February morning in the Renaudière vineyard
We won't grow potatoes this year. Instead, we plan to put in salad greens and cabbages early. One of the summer crops we'll try to grow again this year, after taking a year off, is green beans — haricots verts. Those were very successful a couple of years ago. We plan to try to grow fewer tomatoes — we usually end up with too many — but a lot of sweet corn and eggplants, as well as a good crop of sweet red bell peppers. 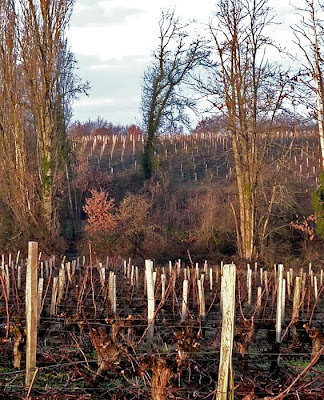 Hills planted in vines out back
We don't need to grow hot red peppers, because last year we had a bumper crop of cayennes, jalapeños, and banana peppers. I'd like to be able to grow okra, but I think it's just not hot enough here in the Cher river valley for the plants. Maybe it's time to start thinking seriously of having a greenhouse put in. 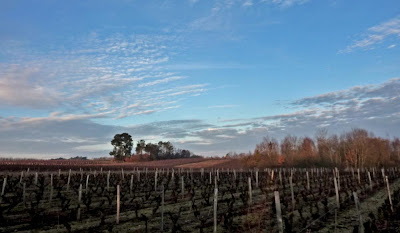 Western skies in February
This has been one of those weeks when the only outdoor adventures we've had have been walks with the dog and a little yard work. I did go out Tuesday to get a haircut and run an errand or two, but that was the last time. We haven't had any company either. It's just been the two of us — or the four of us, counting Callie the Collie and Bert the Black Cat.

Today we're invited over for lunch chez some friends who live just five or six kilometers down the road. That will be a nice outing. It's supposed to be cloudy but dry, with temperatures in the mid-50s F. Our friends are going to cook lunch on the grill, I think. That's always good food. 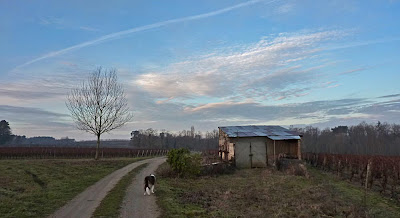 Callie planning out the route for her morning walk
Retirement. I'm still getting used to it. I regularly have long, complicated dreams about work situations. Sometimes the people in them are the people I worked with in Washington DC, San Francisco, or Silicon Valley. Sometimes the most unlikely combinations of people from these different eras of my life turn up in the most unlikely situations. 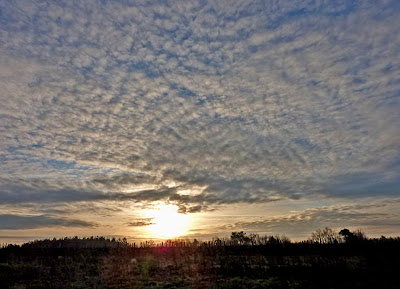 February sunrise at about 8:30 a.m.
Mostly I dream about problems I can't solve because I don't have all the information or tools I need. Something has been lost along the way, or become hopelessly confused. I feel like I personally need to find the solution but it's impossible. And then it's time for me to go home again, but I have to spend hours in traffic to get there. It goes on and on. 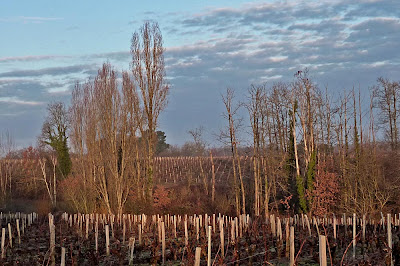 The trees mark a stream bed.
And here I am in the French countryside, hardly ever going anywhere in the car. And when I do there's no traffic. All the problems I face seem to have solutions and, besides, there's nobody breathing down my neck. Things get done when they get done. Or they don't get done. Only the seasons seem to impose deadlines and dictate the tasks that need to be tackled. But seasons are flexible, and more predictable than people. 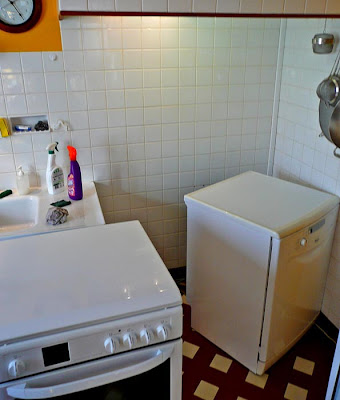 Spring cleaning in the kitchen means
moving the cookstove and dishwasher.
My general rule over the past eight years has become: try to do one thing a day. Pick up some leaves. Till up a garden plot. Cook something good to eat. Take some pictures. Of course, there is also the routine, the stuff I do every day. Walk the dog. Read. Laundry. Wash dishes. Watch a movie on TV if there's a good one on, and watch the news. And blog.
Posted by ckb at 08:08