The “pulled” meat we call “barbecue”

I'm still experimenting with the pressure cooker as a way to prepare tender, succulent, tasty meats that can be "pulled" or shredded and seasoned with barbecue sauces.

Where would you think you were if you went to a restaurant and were served the plate you see here? 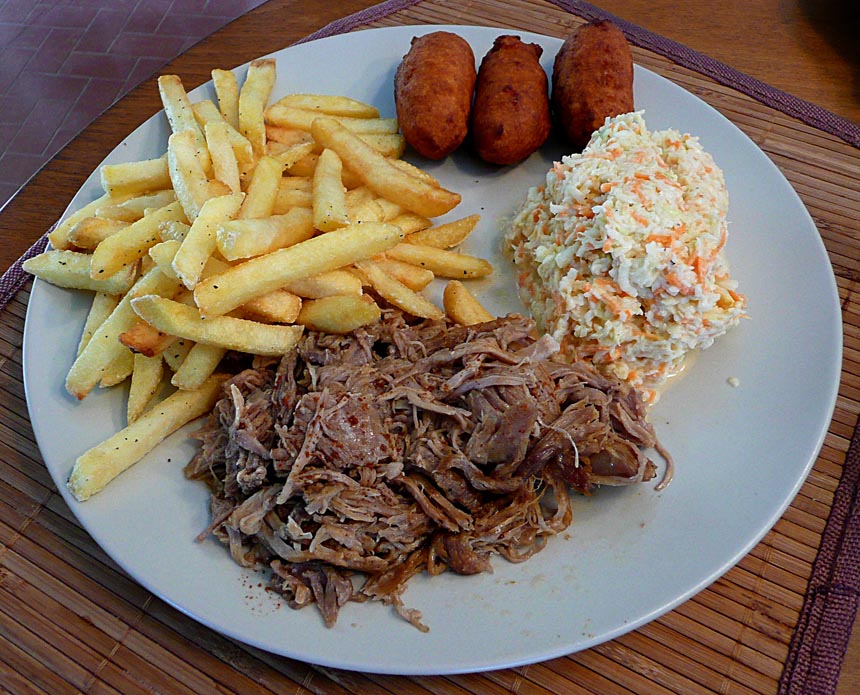 Our lunch a couple of days ago
I'd think I had landed in eastern North Carolina. Goldsboro, say, at Wilber's BBQ restaurant. A waitress has just set in front of me a plate of what they call "barbecue" there, served with coleslaw, French-fried potatoes, and hushpuppies.

That kind of barbecue is pork, traditionally. At Wilber's BBQ restaurant, it the whole hog, slow-roasted over hickory or white oak embers for many hours. Then the meat is "pulled" or shredded and seasoned with a vinegar-and-red-pepper sauce. No tomato, no ketchup, no sugar — just vinegar, crushed red pepper, salt, and some unspecified herbs and spices.

In parts of Kentucky, lamb or mutton is prepared much the same way, and it's delicious too. The meat is not vinegary. It's not pickled, just seasoned. The vinegar brings out the smoky flavor of the pork (or lamb) and counterbalances the richness and gaminess. 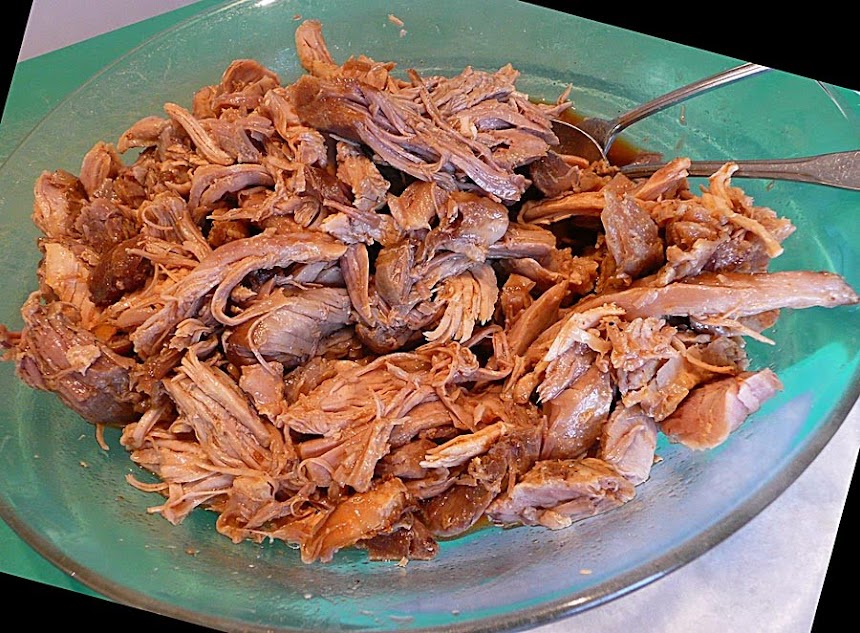 "Pulled" meat is shredded after it is thoroughly cooked
and already starting to fall apart.
You don't have to eat this kind of barbecue with coleslaw and fried potatoes, of course. It's good with greens, green beans, or mashed, boiled, or baked potatoes — whatever you want. Beans, like pintos or black-eyed peas. A French baguette or some cornbread, baked or fried.

This kind of barbecue is what I now make in the pressure cooker. I know it's not authentic, but it is really good. I season the meat — say 2 kg/4.5 lbs. of it — with a couple of tablespoons of smoked paprika and a good pinch of crushed hot red pepper. And salt of course. I put a couple of bay leaves and half a cup of vinegar into the inch or so of water in the bottom of the cooker that will steam the meat.

After the meat is done — it needs an hour or so of cooking in the cocotte-minute (pressure cooker) — you can boil down the cooking liquid until you have just enough left to moisten the meat after you've "pulled" it. You can add a little fat if you want that texture — duck, goose, or bacon fat, or even just vegetable oil — but that's optional. Then you can sprinkle on some vinegar and hot pepper sauce at the table, to taste. 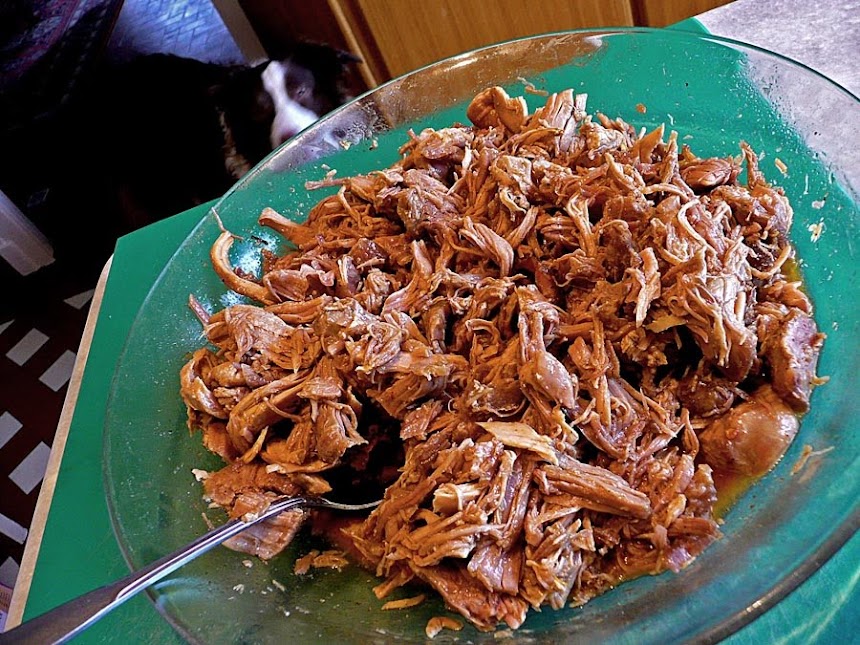 Guess who's interested and curious?
So what's so different about this version of pulled meat barbecue? Well, the pressure cooker, of course. But also the meat itself — it's turkey. Yes, turkey, not pork. And it is delicious. Slightly grainier, maybe, than pork, but not dry. Less fatty. I used two turkey leg & thigh pieces and cooked them with the skin on for the moisture it imparts to the meat. I removed the skin and any lumps of fat before shredding and eating the turkey meat.

I think somebody in North Carolina, which produces more turkeys than any other U.S. state, should start barbecuing and serving turkey the way they already barbecue pork and chicken. And it would be good to serve it with, for example, French-fried sweet potatoes. N.C. also produces more sweet potatoes than any other state in the U.S., from what I've read.
Posted by ckb at 08:08