Today, February 2, is La Chandeleur. It's the Catholic celebration of the presentation of the baby Jesus at the temple by his mother, Mary, 2000 years ago. Candles were lit. That's where the name comes from: chandelle is an old French word for candle, derived from the Latin candela, that gave us La Chandeleur in French and Candlemas in English.

The more modern, generic French term for candle is bougie, which is the "frenchified" name of a town in Algeria that exported great quantities of wax to Europe for candle-making in the Middle Ages. The older chandelles were made with tallow (fat, suet), according to the dictionary. And the name of the candles that the faithful burn in churches is cierges, which are typically long and thin. The name cierge derives from the same word as "wax" in French, which is cire. 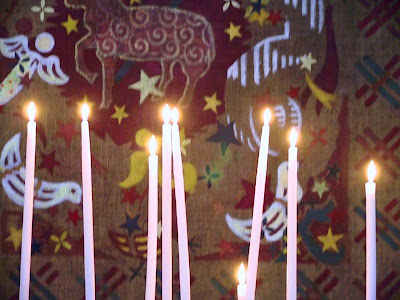 These are cierges, in a picture Walt posted on his blog in 2006.
But back to La Chandeleur. By tradition, everybody makes crêpes today in France. In England, those are called pancakes, but in America we use the word crepe (with or without the accent over the E) to describe the typically thin French-style pancake. I think our American pancakes, thicker and more floury, came to us from Scotland. Crepe batter is very liquid and the crepes can be almost paper-thin, and therefore not so filling.

Walt and I have decided to make cornmeal crepes today and fill them with savory rather than sweet ingredients. It's a recipe I came across on the Internet when I was looking for recipes for making Mexican-style corn tortillas. 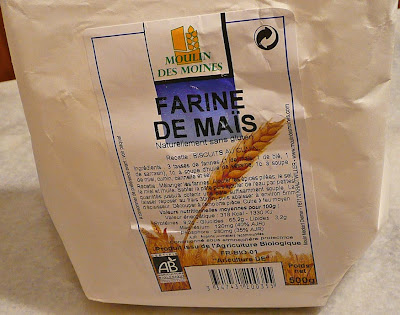 This is the cornmeal we are using for our crêpes today. Just to
confuse things, it's labeled « farine de maïs » — "corn flour" —
but it is definitely a meal, not a flour, of corn (or maize). It's
French (Moulin des Moines) and organic (biologique).
Meal is also an interesting word. It's typically American, I think. When I look it up in the English-French dictionary, the translation given for "meal" is farine, or flour. I've had a hard time explaining what meal is to people who speak British English. They immediately think of "corn flour," which I think is what we call "corn starch" in America.

In Great Britain, for example, oatmeal is called porridge, and the oats you use to make it are called porridge oats. In America, we buy oatmeal or Quaker oats (a brand name) at the supermarket and we cook them to make the oatmeal we eat for breakfast.

Actually, I bet most Americans don't know what "porridge" is — a soup or gruel of some kind, they might think. In fact, the word is evidently a corruption of "pottage" or the French potage, meaning a creamy vegetable soup, under the influence of an older term like porreie or poree, which is a form of the French name for leeks, or poireaux. How about that? Nowadays, in England, porridge is oatmeal. 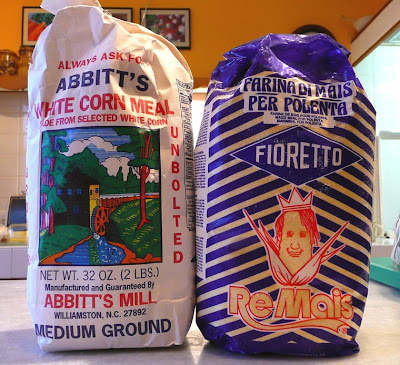 I went down to the freezer and I found these two bags of cornmeal,
one American (from North Carolina) and white; the other
Italian (purchased at the Paris Store in Blois) and yellow.
But back to corn (or maize). We don't have any everyday product in America that we might call "corn flour." Flour is automatically wheat for us. And by the way, corn in American means "maize" in British. (In the British Isles, the word "corn" means, or used to mean, any grain — wheat, barley, oats, etc. Maize is "Indian corn," the grain the Amerindians used. In Québec, I've seen and heard it called blé d'inde, "Indian wheat.") 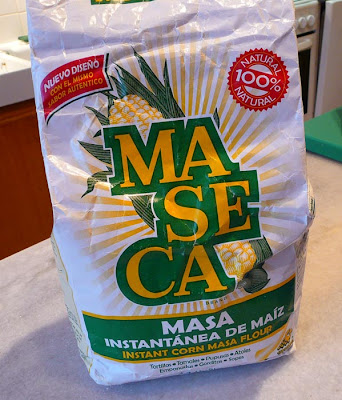 Rummaging through the freezer, I also found this bag of
"instant" masa harina that I had completely forgotten
we had. Now we can make Mexican tortillas.
But I shouldn't mention corn "flour" without mentioning Mexico's masa harina. That's what you make corn tortillas with, and it's more and more widely available in the U.S. nowadays. It's called masa harina, which is, literally, farine de maïs or "corn flour." It is not at all the same thing as cornmeal. It's made by a different process (which includes a step called "nixtamalization"), and it is much more finely ground, resembling wheat flour rather than cornmeal.

Corn is made into meal in the U.S., or into starch. In French, the word for "starch" in this sense is fécule, and you can buy, for example, fécule de pommes de terre, or potato starch, at the market and use it to thicken your sauces. You can also buy fécule de maïs, cornstarch (or corn starch), but nobody ever calls it that. It is always referred to by a brand name, Maïzéna (pronounced [mah-ee-zay-NAH]). 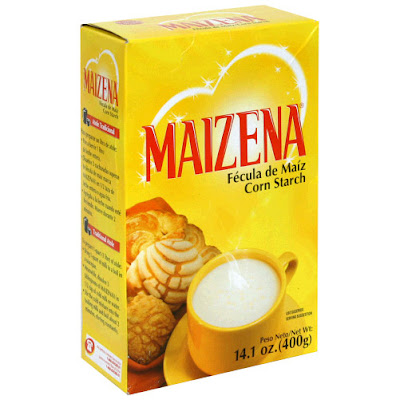 Cornstarch (Am.) or, I think, "corn flour" (Br.),
or fécule de maïs (Fr.) is called Maïzéna in France.
In fact, the English-French dictionary gives both farine de maïs (corn flour) and maïzéna (with a lowercase M but marked with an ®) for "cornstarch" — and that's what I think our British cousins call cornstarch: "corn flour." That is not at all the same thing as cornmeal.

In the American usage, a "meal" is a coarsely ground grain — coarser than a "flour." The word "meal" is obviously related to the word "mill." I don't know if British English uses the word "meal" in this sense. Somebody will tell me. The terms "corn meal" and "cornmeal" are absent from the (British) English-French dictionary. 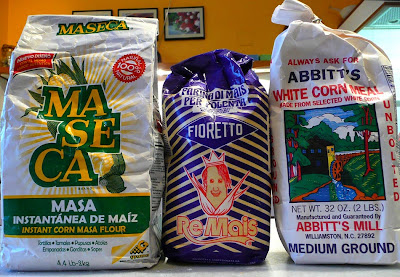 Masa, polenta, and meal
In French, a grain that is coarsely ground is called une semoule — semoule de blé, semoule de maïs. I just looked, and the French-English dictionary actually does give "corn meal" as the translation of semoule de maïs (at semoule). Semoule is also translated as semolina and is the term used to describe the couscous "grain" we've all become familiar with. I put "grain" in quotation marks, because couscous is actually a form of pasta, not a grain, meal, flour, or semolina.

So if you say "corn meal" to speakers of British English, they are often not sure what you are talking about. And if you say semoule to speakers of French, they think either of couscous "grain" or semoule de blé dur, which is "durum" wheat semolina. Semoule means a sort of farine granuleuse, a coarse flour, according to the dictionary, and sucre semoule is a coarse-grained sugar. Durum wheat semolina is used in the manufacture of pasta, including couscous.

At the end of the day (as the British say), what you look for in France if you want to make American corn bread (a.k.a. cornbread, cornpone, etc.) goes by an Italian name: polenta. How's that for convoluted? But you need to find finely milled polenta. The coarser varieties, which resemble what we call "grits" (or the older form, "hominy grits") in the American South, won't do for cornbread. Coarse polenta resembles grits in texture, but not it color — it's yellow, not white. You boil it and eat it as a kind of porridge.

Here in France, I can buy finely ground polenta, or corn meal, at the shop in Blois called Paris Store, which specializes in products imported from China, Vietnam, Japan, and other Asian countries. What's up with that?

Oh, back to the corn meal crêpes. They are made with equal quantities wheat flour (farine de froment in French) and corn meal (semoule de maïs). There's no British corn flour (maïzéna) in the mixture. Otherwise, they are just like the standard French crêpes.
Posted by ckb at 07:09