“Okra is an annual flowering hibiscus (Abelmoschus esculentus) native to Africa. Its flowers, whose bright yellow petals deepen to rich burgundy red at their base, are some of the loveliest of all the hibiscuses. Of course, okra isn't grown for its ornamental qualities, but for the mucilaginous seedpods that develop after the brilliant flower has faded.” 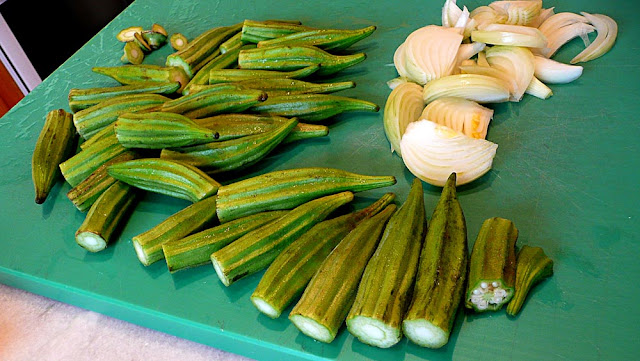 Okra, the seedpod of an annual hibiscus plant

That's how Damon Lee Fowler introduces the Southern U.S. specialty vegetable okra in his book Classical Southern Cooking. Okra (a collective noun) is actually a fruit (like the tomato) and is known by the plural count noun « gombos » in French, but is not much known in France at all. It's something we don't find here in Saint-Aignan — at least I never have. 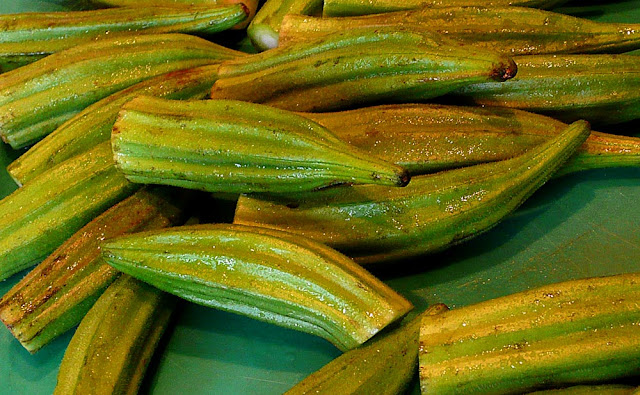 Here's a close-up of the okra pods...

However, a friend of ours went to Blois the other day and went shopping in a grocery store called Grand Frais. It's a new shop and I haven't been there yet. What our friend found was a bin full of gombos — fresh okra. She was kind enough to buy about a pound of nice fresh okra pods for us and leave them by our front door later that afternoon.

She told me on the phone that evening that okra isn't something she and her husband eat, but she knew I did because she remembered reading about okra on this blog. 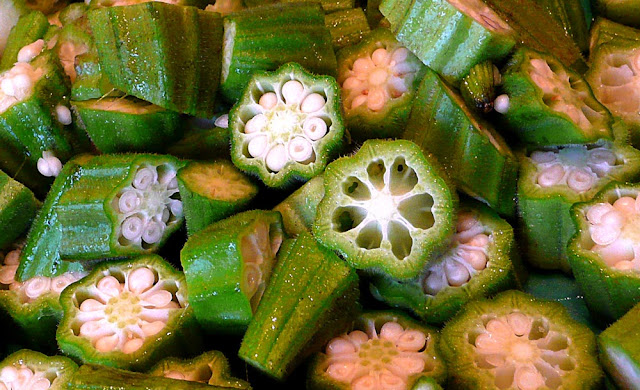 ...and here's what the okra looks like when you slice them.

“We tend to think of this vegetable as peculiarly Southern and African-American,” Damon Fowler writes, “but it can be found in Central and South America wherever Africans were settled and is also known to the cooking of the Middle East.” Well known is the Louisiana seafood stew called “gumbo,” in which okra serves as a flavoring and natural thickening ingredient. 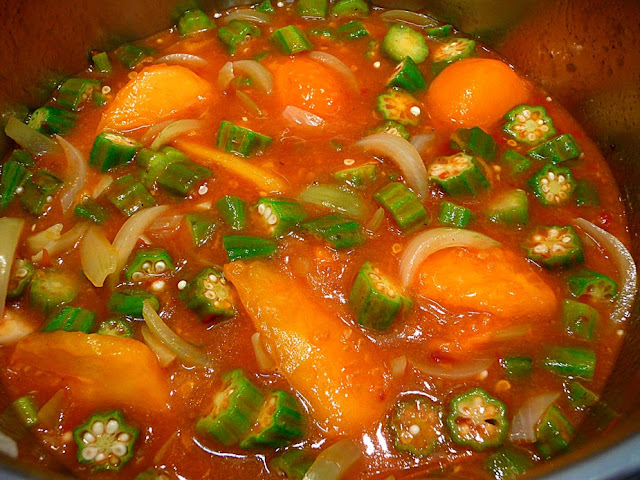 Sliced okra cooking with wedges of yellow tomatoes and
red tomato sauce, along with onions and garlic

I've blogged about okra before (2010 and 2009, for example), and pointed out that a woman I knew and went to university with in Paris back in the 1970s surprised me one day when she cooked what she called bamia or bamies — it was okra. And the woman who cooked them lived in the city of Thessaloniki in Greece when she wasn't studying French in Paris.

I may soon have to stop stating so categorically that okra is hard to come by in France. I haven't yet found it, fresh or frozen, in our Saint-Aignan SuperU or Noyers-sur-Cher Intermarché, however, or in the farmers' markets. It seems to be sold only in specialty stores, in the cities. 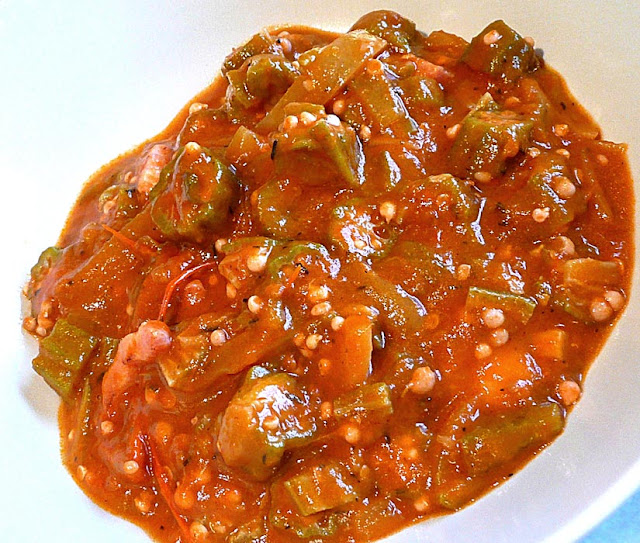 This is the stewed okra and tomatoes you end up with.

Okra is good pickled in vinegar; dredged in cornmeal and deep-fried; stewed and served with rice; or, my favorite way, cooked with tomato sauce and chunks of tomato and onions.

I made okra and tomatoes yesterday, using sliced onions, sliced garlic, a pinch of dried thyme, and a pinch of hot red pepper flakes. It needs lots of salt and pepper, of course, as well as the one ingredient that makes the dish very Southern (the U.S. South, I mean) and also typically French: fried smoked bacon or lardons fumés, along with some of their cooking fat. 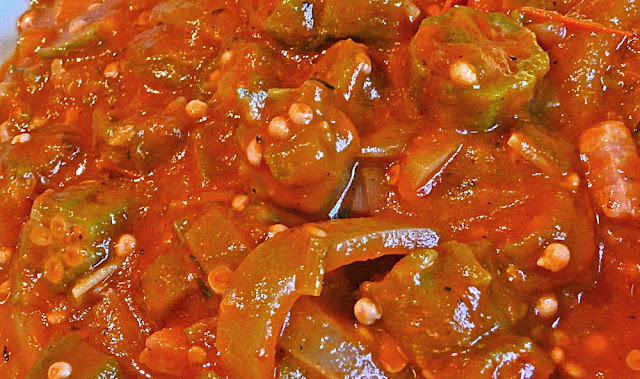 And here's a close-up. The okra seeds are tender, not hard.

We'll eat the okra and tomatoes not with rice but pasta — linguine, specifically — and an escalope de dinde à la milanaise. That's a thin slice of turkey breast that is breaded — in my case, just dredged in cornmeal — and panned in butter. Turkey scallopini, I guess, is the term used in American English — we call so many foods by more or less Italian names.

The okra and tomatoes will make a good sauce for the pasta and for the turkey. “The pairing of these two vegetables has all the makings of a great love story...,” Damon Fowler writes. “What they do for each other must be tasted to be understood; tomatoes lend their sunny tartness while the okra, in turn, enrobes with its silken texture, blunting the [tomatoes’] acid bite...” 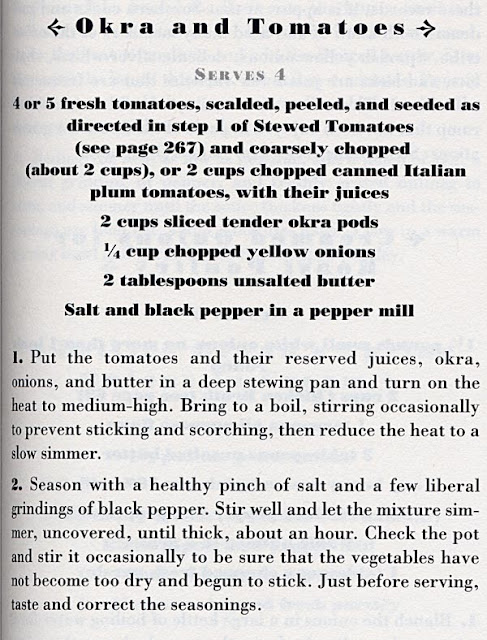 Notice that I didn't use the S-word even once in this post. Happy eating!