A couple of days ago Walt and I drove over to Montrichard because we had a piece of artwork and a poster that we wanted to have framed. It was a successful (though expensive) trip and we learned some new technical terms in the process.

Do you know what the mat (or matte) is called in French? You know, the cardboard "inner frame" that you put around the picture, inside the wooden or metal frame? It keeps the glass from touching the artwork inside the frame. 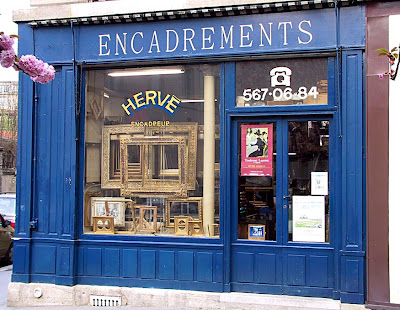 A frame shop in Paris

From the dictionary, under "mat" or "matte": "A decorative border placed around a picture to serve as a frame or provide contrast between the picture and the frame." In French it's called a « passe-partout ». I guess the meaning comes from the fact that you can put a mat of the size you want to make the piece you are framing fit in standard-size frames. It can "go anywhere."

Oh, and the mat can have a beveled edge — « un biseau » — to give it an even more finished look. The bevel can be in a color that contrasts with or matches the mat and the artwork.

This isn't exactly the poster I'm having framed, but it gives the idea.

We have a poster that is a map of the Loire Valley vineyards that we wanted to have mounted on a board. Glued on. We didn't necessarily want it framed and put under glass. "Mounting" in this sense in French is « encollage ». That makes sense, but I probably would have talked about « collage ». I guess that's another technique entirely.

And at the framing shop we saw a sign saying that the standard cost of « montage » was 15 euros. « Montage » doesn't mean "mounting" but framing. It means putting the frame together.

And guess what the frame itself, or the framing material, is called. It's called « la baguette »! And no, it's not made of bread. « Baguette » means "wand" or a thin strip of, usually, wood. A baguette of the kind you have with your lunch is a "wand" of bread. An orchestra conductor conducts with a « baguette » in France. And you eat Chinese food with baguettes — chopsticks. A witch or wizard wouldn't be complete without a baguette magique.

For the poster/map of the Loire Valley vineyards, which I bought five or six years ago in Paris, I ended up asking for it to be mounted on a « support » — a board — and framed. Not under glass, but under non-reflective plexiglass, sans passe-partout. That way, we'll be able point at the different places around our area and run our fingers over the map without worrying about getting it dirty.

The other piece is an original piece of artwork that Walt's cousin did. It will be framed avec passe-partout, under non-reflective glass — verre anti-reflets.

P.S. CHM, I'm not sure what the plural of passe-partout should be. Robert says the term is invariable. But French web sites I find spell the plural as I did in my title. Everybody, the rules for forming the plurals of compound nouns in French are quite complex.
Posted by Ken Broadhurst at 07:35