Okay, I'll chalk it up to cabin fever. I don't really want to live in a city again. Too cramped, too polluted, too noisy, too expensive. Problem is, the weather forecast here in Saint-Aignan is for rain for the next week. We haven't had a lot of really wet weather recently, but it seems we are entering a rainy period. 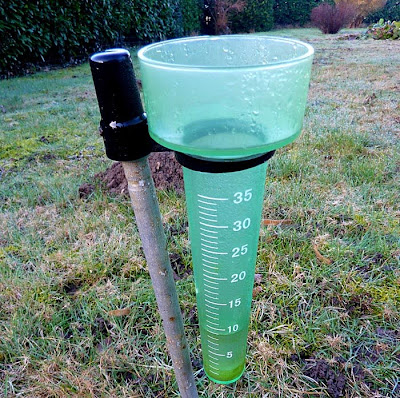 Rain in the gauge in the back yard
What to do? Well, we have to go out with the dog anyway, so we'll get wet. At least it's not cold at all. It's sort of raining this morning — it's more mist than real rain. The real rain is supposed to arrive Monday. If the weather people know what they are talking about. We can't complain. February has been pretty nice up to now. 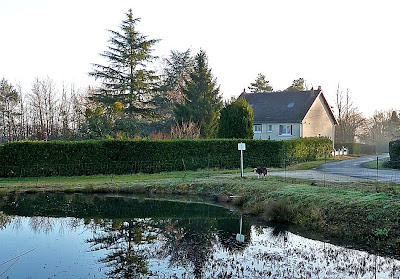 The pond out back is really full. It overflows now
whenever the weather is rainy.
Cooking good food is the best antidote. Today, leg of lamb with French flageolet beans. That's what people in France eat, traditionally, with leg of lamb, called gigot d'agneau. Flageolets are immature white beans that are harvested when they are still pale green in color. They were first cultivated in the late 1800s by a farmer in the Paris region. 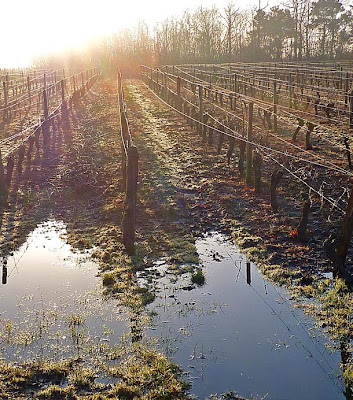 Rain puddles in the vineyard
It's funny, because a flageolet in French is also a specific kind of musical instrument. The dictionary says it's a “small flutelike instrument with a cylindrical mouthpiece, four finger holes, and two thumbholes.” It toots. Enough said, no?

The leg of lamb I'm cooking comes from New Zealand. We buy New Zealand, Australian, and Patagonian gigots fairly frequently, but usually we cook them in spicy Moroccan-style tagines, "barbecued" with a spicy vinegar sauce, or as Irish-style stew with vegetables and herbs. 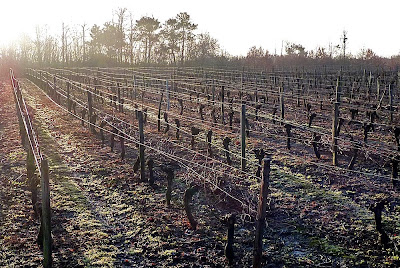 Heard it through the grapevine
Today, I'm just going to roast the leg of lamb, which weighs 1.825 kg, or about 4 lbs. From what I've read, it should take just an hour to cook in a hot oven, and then it will need some resting time so that it cooks through evenly but remains approximately medium rare.

If we don't like it cooked that way, we can always re-cook the leftovers in some other form, such as stew or hash. Hachis parmentier, for example — shepherd's pie. What ever we end up doing, we'll be eating lamb for the next few days, prepared one way or another. Poor us, right. 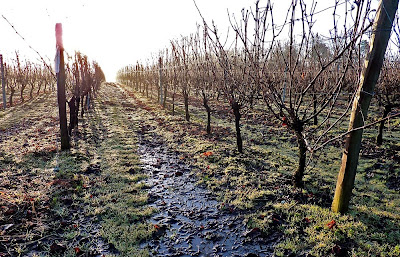 Vines in February
We've been eating a lot of chicken and turkey recently. This will be a good change. One butcher here in Saint-Aignan told me that his customers don't buy much New Zealand lamb. They much prefer French lamb, whether from Normandy or the Limousin region.

We usually buy French lamb when we want a roasted leg, but it's really expensive — 30 to 40 euros for a leg, compared to 10 euros ($14.00 U.S.) for a 4 lb. roast. French lamb is supposed to be more mildly flavored. Once friends in Normandy served roast leg of lamb for lunch. It came to the table all sliced. The meat was so white and mild, though full of flavor, that I thought it was veal. 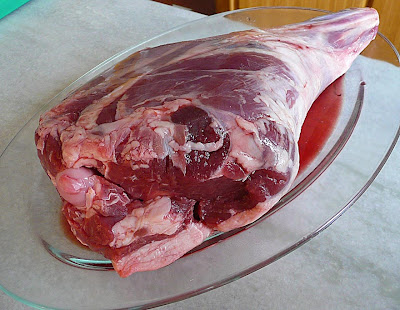 New Zealand lamb is sold as a “three-quarter leg” — in French,
a gigot raccourci, or “shortened” leg. The hip bone and saddle
have been removed, so just the thigh (la cuisse) is left.
Maybe going away for a few days will be a good change for me. I'll be in North Carolina for two weeks in March. I think the weather there will be springlike (with any luck). I saw on the web that the high temperature in the Raleigh-Durham area yesterday was 78ºF — that would be a hot summer day in Saint-Aignan (just over 25ºC). And no, North Carolina is not in the southern hemisphere!
Posted by ckb at 09:37