Snippets and a recently found recipe

We changed our clocks to heure d'hiver in France overnight, and it really is disorienting. I tried not to get out of bed at 5:30 this morning, even though my body knew that it was really 6:30 and was ready to get a move on. Now I can't believe it isn't yet lunchtime.

At the same time, it's nice to have daylight at 7:30 rather than 8:30 for walking with the dog, especially on Sundays. That's because Sundays are hunting days, and the hunters with their guns and dogs show up in the vineyard at 9:00 a.m. It's better to get the walk done before they arrive. (I just heard a loud gunshot from just out on the edge of our property.) 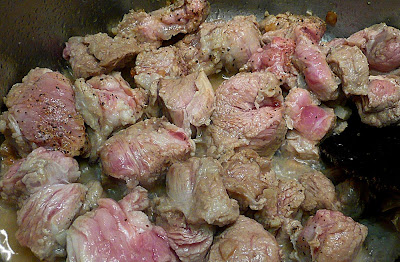 Sauté de veau. I recently read that veal is a food
that most Americans won't eat. Incredible...
I actually walked Callie late yesterday afternoon and again this morning, for the first time in a week. They were short, slow walks, as much as possible on even pavement. My ankle still hurts, but I don't want to give into it completely. It's been a week now since I fell and sprained it. The doctor says I should go get it x-rayed, and I have an appointment to do that on Tuesday.

Monday's a holiday, La Toussaint — All Saints' Day. Most businesses will be closed, though a lot of them are closed on Mondays anyway. The radiology lab is closed tomorrow. It's over in Selles-sur-Cher, 10 miles up the river from Saint-Aignan.

I also went to the supermarket yesterday for the first time since I sprained my ankle. It was crowded with people shopping for their holiday meals. The service station, however, looked like old times. It was open, with no waiting. There weren't more than three or four cars there, and there are four sets of pumps.

We have company coming to spend three days with us. It's old friends from California — we've known each other for nearly 20 years now, from the days when we worked together in Silicon Valley at Claris, Apple's dearly departed software subsidiary.

For dinner, I'm making one of my old standby recipes, with is Veal with Garlic and Olives. Here's the recipe, from Monique Maine's classic paperback cookbook called Cuisine pour toute l'année (1969). It's easy: 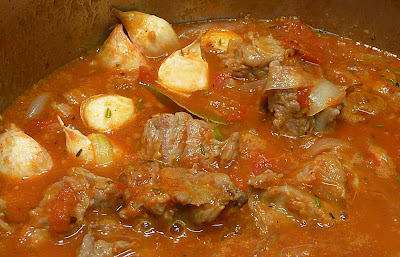 
Since it's a recipe from Provence, I use olive oil, even though back in the 1970s cooks in northern France seldom did. They used peanut or soybean oil back then. I also put in 10 or 12 whole garlic cloves, not just two. And I put in both green and black olives, pitted or not. Just tell your guests that there are pits in the olives, if there are, so they don't break a tooth.

This recipe was hidden from me for more than 30 years. It does not appear in the index of the two copies of Monique Maine's book that I've had forever. Those two are starting to fall apart, so I recently bought a new copy, which is a new edition. Glancing through the index the other day, I came upon the recipe, not under Veau, where you would expect to find it, but under Sauté de veau. Who knew?

I went back and looked through the two previous editions. Nothing in the index. But the recipe is actually in both books. Hiding. And not one word of it has been changed since 1969.

Here's a link to a similar thing I made and posted about a few weeks ago: Veal Meatballs with Olives. And a link to another Veal with Olives recipe from 2009. Both of those are in English. All would be good made with turkey or lean pork.
Posted by Ken Broadhurst at 09:55