All over France, trains are still running on limited schedules. About half to two-thirds the normal number of high-speed TGVs, standard Corail trains, and regional TER trains are running. But the worst thing is that fuel shortages are starting to be felt.

As Meredith said in a comment yesterday, gas stations around the country are starting to run dry and shut down. The morning news says Roissy/CDG airport only has a couple of days of jet fuel left. Jet fuel, diesel fuel, and fuel oil are all slightly different forms of kerosene. Did you know that more than half the cars sold in France these days have diesel engines? Our little Peugeot is a diesel.

Today was one of those days when you just want to pull the covers up over your head and stay in bed. Not because of the fuel shortages but just because of the miserable weather. I woke up in the 6:00 a.m. darkness to hear the pitty-pat of rain on the Velux windows upstairs. Here it is 8:00 and it's still dark and raining. I have to take Callie out anyway. 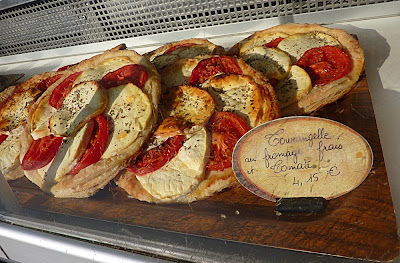 Tourangelle, a little pie made with fresh goat cheese
and tomatoes, seen at the Montrichard market
I don't think Saint-Aignan is feeling any of the shortages so far.
I just had to strike that sentence. The porteuse de pain — the bread lady — just came by. She wished me a « bon weekend » and I said « Vous aussi. A mardi alors ! » Tuesday is her next scheduled delivery. « Oui, mardi je passerai s'il y a du gasoil, she answered. Toutes les pompes sont à sec, à Amboise, à Saint-Aignan, partout ! » So the pumps are dry and there's no gasoil — diesel fuel — to be had around here. That was news to me. Luckily the Peugeot's tank is three-quarters full. 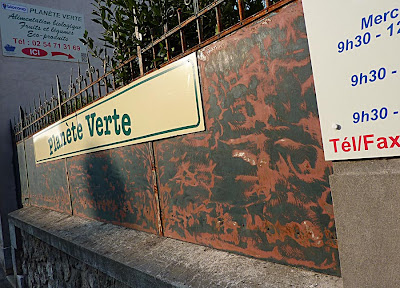 Planète Verte is an organic grocery co-op in Montrichard.
Yesterday we went over to the market in Montrichard, the town 10 miles east of us, down the river Cher. There's a nice outdoor market there on Friday mornings, and there's also a co-op grocery where you can buy organic and exotic products you don't find in the outdoor markets or supermarkets. We bought some millet and some corn meal at the co-op, and other things at the outdoor market. 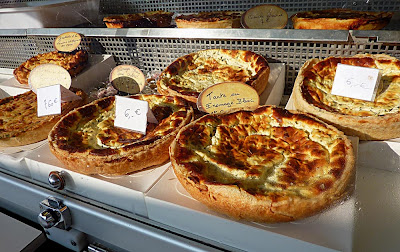 Local tartes and quiches at the market in Montrichard
We're having people over Sunday afternoon — tomorrow, yikes! — for dinner. The plan is to make pumpkin raviolis as an appetizer, and then have a roasted guinea hen with caramelized shallots, along with some oven-roasted winter vegetables, as the main course. Then there will be green salad and cheeses: a Neufchâtel from Normandy, a Saint-Nectaire and a wedge of Cantal from the Auvergne region, a local goat cheese from the farm-inn just up the road, and, if the cheese vendor at Noyers has any on Sunday morning, a blue cheese made from goat's milk that is his specialty. For dessert, Walt plans to make a walnut tart, using some maple syrup we got as a gift from visiting Americans. 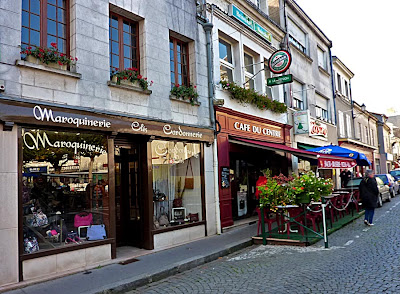 P.S. Noon: I just came back from SuperU. There were 15 or 16 cars waiting at the pumps to fuel up, where usually there might be three or four. I didn't see any signs about shortages, but if business like that continues it won't be long now.
Posted by Ken Broadhurst at 09:35