I once "counted" all the photos stored on my hard disk. Well, I let the computer count them. I just searched for all the files on the computer that have a .jpg extension. I think the total was about 125,000. And that doesn't count the files with .bmp and other image extensions. 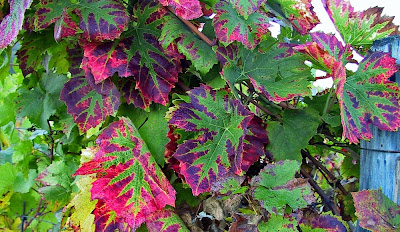 Autumn leaves here in Saint-Aignan are grape leaves.
You can click on the photos to see them at a larger size.
I got my first digital camera in 1998 and started taking pictures. Before that, I never enjoyed photography. I'm on my sixth camera now. Two Kodaks, two Canons, and now two Panasonics. By the way, my current cameras are nearly totally automatic, and pretty small. No fiddling with complicated settings. And I admit I use Adobe Photoshop a lot. 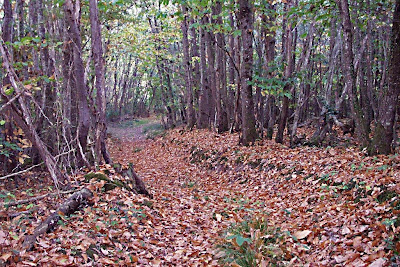 The local woods in autumn
That many photos is kind of overwhelming to think about. I'm a mitrailleur with the camera, they would say in French — in other words, I use it like a machine gun. Snap snap snap. That's a gruesome image, but vivid. So far, however, I don't think I've actually hurt anybody with it. But why take one picture when you can take ten? 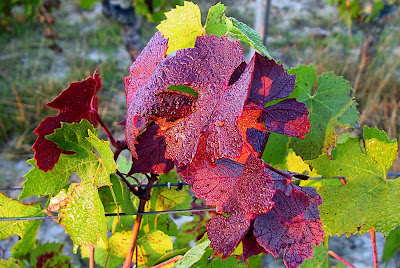 More grape leaves in autumn
Because all the photos are stored by date and not by any kind of subject-matter scheme, it's nearly impossible to find any particular one when you want it. All you can do is go back and look at a particular day, month, or year. And pretty soon you're tired out, because there are so many of them. 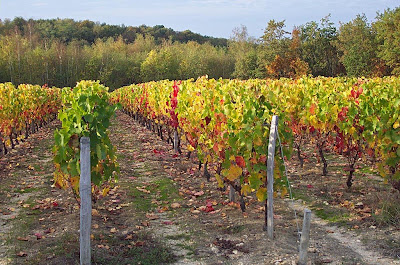 Rows of vines
By the way, I actually have all the photos on two redundant hard disks, so that if one of the disks gives up the ghost, I'll still have the other one. I also have them all on CDs and DVDs — I do a monthly backup. If both of my hard disks die, I'll still be overwhelmed with photos. 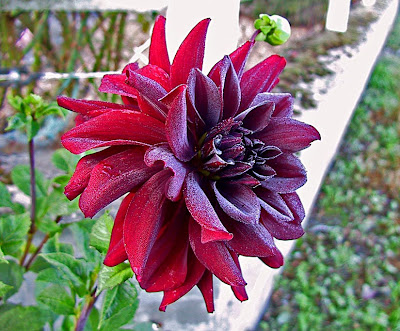 A dahlia
I guess it's kind of obsessive. Aren't we all? Anyway, today's photos are ones I took the week of 051010 to 051017. Four cameras ago. I don't have the cameras any more, but I've been careful to save the pictures. I started this blog later that month, nearly five years ago already.
Posted by Ken Broadhurst at 08:56