We grew peppers this year. Chillies. Piments. Walt did it, really. And what a success! Now the question is: what do we do with them all?

The last time we had a good pepper crop was in 2004, the first year of our vegetable garden here in Saint-Aignan. We grew cayenne peppers — piments de Cayenne. There were a lot of them, and we packed them in vinegar. We're just finishing the last jar of them now. When we tried growing cayenne peppers in subsequent years, they were a failure. They never produced peppers the way they did in 2004... until this year.

Red...
And that's funny, because in other years, we had great crops of red bell peppers. In 2004 or 2005, I harvested the bell peppers and put 6 or 8 of them on the table in the kitchen. My mother was visiting. At some point, I noticed her in the kitchen carefully examining the bright, smooth red poivrons.

When I walked into the kitchen, Ma looked up at me and exclaimed: "They're real, aren't they? They're so pretty that at first I thought they were wax, or plastic." But that year, we didn't get any cayennes. Last year, 2009, when the vegetable garden was a great success, the peppers didn't produce at all. The plants were sickly.

The funny thing is that this year's bell peppers never turned red. We had only one plant, but it did produce at least 4 gigantic green peppers. I finally picked them last week. They were still green. Compare that to the bell peppers we grew in 2006. 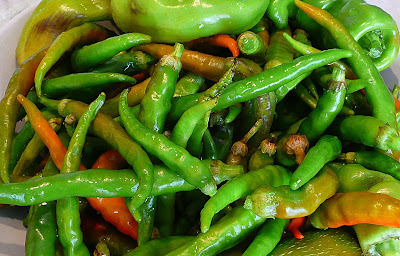 ...and green...
But back to cayennes. We grew those this past summer, and they did ripen. We also grew jalapeños and some other larger green peppers that we can't identify. Walt has already packed several jars of them, pints and quarts, in vinegar. That's the best way to keep them: Poke a couple of holes in each pepper with a skewer, pack the peppers into sterilized jars, pour boiling vinegar over them right up to the top of the jar, and screw on the lids while the vinegar is still burning hot. The jars will seal, and the peppers will keep indefinitely.

The vinegar the peppers have been pickled in is also good for making salsas or flavoring beans or greens at the table. It's good in Asian-style stir-fries, along with the chillies. You can pack either green or red peppers like jalapeños or cayennes this way. 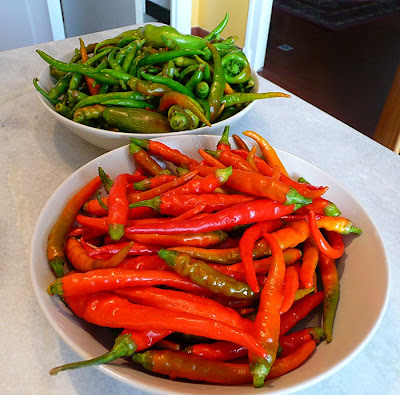 ... piments forts
At this point, we have enough pints of pickled peppers in the pantry — 9 or 10. So I'm going to try something else with the peppers I gathered last week as this, as I pulled out the plants ahead of the arrival of winter. I'm going to make pepper paste or hot sauce. The problem is, I haven't yet found a tempting recipe or method. Do I cook the peppers first? Put them up raw, either chopped or pureed? De-seeded, or seeds and all?

I'm going to try this method...

Bring the peppers, vinegar, and water to a boil in a saucepan. Reduce heat to medium-low, cover, and simmer 15 minutes.

Carefully puree the vegetables in a blender until smooth, then return to the saucepan, and continue simmering 45 minutes to 1 hour until thickened to the consistency of oatmeal.

When ready, refrigerate overnight before using.

...based on a recipe that I found here and have adapted slightly. I'll make it using Cayenne peppers.
Posted by Ken Broadhurst at 09:21