Today is October 15 and we turned the heat on for the first time this morning. That's always been the target date for the beginning of the heating season in northern France.

At least in Paris. When I lived there back in the 1970s and early 1980s, we always laughed about the heat in buildings that had "collective" heating systems. The radiators would get warm for the first time every year on October 15, and they would go cold on April 15. Whether it was freezing cold on October 1 or steamy hot on April 1, that's how the heat worked. 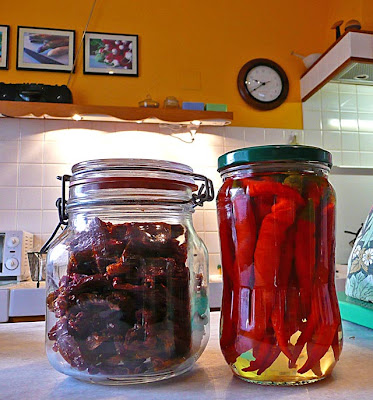 Summer's heat stored in jars of
oven-dried tomatoes and pickled cayenne peppers
In fact, when I lived in Paris the last time, it was for three years in a little apartment just off the rue Montorgueil, near Les Halles, that didn't have central heat. I had an electric radiator that was on wheels. You could roll it from room to room, plug it in, and get some heat. "Room to room" is an accurate statement, since the apartment did have exactly two rooms! Actually, it was smaller than our living room here in Saint-Aignan, and much smaller than our new upstairs bedroom suite.

I was surprised a few days ago when I read in Starman's blog, Le Rêve Français, that on October 4, his first day in Paris (and 11 days ago), that nothing has changed on the heating front. He wrote:

“...the weather has become as bad as I expected, wet and cold, and there will be no heat in the apartment until 15 Octobre....brrrr...”

I hope Starman's heat is on this morning, because it's quite chilly outside. Temperatures are in the high 30s F here in Saint-Aignan — it's probably a little milder in Paris — and Walt just came back from the morning walk reporting that there are patches of frost on the ground out in the vineyard. 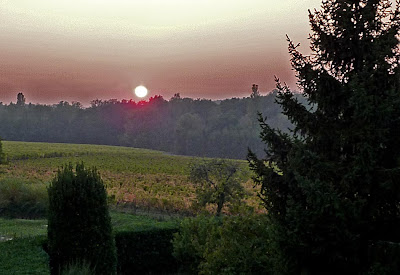 Yesterday's sunset
I can now report that our heat is working just fine. The temperature in the house is climbing up into the 60s (it's 17ºC upstairs where I sit). The radiators up here are toasty. I actually turned them down a little — they have thermostatic controls, which the radiators downstairs don't have.

Outside, things might be heating up again, from what I'm hearing on the news. I'm talking about politics. Labor leaders are calling for another strike day next Tuesday, after their successful show of force earlier this week. The Paris subway system is running a normal schedule again, though some of the RER lines still have reduced service. A lot of rail lines, including TGVs in and out of Paris, are still operating only half to two-third the normal number of trains. 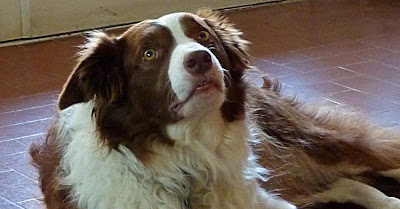 Callie scans the living room ceiling,
looking for a fly, moth, or spider to bark at.
Meanwhile, the high schools and universities have caught the bug. Many campuses around the country are closed because of strikes and demonstrations. Student leaders are saying that making older people work longer means fewer jobs for young graduates.

And then the oil refineries are not yet operating at full capacity. The government is assuring the public that there are sufficient stocks of gasoline and diesel fuel to get the country through the crisis without crippling shortages at the pump. We shall see. 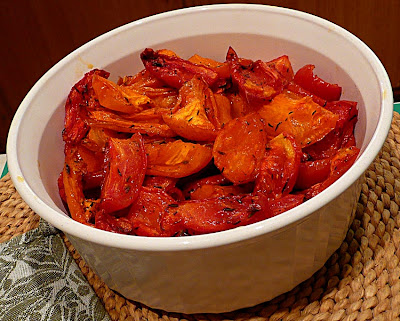 Yesterday I picked the last tomatoes and
made another batch of tomates confites.
We burn fuel oil, which is about the same thing as diesel fuel, in our boiler, to heat up the steam radiators. We bought 2,000 liters of fioule domestique in September, which should get us through the winter, unless it turns really cold. We hit it at just the right time, when the dollar was high and the fuel oil was abundant.

And as for the heat, today is the first day we've felt the need to turn on the boiler, but we've already had fires in the wood-burning stove several times this season. Including yesterday afternoon, when the house felt chilly but the sun was shining brightly outdoors. A fire in the stove downstairs sends enough heat up into the new loft that you can definitely feel it.
Posted by Ken Broadhurst at 08:36