Pride goeth before the fall

Last Sunday morning I got up late. Late for me, anyway. I've always been an early bird. So Sunday when I woke up and saw it was 7:20, I was surprised.

I got out of bed, got dressed, and made my way downstairs. As I do nearly every morning, I put water in the kettle and set it on the stove to heat up. I got down the teapot and put a teabag in it.

Next I got a pouch of cat food out of the box next to the refrigerator and put it in one of the blue plastic bowls that Bertie eats out of. I walked out of the kitchen with it to the stairs that go down to the entryway and garage. 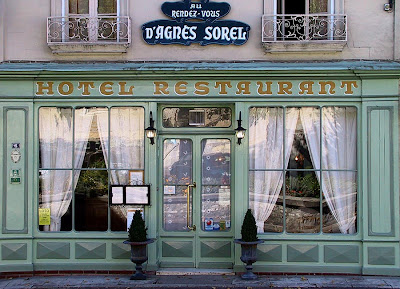 27 October 2005
the Restaurant Agnès Sorel in Genillé, near Loches

As I passed through the doorway, I thought about pushing the light switch that turns on the ceiling fixture in the entryway. But I walked on past it. "Oh, there's not need to turn it on. There's a nightlight down there anyway," was the thought that went through my mind.

I started down the stairs, which are made of travertine, a kind of limestone. They are wide and they curve down, making a half-turn before they reach the lower floor. It was 7:30 by now, but it was still pitch dark.

27 October 2007
La Renaudière and its vineyard

I was nearly at the bottom when I suddenly felt myself step into what felt like thin air. As I fell, I felt the heel of my right foot catch the edge of a step. I think it was the next to last step going down. I don't know if I hit the bottom step too, but I do know that I hit the tile floor pretty hard.

By then, I was vocalizing, but "Oh no! Oh no!" was all I could say. I was sure I had broken my ankle in the fall. I heard Walt answer me from two floors up. He was obviously on his way down the stairs. 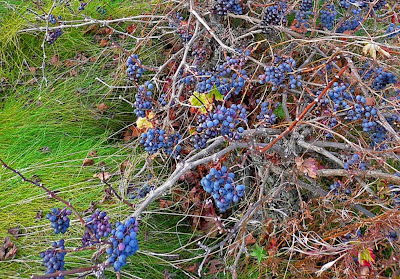 I was lying there in a puddle of cat food. It's the wet kind — some kind of little meatballs in a goopy sauce, a gelée. Bertie loves it.

My first impulse was to stand up. I did it. So nothing was broken, I thought. Good. I started picking up little pieces of cat food off the floor and the rug. Most of it was on the tile floor. I remember being on my hands and knees, scooping up bits of ground meat and globs of gelatin and putting them back in the blue bowl. I'm glad it's unbreakable. 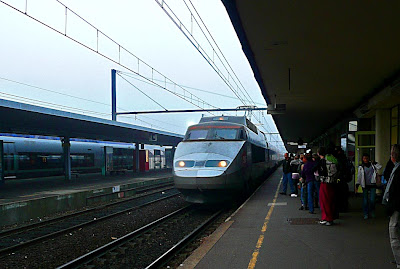 27 October 2009
Walt was taking the TGV to Paris, on his way to New York.
It was also the day of our friend Jean-Luc's funeral.

That's how I sprained my ankle for the second time in five years. The last time must have been in the summer or autumn of 2005, just before I started this blog. I can't find anything about it in my old posts. That afternoon, I was just walking down the gravel road through the vineyard, I remember, and stepped either on a rock or into a hole and my foot turned over. It was very painful but I managed to limp the rest of the way home. I never actually fell down.

This time, nothing was broken and I thought the best thing to do was to walk a little, so after I fed the cat I took the dog out for her regular walk. I walked quite a ways, in pain, but not excruciating pain. 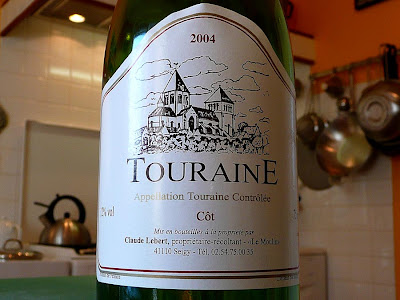 27 October 2010
Côt/Malbec wine from one of my favorite vintners
near Saint-Aignan — very good for easing pain.
That's the Saint-Aignan church on the label.

The excruciating pain came later in the day. I took some of the anti-douleur pills Walt got from the pharmacy when he hurt his cervical vertebrae while working on our painting last summer. I moaned and groaned all afternoon. The swelling set in.

Yesterday I thought my right foot looked kind of like a manatee. Ever walked on a manatee? The manatee doesn't like it. It's painful. But by Monday, and since, the pain hasn't really been too bad. I just have to take it easy for a few more days and avoid any more accidents. Soon, I hope, I'll be back to normal. And I'll be able to go for another walk with the dog.
Posted by Ken Broadhurst at 07:09