The weather has turned beautiful again but the sun sure does come up late. Soon we'll change over to standard time again — in France it's called heure d'hiver, winter time — and the sun we come up a little earlier but go down very early.

Because it's pretty dark in the morning when I walk the dog, I'm not taking many pictures. Even the ones I do take come out blurred. I don't want to carry a tripod on my walks with Callie. Yesterday afternoon was warm and sunny, but I didn't take my camera out because we took an abbreviated walk. Walt and I were meeting people down in Saint-Aignan for drinks at 6:30. 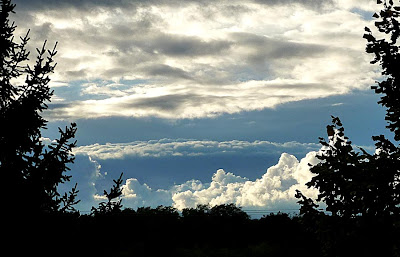 Recent skies at sunset
Yesterday I did my annual cleaning of the hedge. That means going around and finding all the blackberry and other vines growing up into the bay laurel hedge and clipping them off as close to the ground as I can. I also cut out some wild rose and holly bushes, along with some ivy. That annual trim, along with the annual pruning, keeps the hedge in good shape.

The grape harvest continues. I still see rows and parcels of vines where the grapes are still hanging. Most now have been taken in, though. Callie doesn't like the harvesting machines and tractors — they scare her — so that also changes the nature of our walks. 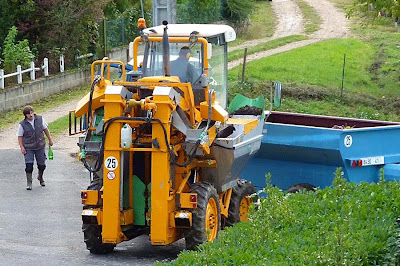 Dumping the harvested grapes into the trailer
for transport back to the winery
The people we met for drinks down at Lily's wine bar in Saint-Aignan were Australians who have been visiting this week. They rented a little house on the main square in town, and have been traveling around to châteaux (Chambord, Chenonceau, Valençay) and wineries. We had a warm evening (now that the rains have let up) and we sat outside until just after nine enjoying a good local Sauvignon Blanc. 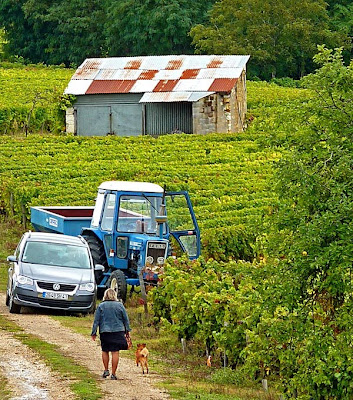 A neighbor walking her little dog out in the vineyard —
all pictures taken from our back windows
Two English-speaking friends (one English, one German — both of them also speak French) happened along while we were sitting at the café and each joined us for a few minutes and a glass or two. We meet so many nice and interesting people because of our blogs...
Posted by Ken Broadhurst at 07:44