Bacon, and bringing it home

First, the cooking situation. We have two silicone baking mats or pads that we use all the time, for cooking all kinds of things — tomates confites, oven-dried tomatoes, bacon, meats, vegetables, cookies, biscuits, other breads, and on and on. The nice thing about these mats is that they are non-porous and non-stick. Really, nothing sticks to them. Besides, they are easy to wash with dish-washing liquid in hot water. Then you dry them between two towels, roll them up, and store them in a drawer. 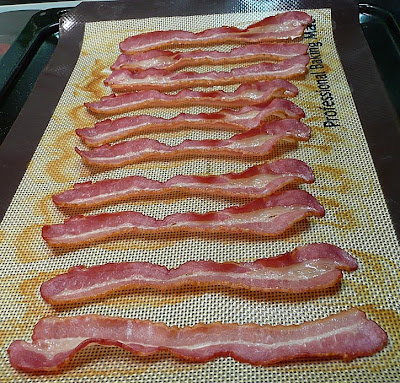 Bacon (fines tranches de poitrine fumée de porc)
Thin-sliced bacon (American-style) is the latest product we've found easy to cook on the baking mats. It browns and crisps up really nicely on a silicone mat on a baking sheet in the oven. It's a lot less messy, and you don't have to watch it so closely if you cook it at a fairly low temperature (150ºC/300ºF). The bacon cooks evenly and doesn't burn. We've been eating a lot of BLTs over the past few weeks, since the tomato crop came in. 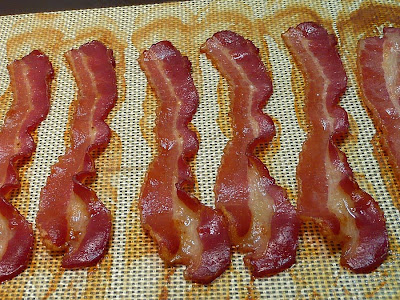 No mess, no fuss — no burning, no sticking
One of the mats we use is a Fiberlux product that we've had for at least 8 or 9 years. I know because I remember that we used it in San Francisco before we moved to Saint-Aignan in 2003. Fiberlux mats are available at this store in St. Louis, for example. Amazon.com sells baking mats too. One of the best-known brands is Silpat. The second baking mat we use is one I bought in a chain store in North Carolina a year or two ago.

And then the French political situation: Today is another big strike day in France. The RER line that takes passengers from central Paris out to Roissy/CDG airport has only 20% of the normal number of trains running on it. Other lines, including the Paris metro and the railways across the France, are also running on significantly reduced schedules. Unless people who aren't on strike take the day off and stay home, that means heavy traffic on the highways, especially around Paris and other big cities.

Reports yesterday said about two-thirds of people polled in France think the strikes are justified and support the workers. There will be mass demonstrations and marches in Paris and other big cities today, and the unions will claim that millions turned out to protest while police officials will assess the numbers much lower.

The labor unions are trying to show how unhappy working people are about government policies. The weather is beautiful right now, so a lot of people will take to the streets today, I'm sure. And the strikes this time are reconductible — of indefinite length — for the first time in a while. Usually labor leaders call for a 24- or 36- or 48-hour strike to make their point. This time, unions member will vote daily to decide whether or not to go back to work the next day.

The issue is the Sarkozy government's changes to the public retirement system. At this point both the French National Assembly and the French Senate have approved a plan to raise the earliest retirement age from 60 to 62 years old, and from 65 to 67 for full benefits. Polls put President Sarkozy's approval rating at 31%, a record low. The number of people who think the Prime Minister is doing a good job is just slightly higher at 37%.

Rumors are that Prime Minister François Fillon will leave the government later this fall. And President Sarkozy will most likely stand for re-election in May 2012. Whether these strikes will have any real effect on the retirement plan reforms or national leaders' re-election chances remains to be seen.

Meanwhile, Walt and I are going to drive over to Tours this morning to do some shopping that we've been putting off for a while. We need a few pieces of furniture to make the downstairs living room and guest room more functional. We're having company over the next few weeks, including houseguests. And of course we need some kitchen things. I'll let you know tomorrow whether we see any evidence of today's strikes while we are out an about in the big city of Tours.
Posted by Ken Broadhurst at 09:05