A different view of Thursday

Yesterday I got my hair cut by Madame Barbier down in the village. We had a nice chat about local happenings and current events on the national level. The café-tabac across the road from Madame Barbier's shop has been sold, for example. It was closed for inventory yesterday, and the new owners will be open for business today.

I heard the man who was getting his hair cut when I arrived for my 10:30 appointment tell Madame Barbier that he had been fishing. He has caught three fish in the Canal du Berry recently, he said — the canal ends over in Noyers-sur-Cher, where it dumps into the Cher River. At least one of the fish the man caught was a brochet, I heard him say. I'm not sure what the others were.

The brochet, or northern pike, is a prized catch. It is one of the largest freshwater fishes, and it puts up a good fight when hooked. It's bony if fried, but baking a brochet causes some of the fish's small bones to dissolve so that the flesh, white and tasty, is easier to eat. It's been a food fish since at least Roman times. The most famous way to prepare the flesh is in the form of the dumplings called Quenelles de brochet. 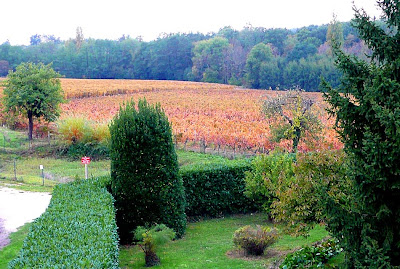 Yesterday morning's freeze turned the grape leaves
orange, brown, and red.
Madame Barbier also told me that Valentin Ledys, who has opened a new winery in our neighborhood, is a young man who has just finished his studies in oenology. His father, who was also in the wine business, was killed in a car accident a few years ago, she said. The son probably inherited some vineyard parcels, because he already has his label on the market. I bought a bottle last week at the little grocery store in the village. I haven't been to the winery yet.

While I was getting my haircut, Walt went over to the garden equipment store over in Noyers to pick up our chainsaw. It had needed a minor repair, and the chain needed sharpening. They say it's in good working order now. Walt also went to Intermarché to get some eggs and bacon. He said the filling station there seemed to be open for business, and he didn't see any long line of cars waiting to refuel. We didn't need a fill-up anyway.

Then we drove over to a village about five miles east of Saint-Aignan to see some friends who had a small crop of turnips they were ready to harvest. They had called to offer us the turnip greens, and I was glad to get them because we didn't grow any greens this year. My grandmother's greens of choice were turnip greens, though my mother, when she had a garden, usually grew and cooked collard greens, as I do. I'm not sure I'd ever cooked turnip greens before, at least not in quantity, but that's what I did yesterday afternoon, for the freezer. 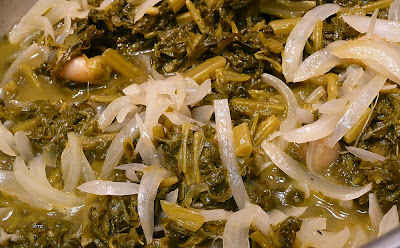 Turnip greens stewing with sliced onions
in duck fat and white wine
On the way, I almost forgot to say, we stopped and bought some wine from one of our favorite Saint-Aignan viticulteurs. He told us he finished les vendanges, the grape harvest, about a week ago. He was obviously very busy pressing grapes, but he took a minute to wait on us. He said the grapes this year are about like in 2009, with maybe a touch more acid. The 2009s are good.

After lunch, Walt went out and pruned back four big bushes in the yard for the winter, including two hazelnut bushes. He was ambitious. I, however, got involved in a silly but entertaining French movie from 1996, on TV, and spent the afternoon watching it and relaxing, while the greens cooked. Oh, and then I went for a long walk in the vineyard with Callie.

That's a day in the life. Retirement, you know.

On the political front, overnight President Sarkozy took another big step to try to end the ongoing fuel shortages and strikes. He had the government "requisition" — réquisitionner — a big oil refinery in the Paris region. The striking employees were told that they were requisitioned too. In other words, they must return to work for the public good or face legal sanctions. Strikers say their constitutional right to strike has been violated, since they are being threatened with prison sentences if they don't return to their jobs.

Meanwhile, labor leaders voted yesterday afternoon to call for another round of demonstrations and marches next Thursday and again on November 6. By then, the pension-reform plan will probably have been voted by both houses of the legislature and signed into law. Sarkozy's strategy is to get the law passed quickly, because, as one commentator said, what's the point of protesting a law that has already gone into effect?
Posted by Ken Broadhurst at 09:11