It was supposed to rain overnight. The room felt stuffy when we went to bed, so I opened the north side window for some ventilation — temperatures are very mild. But then I woke up at 2 a.m. to the sound of a mosquito buzzing in my ear.

I realized I had been bitten twice on the forearm. It itched like crazy. I went to turn on the electric fan because mosquitoes can't fly as well in an air current. Of course the fan was in the back of a deep closet so I had to fumble around, muttering to myself, as I looked for it, tried to get it plugged in, and then find the power button to turn it on. I stumbled back to bed. 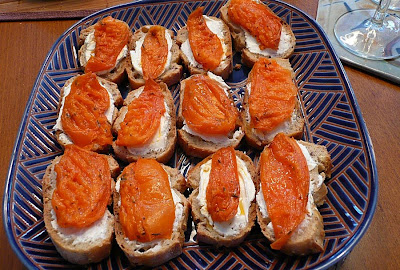 Slow-roasted yellow tomatoes on baguette slices
with cream cheese — a recent lunch...
I finally got the fan going and that did take care of the mosquito. When Walt got up this morning he said he had two bites on his forehead and one on the end of his nose. He also reported that he had killed not one but two mosquitoes that he saw sitting on the wall over the bed before he came downstairs.

We hardly ever have mosquitoes here. Flies, some. Moths, a lot. Bees. Bats. Birds. But few mosquitoes. It's just that the weather has been rainy and unseasonably warm for a few days. 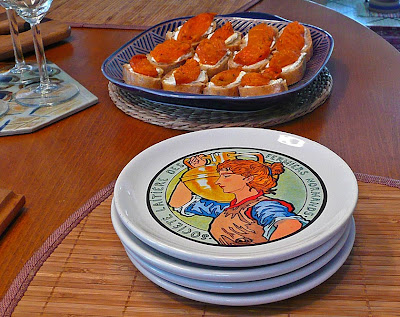 ...with Bill and Sharon on Saturday
This morning, I took the dog out earlier than usual, because it hadn't really started raining at that point but the radar weather site we look at (MétéoX) showed a storm moving toward Saint-Aignan from the south. Callie and I just had time to get in a good walk between 7:30 and 8:15 before a steady rain started falling. 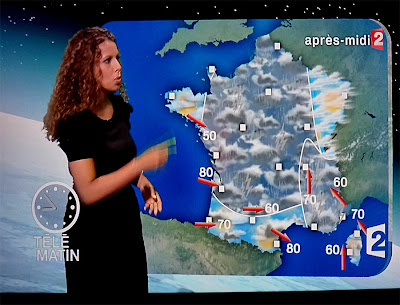 Today's weather forecast for France — right after I took this picture
the satellite dish lost the signal and the screen went blank.
That's how thick the clouds and rain are.
One of the first things I noticed when I went out was that the leaves on the vines right out behind our back gate have suddenly changed colors. They were still green a couple of days ago, but this morning many of them had turned a bright yellow color. It happened all of a sudden. Wonder if it has to do with the fact that those grapes were harvested Saturday afternoon.

Callie and I walked down the hill on the north side of the house, where there are two parcels of vines (Pineau d'Aunis up higher, and then Chardonnay on the lower section). We were just ambling along and suddenly Callie took off running on down the hill, around a corner where I couldn't see what she was doing. She had seen some animal or another, I was sure. 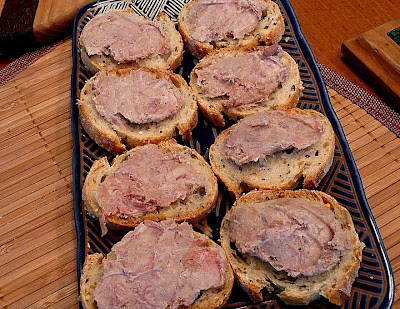 We also had duck rillettes (potted, shredded duck).
I started calling her and following her down the slope. At least I thought that was where she had gone. There are more vines down there — red grapes that haven't been harvested yet. I was looking into the gloom for Callie when suddenly a little brown head popped out from between two rows of vines.

It was a fawn and it was startled. It took off running up the row, with a kind of clopping sound. I had time to get a good look at it before it disappeared. It wasn't any bigger than Callie. That made it one of the smallest fawns I've ever seen around here. And then Callie appeared. I assume she had chased a different fawn down the hill, but she obviously didn't catch it. I'm not sure what she would do if she did catch one. 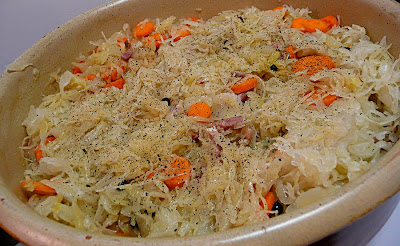 Yesterday I cooked sauerkraut (recipe), which we ate with
a smoked chicken and some Montbéliard sausages.
I picked another big basketful of tomatoes as I came back into the garden at 8:15. The rain was starting and I wanted at least to go get those tomatoes in. There are plenty more out there, but with the rain coming down and a full basket, I had to call it a morning. Now I need to go trim up and process those tomatoes.

It's a rainy Monday and we don't have to go anywhere. We have onion tart left for lunch (see Walt's blog post yesterday) and, obviously, plenty of tomatoes. Tomorrow I'll have to go out with the car to run errands. Maybe the rain will be over by then.
Posted by Ken Broadhurst at 09:15