The French prime minister, François Fillon, says it will take four or five days to get the fuel supply situation back to normal. Now there are reports that at least a third of the filling stations in France are short on fuel, if not entirely out. Diesel seems to be the hardest to find..

Overnight, three fuel storage depots, one in Le Mans, another at La Rochelle, and the third down at the mouth of the Loire River, west of Nantes, were retaken by police, ending blockades set up by workers and union members. At the same time, France 2 news is reporting that strikers removed by force from the blockades out at Donges, near Nantes, have set up barricades blocking the roads leading into the fuel depot if an effort to keep tanker trucks away. It's not over until it's over, I guess.

Polls this morning indicate that 80% of the people would like the government to re-open negotiations with the labor unions on the question of retirement pension reforms. It remains to be seen whether President Sarkozy will be swayed by such polls, or whether he and his cabinet will maintain their hard-line position that it's too late to start further negotiations. 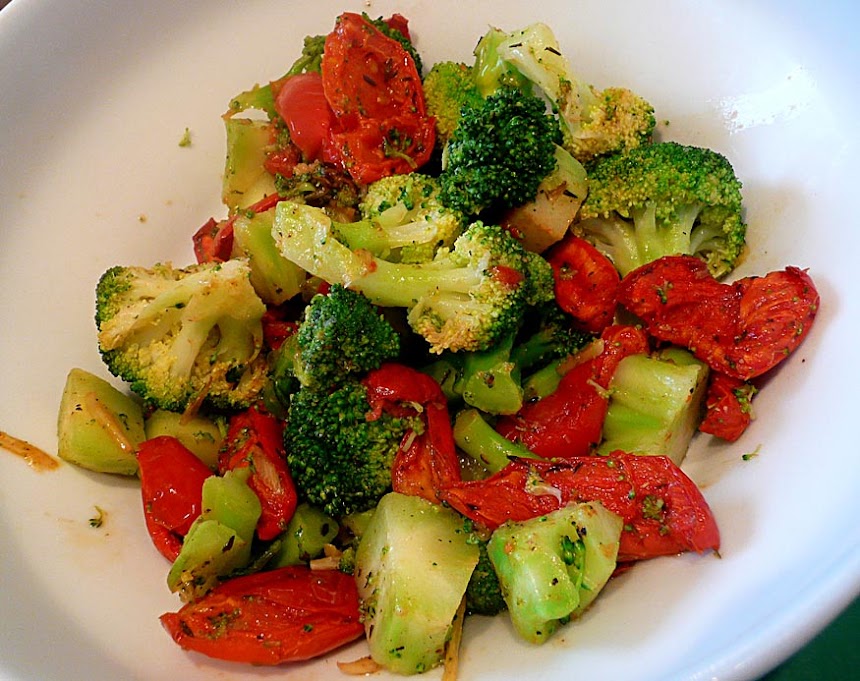 When it's chilly outside and the gas lines are long,
an old man's thoughts inevitably turn to lunch.
Broccoli stir-fried with garlic and tomates confites.
The strike has entered that delicate phase where positions are hardening and troublemakers are starting to make their presence felt. Meanwhile, the Toussaint — All Saints' Day — school vacations begin Friday, so people are going to be eager to get back to their normal lives. That includes the strikers, the demonstrators, and the people who are being inconvenienced by the fuel shortages. The logjam will break soon, and if the government holds out, it will get its way.

On a slightly different subject, today is the fifth anniversary of my first blog post on Living the Life in Saint-Aignan. I can't decide whether to go on strike and demand retirement benefits, or to just go with the flow. I'll be 62 soon anyway, so I'll qualify for reduced benefits no matter what. And if I keep working, at least I can WAH, as we used to say in Silicon Valley. That's "Work At Home."
Posted by Ken Broadhurst at 07:41