We are lucky enough to still be getting aubergines from the vegetable garden. And tomatoes too, but I've probably worn you all out with the subject of tomates.

The vegetable garden is in decline, of course, at this season, but I picked nearly a dozen eggplants of various sizes a couple of days ago. In talking about how we would cook them, Walt remembered something our friend Peter Hertzmann made for us on one of his recent visits. 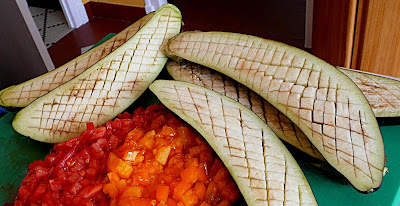 Dice up some tomatoes and score the eggplant halves
It's called Aubergines en pizza, and it's a French recipe Peter says he originally got from Elle à table. I haven't been successful in finding it there, but here's Peter's recipe on his A la Carte site. 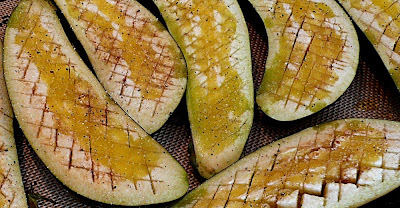 Drizzle some olive oil onto the scored eggplant havles
Also, Walt blogged about eggplant "pizzas" back when Peter cooked these for us here in Saint-Aignan. Here's Walt's post. 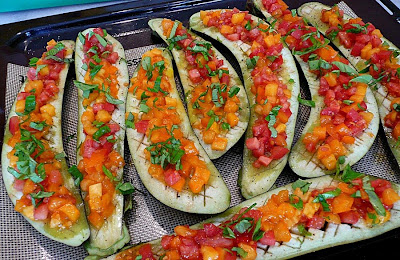 Spread the diced tomato and chopped-up basil leaves
over the eggplant halves
We modified the recipe to use the ingredients we had on hand. Instead of emmental or some other Alpine cheese, we used mozzarella. We used basil instead of oregano. We didn't have anchovies, so we added salt to the recipe. And so on. 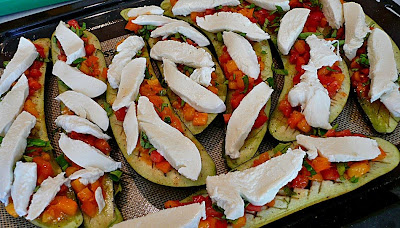 Top with mozzarella or some other cheese
Here's the recipe we came up with. It's a keeper: 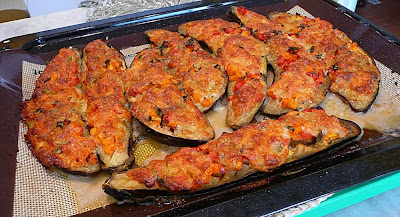 Cut the eggplants in half lengthwise, including the stem. With a small knife, make a series of cuts in a crisscross fashion, spaced about a centimeter apart, into the eggplant flesh but without piercing the skin.

Lay the eggplant halves, cut side up, on a baking sheet. Drizzle some olive oil over them. Spread the diced tomato evenly over the scored surfaces. Sprinkle the minced basil leaves over them and season with salt and pepper. Finally, place the sliced mozzarella over all.

Bake the “pizzas” until the eggplant is tender, about 30 minutes. Serve with olive oil and grated parmesan cheese. 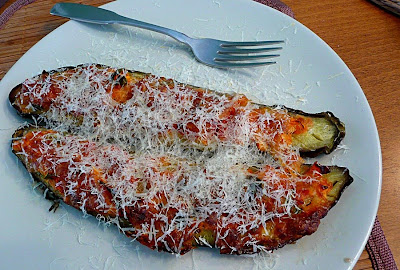 Serve the eggplant pizzas with grated parmesan
I think some garlic mixed in with the diced tomato would be good, and I'll try that next time. And I might try doing the same thing with zucchini/courgettes instead of eggplants/aubergines.
Posted by Ken Broadhurst at 10:02