I'm continuing to blog about the fuel situation in France because according to TF1 news, quoting a government minister last night, the situation could get slightly worse today. The twelve oil refineries in France are still being blockaded by strikers. 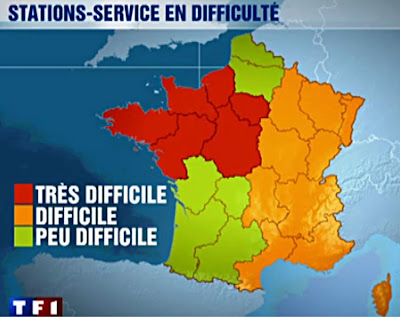 This map shows the fuel situation in different parts of the
country— very difficult, difficult, and slightly difficult.
I think most of the fuel storage depots have been opened up again by police, and tanker trucks are getting in and out. But France is running on reserves, and on refined oil products (gasoline and diesel fuel) being imported from the Netherlands, Belgium, Italy, and Spain. 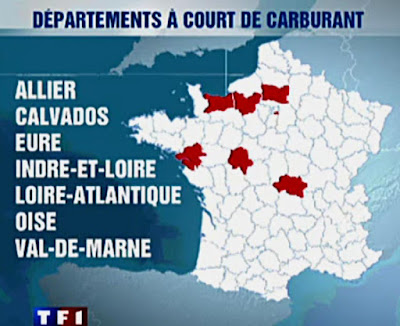 And these departments are the hardest-hit.
Indre-et-Loire is the Tours area, near us.
The government is giving priority to filling stations on the autoroutes — the expressways, which are toll roads. One driver over near Tours, interviewed for last night's news report, pointed out that he not only has to pay high prices for fuel now, but he also has to pay an autoroute toll in order to go fuel up! 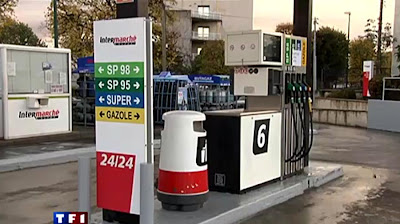 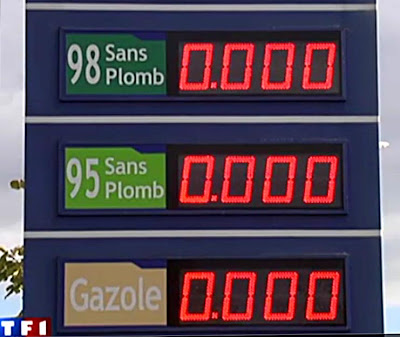 No price posted means there's nothing to sell.
In fact, the government says that 25% of the filling stations in the country are completely à sec — "dry," out of fuel. En rupture. Don't even think of asking for un plein — a fill-up — in most places, unless your tank isn't very empty. Many stations have put limits on how much you can buy at one time in order to spread the available fuel around to as many customers as possible. 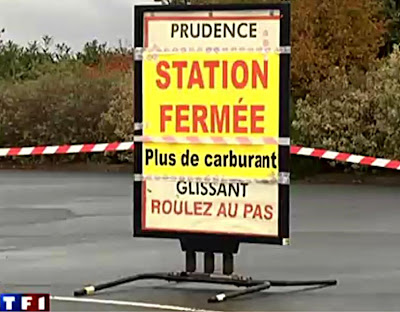 "Station closed. No more fuel."
"Roulez au pas" means "go slow."
Normally, if you have a French credit card with a chip on it and a PIN, you can fill up any time of the day or night, even when the station is unstaffed. Not now, though, because they don't want people filling up jerrycans and depleting supplies.

I'm posting some pictures that I captured off the TF1 (a privately owned channel) news, via the web site, this morning.
Posted by Ken Broadhurst at 08:55