A few days ago I made a batch of what are called Pruneaux au lard fumé in French and "Devils on Horseback" in England. They're an excellent apéritif finger-food. And they're easy to make, though it takes a little time.

I don't know why the English call them Devils and what Horseback has to do with it. Is the Devil the prune or the bacon? There's also a concoction called Angels on Horseback, which is oysters wrapped in bacon and then baked, broiled, or grilled. I guess the Devil is the prune, then, and the oyster is the Angel. The bacon is the Horeseback part, even though bacon is pork, not horse meat. Maybe I'm being too literal.

It's a little like Devil's Food Cake vs. Angel Food Cake, isn't it? 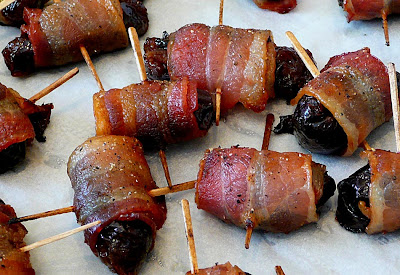 Pruneaux au lard fumé, or Devils on Horseback
Prunes are a good way to preserve plums. In French, the plum is la prune and the prune is le pruneau — plural pruneaux. The most famous pruneaux come from the French Southwest around the town of Agen, and are called pruneaux d'Agen. Evidently, plum trees were brought to Agen from the Middle East at the time of the Crusades, a thousand years ago. They thrived. 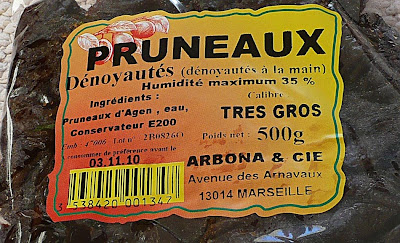 The prunes known as pruneaux d'Agen in France
The dried fruit and the Southwestern town between Bordeaux and Toulouse are an automatic association in France, and Agen prunes are available, whole or pitted, in all the supermarkets. Actually, I've read that a lot of the prunes sold in France are now imported from California.

The ones I used were packaged and distributed by a company in Marseille. They were sold dénoyautés, which means the noyau, the pit, was already removed. And according to the label on the package, they were dénoyautés à la main — by hand, not by a machine. I seldom buy pitted plums, but these looked good and weren't expensive. 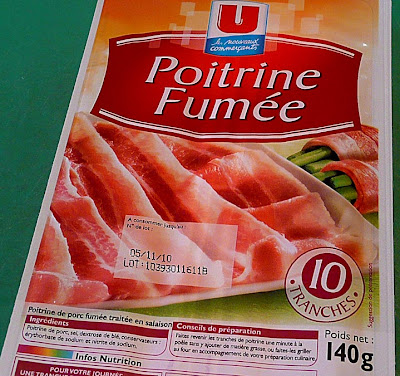 The French equivalent for U.S.-style bacon
is also known as lard fumé.
And I used French poitrine fumée, which is also called lard fumé, because that's the closest equivalent for U.S.-style streaky bacon. What I got was very lean, in nice even slices. It comes from the supermarket. At the open-air markets, a charcutier or charcutière will thinly slice a slab of smoked bacon for you too. Or you can buy the slab and slice it yourself, or cut it up into chunks called lardons for other recipes. 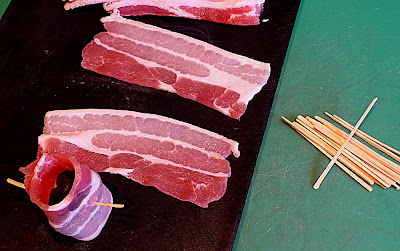 Wrap each prune in half a slice of bacon
and stab it with a toothpick.
To make 20 pruneaux au lard fumé, you need ten slices of bacon. Cut them in half down the middle, because half a slice is long enough to wrap around a prune. Pit the prunes if they aren't already dénoyautés. 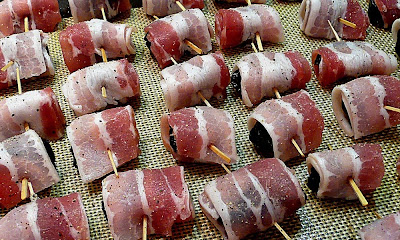 Sprinkled with black pepper and ready for the oven.
Wrap each prune in a half-slice of bacon and attach it with a toothpick. Bake the wrapped prunes in a hot oven for 10 minutes, or until the bacon is browned and starting to crisp. Serve warm at apéritif/cocktail time with a glass of wine — red, white, or rosé.

No strike news from me today. Gas and diesel fuel are still only spottily available around the Loire Valley. The employees of the requisitioned oil refinery near Paris are planning to take the government to court again on Monday to try to get the latest requisition order overturned. Across France, trains are still running on reduced schedules, but not so reduced as before.
Posted by Ken Broadhurst at 09:50