News of the neighborhood

It's so dark! Here it is nearly 8:00 in the morning and there's just the faintest gray color in the little bit of sky I can see. And it's cold too — around 5ºC, which is 41ºF. It's going to be much colder next week, according to this morning's weather report.

The off-camera people seem to have returned to work on France 2's Télématin show. France 2 is the flagship public TV channel here. You can see it in the sets and "production values." I'm not sure what the situation is with public transport in the cities, but the strikes are definitely winding down. 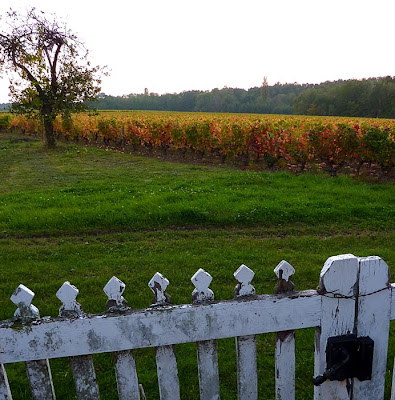 View from the back gate yesterday afternoon, when
there was enough light for picture-taking
It's about time for me to go out for the morning walk with the dog. I might need to take a flashlight with me! And I might have to put on my long underwear. Later today, I think I'd better start bringing some more potted plants in. Some might be killed if we have a frosty morning. 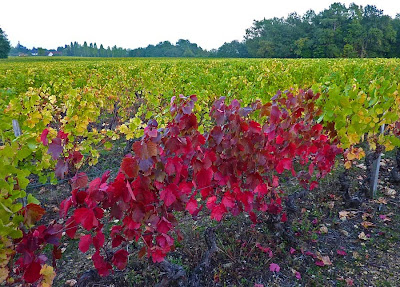 October vineyard views
Others, the annuals, will need to be pulled out and put on the compost pile. It's still not too late to hope for an été de la Saint-Martin, what we call an Indian Summer, but that doesn't come every year. Saint-Martin's day is November 11. November can be very cold... or not. 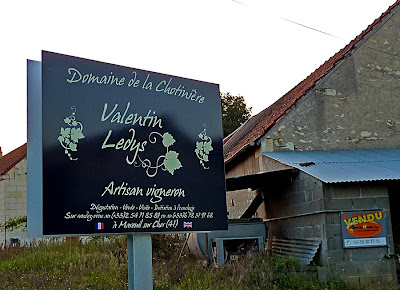 A new winery near La Renaudière, where we live
On my walk yesterday afternoon, I actually did take the camera out. Callie and I took a long walk, down through the woods, then back up by a different road, and on the paved Route Touristique through the vineyards a ways. 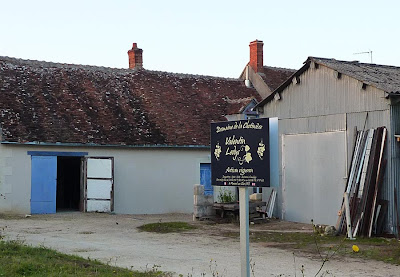 Monsieur Ledys has some work to do to get his place fixed up.
I noticed that an old farmhouse complex that had been for sale has been taken over by an artisan vigneron — a grape-grower/winemaker — and he's put out his sign. He's using the name of the hamlet just east of ours, La Chotinière, for his winery. I guess that's where his vines are planted. Ledys [luh-DEE] is a common family name here in the Saint-Aignan area.
Posted by Ken Broadhurst at 07:54