All the color is indoors

Oh well, it's raining again this morning. As you'll see from the first photo below, there's not a lot of color in the landscape right now. Well, maybe there are colors, but they all tend toward the gray, the violet — the dull. Do you know Francis Cabrel's song called « Octobre »? So far this October, all the color is indoors. 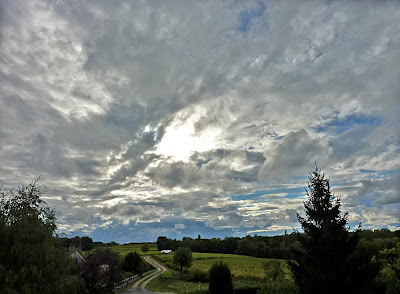 Yesterday morning's view out a back window
And that's only because I picked more tomatoes yesterday morning, as the rain began to fall. The tomatoes just keep coming, and even the constant dampness of the past week or two hasn't yet spoiled them. With this very mild and wet weather, the remaining tomatoes are ripe — ha ha — for an attack of mildew and mold. If the rain lets up for a while today, I'll have to go out and pick some more. 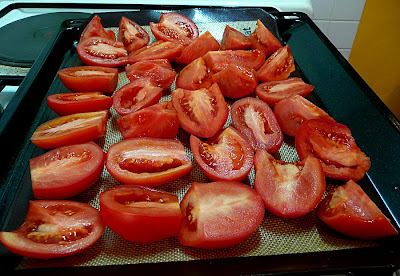 Tomatoes ready for oven-drying
Meanwhile, having the oven on all day is enjoyable. It gives us just a little bit of heat, letting us avoid turning on the central heating system or even building a fire in the wood-burner. Drying tomatoes in the oven requires only a little heat — but it takes some time. Like maybe 8 hours at a temperature around 200ºF/90ºC. Below the boiling temperature, because you don't want the moisture in the tomato wedges and halves to boil, just to evaporate slowly. 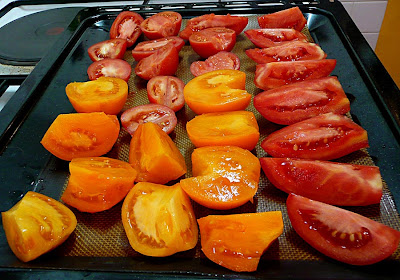 Red and yellow tomatoes, ready
for the oven or the freezer
Drying them is probably the most space-efficient way of preserving fresh ripe tomatoes. Freezing them whole takes a lot of room you might otherwise use for other things in the freezer. Making sauce and freezing or canning it is better, but still... Drying tomatoes reduces their volume exponentially, and dozens of tomatoes end up fitting into a single medium-size jar.

Besides, the aroma is incredible. You find yourself going back to the oven all during the day and opening the door just to smell the tomato aroma being released. And the dried result — the tomatoes are still moelleux when you take them out of the oven — that's leathery and flexible, not exactly soft but not dried until hard or crispy — is delicious. 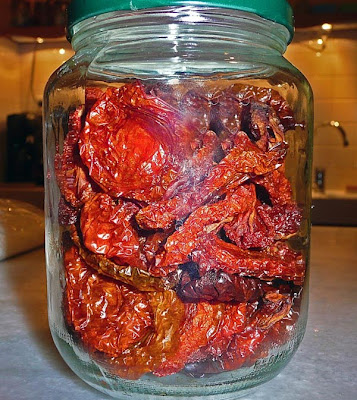 Oven-dried tomatoes sealed in a sterilized jar
Yesterday at the end of the process, after having gradually removed the tomato pieces that seemed sufficiently dried as the afternoon progressed, leaving the softer, juicier pieces to dry some more, I did this: I put all the tomato wedges and pieces back in the oven, along with the jar I planned to store them in and its lid. I turned the temperature up to 120ºC/250ºF and left everything to get hot for about five minutes.

Then I put the hot tomato pieces into the hot jar and, using a kitchen towel so as not to burn my hands, I screwed the lid on tightly. When the jar and its contents cooled down, the lid sealed the way it would have if you had poured boiling hot jelly or jam into it. And it was not only sealed but sterilized. I hope those oven-dried tomatoes will keep all through the winter, down in the cool, dark cellar.

I ran out of room in the oven, so I took another pan of raw tomato wedges and halves and set it in the top of the freezer downstairs. A few hours later, after the pieces had frozen hard, I put them all in a plastic bag and stored that in the freezer. The pieces will come out separately and can be added to soups and sauces all winter. 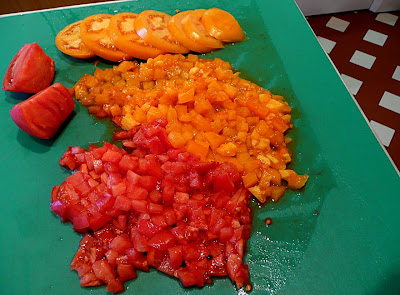 Dicing fresh tomatoes for salsa fresca
And what about eating some of these ripe tomatoes while they are fresh? What about some Mexican-style salsa? Salsa fresca. Finely dice the ripest tomatoes, and then finely chop some onions or shallots. Mince up a big clove of garlic and a hot red pepper. Mix it all together with a dish of hot pepper vinegar or the juice of a lime — or both. Add a dash of salt, a grind of black pepper, and some chopped fresh herbs — cilantro (a.k.a. coriander or Chinese parsley), Italian parsley, basil, or oregano. 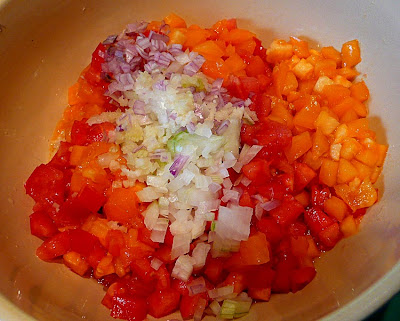 Mix in diced onion, shallot, and garlic
It's good on fish or chicken, with chicken or beef fajitas, with tortilla chips. Or quesadillas (cheese melted inside a Mexican tortilla). Actually, the salsa fresca is good with just about anything. Beans, for example. It's a good idea to make a lot of it, and it will keep for a few days in the refrigerator.
Posted by Ken Broadhurst at 08:18